Monday is voting day and if you still have casting a ballot on your list, here is a roundup of Tyee coverage over the past month’s campaigning to help inform your decision. Dozens of pieces demonstrating the power of reader-supported journalism.

Here’s what we published broken down by issues:

Spending $50 to Collect $5. Canada’s Absurd Access to Information Rules
None of the leading parties offer much hope for overdue reform of a broken system. By Vincent Gogolek

Where They Stand: The Parties on Animal Welfare
Their platforms all tackle animal cruelty. Canada’s first federal election debate on the issue added texture. By Christopher Guly

How to Future-Proof Canada? Pay Parents!
Why aren’t the parties talking about the most important thing we can do to improve the lives of Canadians far into the future? By Crawford Kilian

O’Toole Embraced Kenney’s ‘Resistance’ Child-Care Politics. Why?
The Tory leader echoes Alberta’s no to federally funded $10 daycare. But the objections don’t add up. By Taylor Lambert

Where They Stand: The Parties on Indigenous Child Welfare
It’s been five years since a tribunal ruled that Canada discriminates against First Nations kids. Advocates still await change. By Katie Hyslop

Where They Stand: The Parties on Climate Change
Canada hasn’t hit a single climate action goal yet, but experts say there’s reason to be optimistic. By Michelle Gamage

Are We Going to Fight Climate Change or Not?
We can’t eat our cake and have it too when it comes to fossil fuels. By Michelle Gamage

Where They Stand: The Parties on Fossil Fuel Subsidies
Canada spends $18 billion supporting its oil and gas industry. That should be an election wedge issue, say analysts. By Michelle Gamage

West Coast Doctors Join the Call: No More Fossil Fuels
Our obligation to act on behalf of our patients moves us to call for immediate climate action. By Adam Hoverman and Melissa Lem

Where They Stand: The Parties on Renewable Energy
It’s crucial to lowering emissions. And the federal government can do a lot more to give development a jolt. By Zoë Yunker

The Climate Crisis Inequality All the Parties Are Ignoring
Marginalized and racialized people are hurt the most. Four experts weigh in on what politicians should be promising. By Michelle Gamage

No Matter Who Wins, the Climate Youth Will Be Watching
Five young fighters for action on global warming reflect on Monday’s vote, and what comes after. By Katie Hyslop

You’ve Got Better Chances in Monopoly than in Canada
Somehow, an 85-year-old board game distributes wealth more fairly than we do. By Paul Willcocks

Tax the Rich, and Don’t Be Shy About It
Turn it up slightly higher than what parties currently propose, and we could raise enough to achieve huge things. By Alex Hemingway

Who’s Still Promising Electoral Reform? Fair Voting BC Takes a Look
The Liberals promised change in 2015 and didn’t deliver. Here’s who is keeping the issue alive this time. By Antony Hodgson

Where They Stand: The Parties on Guns
Liberals promise most controls, Conservatives the least and the NDP is unclear. By R. Blake Brown

Where They Stand: The Parties on Housing
Prices are soaring. But the major parties are still determined to prop up homeownership. By Jen St. Denis

None of the Parties Are Willing to Drive Down Home Costs
They don’t want to admit their ‘fixes’ mainly fuel zooming land prices. By Patrick Condon

A Brief History of BC’s Housing Dumpster Fire
The federal government got us into this mess. Here’s how it can get us out. By Jen St. Denis

Why the Greens’ Housing Platform Is the Best
They’re the only party who, instead of fuelling costs, prioritizes non-market housing. By Patrick Condon

The Pace of Reconciliation Has Been Slow Violence
Canada’s next government needs to embrace decolonization and Indigenous self-determination instead. By Liam Midzain-Gobin

Where They Stand: The Parties on Indigenous Child Welfare
It’s been five years since a tribunal ruled that Canada discriminates against First Nations kids. Advocates still await change. By Katie Hyslop

The Parties’ Shared Failure on Long-Term Care
The pandemic has highlighted deep problems in seniors’ care. Our politicians chose to ignore them. By Debra Sheets

The Election Issue That Wasn’t
Systemic racism could still be on the agenda, if only leaders would stop dancing for a second. By Olamide Olaniyan

Does Strategic Voting Actually Work?
A professor of labour studies takes a hard look at the data. By Larry Savage

Where They Stand: The Parties on the Toxic Drug Crisis
NDP and Greens want a national emergency declared, while Liberals tout safe supply ventures and Conservatives focus on treatment. By Jen St. Denis and Moira Wyton

Five Ways to End the Toxic Drug Crisis. From the Frontlines
Harm reduction nurses see the toll. Here’s what they want to hear from politicians in this election campaign. By Corey Ranger

How Bad Does the Overdose Crisis Have to Get Before Leaders Make It a Priority?
Here’s what parties promise on the national health emergency impacting tens of thousands — including me. By Katherine Steinhoff

Beware of Conservatives Bearing Gifts
There’s less than meets the eye to Erin O’Toole’s promise to give workers one representative on some corporate boards. By David Climenhaga

As the election unfolded, our looks at the parties and their campaigns included reportage…

In Northern BC, Women Candidates Are Challenging the Status Quo
From Indigenous rights to poverty and health care, these political hopefuls bring lived experience to tough issues. By Amanda Follett Hosgood

Trudeau Unveils Platform to ‘Finish the Fight Against COVID-19 for Good’
Liberals are the first party this election to fully cost their policies. Price: $78 billion. By Michael Harris

This Was Supposed to Be the Green Party’s Moment
For years its main focus was the climate crisis now clearly arrived. Will noisy divisions rob it of candidates and votes? By Christopher Guly

Anjali Appadurai’s Campaign for a New Politics
Like many NDP candidates she’s shifting from activism to seeking office. Why run for Vancouver Granville? ‘Something big needs to happen.’ By Zoë Yunker

Wilkinson Defends the Liberal Climate Record: ‘We’ve Changed the Trajectory’
Emissions have not dropped under their governance. Still, the North Van candidate insists the plan is working. A Tyee interview by Andrew MacLeod

The Election So Far Through the Lens of a Top Pollster
Darrell Bricker of Ipsos on O’Toole’s message savvy, Trudeau’s pandemic edge, whether polling is poison, and more. A Tyee interview by Michael Harris

‘On an Ugly Trajectory.’ Can We Fix Our Election Culture?
Digital media expert Chris Tenove on candidate abuse, online extremism, effective responses and more. A Tyee interview by David Beers

The Young and the Zestless
Young people are increasingly skeptical of our political system. Here’s how to restore our trust. By Naia Lee

…commentary (serious and less so) at the milestones…

Trudeau Streaks for the Gold
Opponents hobbled by self-inflicted injuries, the PM aims for a big win. But who’s cheering? By Michael Harris

Please Advise! What’s This Election About?
In case you’ve missed the big issues (at least to Dr. Steve), here’s a handy guide. By Steve Burgess

This Pandemic Election Is a Crime! Also, This Pandemic Is Over!
Decoding Kenney doublethink. Plus, what may lie behind that terrible Willy Wonka attack ad against Trudeau. By David Climenhaga 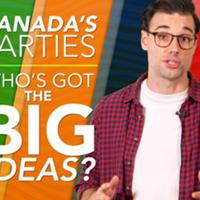 Which Parties Have the Big Ideas This Election? Watch This Video

We Needed a Debate. We Got a Snark Fest
What a mess of a format. No candidate won, watchers lost, and key facts never had a chance. By Michael Harris

Why Should Anyone Believe Erin O’Toole?
His base puts him in a tricky spot. So he’s campaigned as a trickster. By Paul Willcocks

Which Parties Have the Big Ideas This Election? Watch This Video
We face vast challenges. Here are the 10 most sweeping responses being promised. By David Beers