In a bid to jump start a sluggish campaign, Liberal Leader Justin Trudeau today released the party’s official platform, a fully costed suite of policies costing $78 billion over the next five years.

So far, the Conservatives, the NDP nor the Green Party have released any costing for their platforms, which were released much earlier in the campaign.

Not surprisingly, Trudeau stressed that COVID-19 was “the crisis of the century,” and vowed that “finishing the fight against COVID-19 for good” was his main focus. He reiterated his policy that all federal employees must be vaccinated, and at one point took a swipe at people who choose not to get the shot. “I have no patience with those people,” he said.

The Liberals plan to create a COVID-19 proof of vaccination fund of $1 billion that would be available to provinces and territories which implement a requirement for proof of vaccine credentials in their jurisdiction “for non-essential businesses and public spaces.”

A Liberal government would continue to procure enough vaccines to ensure all Canadians have free access to COVID-19 booster shots, and second generation vaccines as needed. In addition, the Liberals would invest $100 million to study the long-term health impacts of COVID-19 on “vulnerable populations and children.”

With five million Canadians not having access to a family doctor, the Liberals announced a new expenditure of $6 billion to address the issue. Part of the plan is to invest $3.2 billion to hire 7,500 new doctors, nurses and nurse practitioners over four years, commencing in 2022.

A Liberal government would also offer tax incentives and student loan forgiveness to health-care professionals who opt to set up shop in rural communities. To further ease the strain on medical resources, the Liberals would invest $400 million over four years to expand virtual health-care services to deliver primary care to Canadians “from wherever they want.”

The Liberal platform also highlights the party’s answer to soaring housing costs, containing a policy for both young Canadians who face prohibitive rents, and those who want to buy a home, but can’t afford to get into the market. Housing is a top of mind issue in Toronto’s seat-rich 905 belt around Toronto, and a big factor in expensive markets like Vancouver.

First-time home buyers under the age of 40 can open a tax-free first home savings account. Under the plan, Canadians could save up to $40,000 toward their first home, withdrawing it tax-free to put toward a down payment. “This would allow young Canadians to set aside 100 per cent of every dollar they earn… tax-free in, tax-free out.”

For renters, the Liberals would set aside $1 billion in loans and grants to develop “rent-to-own” projects with private, not-for-profit and co-op partners, a move the party says would create “a pathway to homeownership for renters in five years or less.”

Other measures on the housing file include the pledge to “build, preserve or repair” an additional 1.4 million homes in four years, and a Home Buyers’ Bill of Rights to ensure a more fair and open buying process.

The Liberal platform includes several measures to assist businesses and other sectors hit hard by COVID-19. The Canada Recovery Hiring Program will be extended to March 31, 2022, allowing struggling companies to hire more workers. That would include temporary wage and rent support of up to 75 per cent of their expenses “to help them get through the winter.”

One of the more interesting planks of the Liberal platform is the pledge to protect Canada’s freshwater, a subject that takes on tremendous importance against the backdrop of a rapidly escalating water crisis affecting millions of people in the United States.

The Liberals would “establish and fully fund” a Canada Water Agency in 2022 to co-ordinate federal freshwater efforts. They would also “modernize” the 50-year-old Canada Water Act, and invest $1 billion over ten years “to restore and protect large lakes and river systems.”

On the research front, the Liberal platform sets aside $37.5 million over six years to support freshwater research being carried out at the Experimental Lakes Area in Ontario, a program the Harper government cut.

How would the Liberals pay for it all? In part, by new taxes. Taking a page out of the NDP playbook, the Liberal platform contains a new three per cent tax on the largest banks and insurers, and a minimum tax rate for “top earners.” One of NDP Leader Jagmeet Singh’s signature promises during the campaign has been to make the rich pay their fair share of taxes. 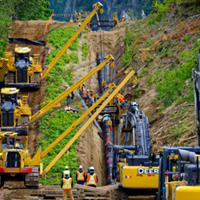 Where They Stand: The Parties on Climate Change

In addition to the three per cent surtax on banks and insurers, a re-elected Liberal government would bring in a vaping tax, and an anti-flipping tax to discourage predatory speculation in the housing market. But at the end of the day, the government plans to spend three dollars in “new investments” for every dollar of new revenue. The Liberal platform sets no date for balancing the budget, and Justin Trudeau mocked Conservative Leader Erin O’Toole who has declared that he would balance the books in ten years without cuts to services, a pledge the Liberal leader referred to as “magical thinking.”

When pressed on whether or not he cared about deficit reduction, Trudeau said that he believed in living “within our means,” but that Canada still had a strong debt-to-GDP ratio, and a strong fiscal position compared to other G7 countries.

The release of the Liberal platform comes with the party in a virtual tie with the Conservatives according to the latest polling from Nik Nanos, and Statistics Canada reporting the first quarterly contraction of the economy since the initial lockdowns of 2020.