Last Saturday, the federal Liberal party became the first to mention one of B.C.’s most emotionally charged issues.

Liberal candidate for North Vancouver and Minister of Environment and Climate Change Jonathan Wilkinson announced that, if elected, the Liberals will “move forward to help British Columbia protect old-growth forests” by establishing a $50-million fund and reaching a “nature agreement” with the B.C. government.

The announcement made the rounds in environmental social media circles and elicited a surprising response from many happy just to see any sort of announcement surrounding old-growth forests.

Old-growth logging has been on the forefront of news in B.C. for months now. Premier John Horgan and the B.C. government have been notably silent on the issue since the announcement of a two-year deferral in the contentious Fairy Creek area in June, even though the protests there have remained active.

Wilkinson’s announcement subtly draws attention to Horgan’s silence. The Liberals are prepared to help British Columbia protect old-growth forests. Probably because the provincial government seems to not have any interest in tackling the issue themselves.

The problem with Wilkinson’s promise, however, is that the federal government has essentially no jurisdiction over forest management in B.C. The province makes the rules when it comes to forestry, in addition to owning approximately 95 per cent of B.C.’s timber.

But Horgan has shown he isn’t prepared to do much of anything when it comes to responding to demands from First Nations, protesters, small communities or ecologists for better forest management.

Despite it being well over a year ago that Karen Price, Rachel Holt and Dave Daust showed the shortcomings in how the province quantifies what is old-growth forest, the provincial government still maintains that 23 per cent of B.C.’s forested area is old growth (Price et al. put that number closer to three per cent).

A provincially commissioned strategic review of old-growth forest management in B.C., called “A New Future for Old Forests,” was released internally in April 2020, and publicly in fall 2020, though it took Horgan until June 24, 2021 — after the conflagration in Fairy Creek — to announce a technical advisory panel to deal with the issue. In other words, the province is dragging its heels.

But Wilkinson and the federal Liberals may have offered Horgan an escape with their announcement. A $50-million federal fund could be used to buy out controversial areas like Fairy Creek and sweep the larger forest management issue under the rug. With $50 million, the province could easily cover forest company Teal-Jones’s investment in the cutblocks in the watershed, while also likely leaving some money for local First Nations and other communities. This would help resolve the acute issue at hand, while punting the chronic problem down the road.

Because $50 million is a single burning plant in the raging wildfire that is forest management in this province.

B.C. Timber Sales, the province’s own forestry company, provides three times that to local communities each year. Wildfires have cost the province an average of $265 million for the last 10 years. In 2020, softwood lumber exports from B.C. totalled almost $4 billion.

The logging of old growth and previously unlogged forests is still a major part of B.C.’s forest industry, and to think that $50 million dollars will meaningfully contribute to solving those problems would be naive. 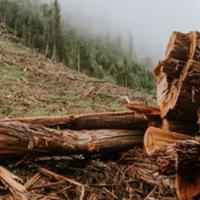 Fairy Creek Got an Old-Growth Deferral. Now Some First Nations Call for More

But perhaps both the provincial and federal governments are hoping British Columbians are naive when it comes to old-growth forests.

Fairy Creek may be home to several beautiful stands of giant trees, ones that certainly deserve protection. But what constitutes old-growth forests, and what constitutes the true, intrinsic value of a forest is highly variable across this province. Intact stands of trees, regardless of age, help filter our water, stabilize the land and suck carbon dioxide out of the air. Enormous red cedars and Douglas firs may inspire us and move us, but the value of a hillside of open-grown ponderosa pines, of vast bogs of black spruces and tamaracks, or of streamside cottonwoods full of birds’ nests are not easily quantifiable.

A nominal fund to purchase the protection of a few stands of forest will certainly do some good, but it won’t carry much overall weight when forest management in this province is focused on turnover times, wood volumes and maximizing shareholder value, on a few tens of millions of dollars, rather than on what these forests truly hold.