A federal election has been called for Sept. 20. What do you think the big issues will be?

Ah Summer, where have you gone? It's still August and already the writs are dropping. At least we will have a final summer treat before the season officially expires — maybe a bunch of treats depending how desperate the government gets. A Creamsicle in every fist?

Below Dr. Steve reviews the issues that will dominate the campaign:

Space billionaires control the terrestrial landscape and now even space beyond. Our nation faces a critical shortage. American Jeff Bezos, Brit Richard Branson, probably Swede Elias Pettersson after contract negotiations are done, and Elon Musk. Musk has South African, American and Canadian citizenship. That gives us a total of one third of a space billionaire. One third of a billionaire won't even get you an underwater lair guarded by robot sharks. We have fallen behind in this critical area. The party that has a plan for creating homegrown space billionaires is the party that will occupy space on the government benches come fall.

Dr. Steve spends most of his time on Twitter and thus has his ear to the ground on the pressing issues of the day. Issue #1: Leave Britney alone!

Just as the election was about to be called NDP Leader Jagmeet Singh and Gurkiran Kaur Sidhu announced they are expecting their first child.

It suggests a possible unexpected turn in the campaign with other political leaders making desperate calls to in-vitro fertilization clinics, inquiring about express delivery services.

But for the NDP leader it once again raises the space billionaire issue. Elon Musk and Canadian pop star Grimes have led the way in modern baby-naming by calling their child X Æ A-12. If Canada is to retain its lead in this vital area Singh and Sidhu must take the initiative. Dr. Steve suggests they choose for their child the charming appellation “2018, c. 12, s. 186,” which is the official designation of the Greenhouse Gas Pollution Pricing Act. If you care about the future of this country and the global climate, having your child nicknamed “Eighty-Six” or “Gassy” is a small price to pay.

The Conservative party jumped out front in the political ad war with a charming piece featuring Justin Trudeau as Veruca Salt, the spoiled little rich girl from the 1971 movie Willy Wonka and the Chocolate Factory. In the original scene Veruca is demanding that her daddy buy her a golden goose. All things considered, not a bad idea — the young woman knows a good investment when she sees one. But the Conservatives evidently disagree. It could be they are counting on the general dislike Canadians feel for geese, mean and obnoxious creatures. Or they may simply be paying tribute to the 50th anniversary of that famous film and will soon release a video in which the head of Erin O'Toole offers tax cuts while singing “I'm the Candy Man.”

This summer he shaved. A clear rebuke to beardos everywhere, reinforcing the idea that the bearded man is not to be trusted. Trudeau has abandoned the furry community to Singh and the NDP. Good luck getting the pirate vote now, Justin. 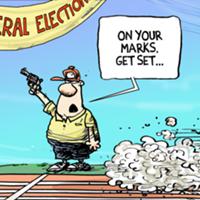 Trudeau Streaks for the Gold

Early in the election the issue most cited in news reports is the election itself. Tyee readers will remember this from the B.C. provincial vote in which exasperated voters were (according to reports) poised to vent their frustration over Premier Horgan's COVID election call on the party and the leader that called it. Nope. Such are the joys of punditry — such claims are always there atop the recycling bin, ready to be redeployed. If it is going to work out that way this time you would have to believe that people angry about the election will vote for some other party rather than just not show up at the polls. No, the election is not the issue that will decide the election. It's beards and geese. Dr. Steve is calling it.

As always, Dr. Steve will eventually disavow all knowledge of these predictions. This article will self-refute in five seconds.