You spin doctors are experts in political dirty tricks. Are you seeing many in this campaign?

Painful as it is to admit, Dr. Steve is not quite sure. It's possible that the early weeks of the campaign have seen very little skulduggery. Alternatively, there may have been a level of trickery afoot that would make Machiavelli look like a fairground rube trying to knock over lead bottles while the carny secretly steals his wallet and makes a date with his girlfriend. It all depends on who you believe.

Take the much-mocked Conservative pledge for a policy of anti-corruption or, as their Ontario campaign pamphlet put it, “ant-corrupton.” That Conservative party handout can barely be described without melting the circuits of your spellcheck. It promised an “acton plan” in “Otawa” involving “essental” products, and of course that epic “ant-corrupton” battle.

It is of course possible the pamphlet was written by poorly-educated grasshoppers. It is also possible that our nation's strategic sugar supply is indeed being given away under the table, down the table leg, and across the kitchen floor by a parade of corrupt insect profiteers. The Trudeau Liberals and their little red accomplices are biting into your Timbits.

Or something else may have been at work here. Journalist Amy MacPherson tweeted that screw-ups like this smack of an established Australian right-wing political strategy. The idea is to expand social media reach and exposure via intentionally dumb howlers and idiotic memes. The “ant-corrupton” pamphlet certainly earned tons of exposure for the Conservative brand. Erin O'Toole's photo got a lot more social media shares than a properly spelled pamphlet would ever have done. You might say it had legs. A few more mistakes like that and it's Otawa, here they come.

Then there was the Conservatives’ embarrassing “Veruca Salt” ad, mercifully withdrawn for copyright infringement. Another possible example of the “good memes go away, bad memes go everywhere” approach.

Idiocy or brilliance? Dr. Steve honestly does not know. When the choice is between “Some mad genius is playing 3D chess,” and “Somebody screwed up worse than an arc welder on the Hindenburg,” well, you'll understand if Dr. Steve usually leans toward the option with the highest degree of stupid.

Yet perhaps Dr. Steve is not providing proper credit. Something is working for O'Toole's Conservatives — they are up in the polls. This could be because for every human being on Earth there are an estimated one million ants. Only the Conservative party seems to be addressing this alarming fact. It could also be that O'Toole is appealing to voters who hope for a combination of tax cuts and subsidized poppers. Dr. Steve may be a professional prognosticator but when it comes to the Conservatives morphing into the People's Popper Party, he freely admits that his crystal ball failed him badly.

Meanwhile the Liberals too could be playing a deviously clever game-within-a-game. At early campaign stops Justin Trudeau was heckled by obnoxious anti-vaxxers. You can't buy that kind of helpful contrast, unless of course you can. Conspiracy theorists who are fond of talking about “false flags” and “crisis actors” will certainly tell you that the Liberals could easily hire gangs of wingnuts to follow the prime minister and make him look good. Mind you they will also tell you to dress up like a horse to get a deworming prescription, so take that into account.

At least one anti-Liberal stalwart does seem to have secret backing. There's a mystery guy who's been heckling Trudeau from coast to coast, one day in Hamilton, the next in B.C. 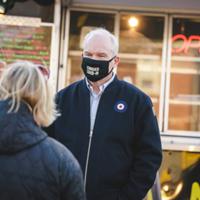 Asked by a CBC reporter if someone was paying his airfare the heckler said, “Maybe.”

But whom? The Conservatives would be the obvious suspects. Still, by this time you know that the obvious is merely a screen for the hidden truth. There has never been a murder mystery where the initial suspect turned out to be guilty.

So if the finger of blame for the hired heckler points at the Conservatives, that's the clearest evidence they must be innocent. A paid disturber who admits to a reporter that he is being paid? Obviously a Liberal plant. And yet the obviousness of that ploy means that it could not be the Liberals. They must be innocent. The NDP? They look guilty. Which means they too must be in the clear. That much is certain.

So who dunnit? The answer in a moment.

First though, these messages: “Friends! Has your horse dewormer left you squirming? Try Dr. Steve's ‘Howdy Neigh-bour’ Ivermectin. Dr. Steve's COVID Relief: Because you're no sheep! (Now in apple and hay flavours!)”