A key policy in the party platform, O’Toole insisted Monday, will be to require about 100 corporations under federal jurisdiction to have at least one voting board member to represent workers, starting in 2022.

Of course, regardless of how those members are chosen, having a single voice on a corporate board would not give working people “a real voice,” or any kind of voice at all. Indeed, it would most likely have the opposite effect in that it would give corporate directors an excuse to ignore what their workers have to say.

“You have a representative on the board,” I can hear a company spokesperson smugly telling unhappy employees, “and he agrees with us.”

If you’re a Canadian working person, when you hear O’Toole’s promise, you’re supposed to think of western European countries like Denmark, Germany, Norway and Sweden.

To see what’s likely to go awry with O’Toole’s proposal, though, we need only take a quick look at how legislatively mandated worker board representation actually works in the western European countries that have adopted it.

Naturally, there are differences in laws from place to place. There is no single European model for this policy.

But the most significant distinction among western European countries that have adopted this measure is that the size of board representation is consistently dramatically higher than the token gesture O’Toole is proposing.

That fully one-third of the board members should be representatives of the workers appears to be the norm. And in several countries, that’s a minimum.

Unlike the others mentioned so far, Austria applies its 33-per-cent rule only to private companies.

I wonder how O’Toole’s corporate backers would react to a proposal that one-third — or even one-fifth, as required by the incremental Finns — of their board members must come from among the working class?

I think we all understand how likely this is to be accepted by the Canadian corporate elite. They would threaten to decamp for Tennessee or Texas faster than you could say “right to work,” and a hypothetical O’Toole government would fold like a nylon tent.

Several other European countries, by the way, mandate 33-per-cent board representation only on publicly owned corporations — the Czech Republic, France, Hungary, Ireland, Luxembourg, Poland and Slovakia.

And it’s fair to ask how well this works in practice in Hungary, a virtual dictatorship under Stephen Harper’s favourite European leader Viktor Orbán. And whence would O’Toole’s lonely Canadian worker representatives be found? Surely not from among the elected leaders of the workers’ trade unions, as happens in Germany!

Tried in the U.S. at Chrysler Corp. in 1980, the presence of a single worker representative on the automaker’s board “did not translate into meaningful results for workers,” wrote political economist Susan R. Holmberg in the New York Times in 2019. Just the same, Chrysler eliminated the union seat on its board in 1991.

As practised in Germany where the concept is widely accepted, Holmberg observed, it “was never simply about wages and profits. It is about giving workers more power.”

How well do you think that will go over with the typical Canadian CEO?

O’Toole is not forthcoming with details, but we can take it as given that giving workers real power is not part of the Conservative plan.

And unions aren’t going to be given a role either — indeed, as noted above, the existence of the powerless and co-opted worker rep would be held up as an excuse to prevent working people from having unions, and to ignore them when they do anyway.

So — you can count on it — there will be no “union bosses,” as Conservatives love to call democratically elected union leaders, on O’Toole’s oh-so-slightly restructured boards.

Likewise, there is no suggestion or explanation of how these worker representatives could be held accountable by the workers they supposedly represent.

I’ll say. It isn’t worth the shimmering electrons used to transmit it to our screens.

“Mr. O’Toole’s record is one of attacking workers and weakening unions,” said CLC president Beatrice Bruske. “His opportunistic rhetoric and empty promises today do nothing to change that.”

She suggested the Conservative leader won’t provide details “because he knows full well his policy has no teeth and is a non-starter for these companies.”

If O’Toole is serious about this he can demonstrate his good will by actually answering four questions raised by the CLC:

Would worker representatives have the same rights and powers as other board directors? 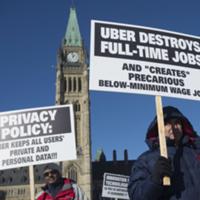 Who Sticks up for the Gig Worker?

Would they have access to the same financial and corporate information?

Can he name any CEOs of a federally regulated company he has spoken to who welcome worker scrutiny of topics like executive compensation?

What sanctions would he impose on companies that refuse to comply?

In the unlikely event O’Toole’s promise is kept, this policy would almost certainly be harmful. About the best a working person could hope for is that it would be meaningless.

So let’s get real, people. Whatever we think a Conservative government in Ottawa would do, it’s not going to be something that would improve the lives of Canadian workers.