Politicians from all parties like to talk about the importance of ensuring all voters are entitled to equal influence on the makeup of Parliament and the need for changes in our voting system to make this goal a reality.

But they have not taken action once they come to power under our current first-past-the-post system, which allows parties to win near absolute power despite winning the support of barely one-third of voters.

As we enter the last days of this election campaign, Fair Voting BC has completed our analysis of the federal parties’ positions on electoral reform.

Of the parties that are running candidates in a majority of ridings in B.C., only the Green party and the NDP have put forward positions and policy commitments that would be acceptable to democratic reform advocates.

Although there are some differences between the positions of these two parties, Fair Voting BC can comfortably endorse both of them.

In contrast, the other parties, the Liberals, Conservatives and People’s Party, are essentially missing in action on this file and have made no meaningful commitments.

Overall, Fair Voting BC considers the Greens to have the strongest position on voting reform of all the parties. On their website page entitled “Demand Democratic Reform,” they say that “Canada’s first-past-the-post electoral system must go,” and “demand proportional representation because Canadians want a fair electoral system.”

In their platform, the Greens call for a National Citizens’ Assembly to consider how to modernize our voting system, as well as several other proposed reforms such as lowering the voting age and mandatory and online voting.

In addition, they propose related reforms such as restoring the per-vote subsidy for parties and implementing “truth in advertising” rules for political advertising, as well as various initiatives related to integrity, ethics and transparency.

Our only small concern is that they do not explicitly state a commitment to implement any recommendation from the citizens’ assembly without a referendum. (We consider a referendum to be not only unnecessary, but ill-advised, as we believe that voters have a right to be represented in Parliament by an MP of their own choosing and that this right should not be denied to them based on a referendum.)

Unfortunately, the Green party is not running candidates in all ridings, so not all voters will have an opportunity to vote for a Green candidate.

The NDP also has a strong position on voting reform. Its platform says “A New Democrat government will bring in mixed-member proportional representation that works for Canada — and we will do it in our first mandate in government.”

“We’ll establish an independent citizen’s assembly to recommend the best way to put it in place for the next election to ensure both local representation and a federal government that reflects the voters’ choice of parties,” the NDP says. “Once Canadians have the opportunity to experience the new voting system and compare it to the old one, we will hold a referendum to confirm the choice.”

Mixed-member proportional representation, used in New Zealand, Germany, Scotland and other jurisdictions, allows voters to cast ballots for both local representatives and the party they believe has the best policies. The outcome is a Parliament that more closely reflects the popular vote.

In addition, the NDP proposes several other reforms, including lowering the voting age and banning cash-for-access fundraising events.

Our main concern with the NDP’s platform is that they have already decided they wish to implement a mixed-member model and want a National Citizens’ Assembly to focus more on how to put it in place rather than considering whether this model is the best choice for Canada in the first place. (Though NDP MP Daniel Blaikie did take the lead in introducing and passing a motion in the Standing Committee on Procedure and House Affairs calling for a study on establishing a National Citizens’ Assembly to investigate electoral reforms without specifying any limitations on what reforms would be considered.) 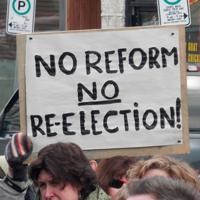 These Advocates Won’t Be Giving Up on Electoral Reform

We are also concerned that the NDP is willing to endorse a referendum following introduction of a reformed voting system, as we do not believe that voters’ right to representation should be able to be removed by a referendum.

None of the other three parties analyzed have anything meaningful to say about voting reform. They are essentially ignoring the issue in their platforms.

The Liberals, of course, famously promised that 2015 would be the last election run under the first-past-the-post voting system, only to renege on that promise. The only small point we can make in the Liberals’ favour is that their members on the procedure and house affairs committee did endorse Blaikie’s motion to study establishing a National Citizens’ Assembly, which we believe is critical to re-establishing public dialogue about voting reform. The Conservative members of the committee voted against supporting the proposed study of a National Citizens’ Assembly.

We hope voters find this analysis helpful as they consider how to cast their ballots and encourage them to fully research the positions of all candidates running in their own ridings.