The British Columbia government will make a small increase in this week’s budget to the amount of assistance for people with disabilities, but will leave regular welfare frozen where it’s been for a decade.

“We’ve always said that when the fiscal situation allows we will look to increasing the [disability] rates,” Social Development and Social Innovation Minister Michelle Stilwell said. “It’s a very good investment that for the second year in a row we’ve been able to increase the rates.”

The government announced Friday that starting on April 1, disability rates will rise by $50 a month, bringing the amount of money for an individual receives each month to $1,033. That works out to an extra $1.67 a day.

“All this raise was Christy Clark giving back money she took away last year with the bus pass clawback, minus a toonie,” said NDP social development critic Michelle Mungall. “At the end of the day what it means for people in their lives and their pockets... is they actually have the $50 of the $52 to pay for the new bus pass fee.”

The Tyee reported recently on a report by University of Victoria public policy professor Michael Prince that found the purchasing power of disability benefits had eroded by 2014 to the point where they were at least 33 per cent below what it would cost to buy the necessities of living.

As of December, about 117,800 clients depended on B.C. disability payments. Another 69,000 clients received temporary assistance — $610 a month for individuals — for people who are expected to work.

For people with disabilities, last year’s increase plus the one announced Friday brings the government’s spending to increase the rates to $390 million, Stilwell said. “We always recognize as well that there are other comprehensive supports in place to ensure that we’re caring for those who need it the most in our province.”

Supports like subsidized housing, free PharmaCare and no Medical Service Plan premiums also help, she said. “It’s not just about the rates.”

Asked about welfare for people expected to work being frozen since 2007, Stilwell said, “We believe that the best kind of support we can provide is a good-paying job and income assistance is a temporary support. My best thing I can do for individuals who are on income assistance is to ensure they get the training and the skills that they need to get a foothold in our growing economy.”

Trish Garner, a community organizer with the B.C. Poverty Reduction Coalition, said the increase to disability rates was “a step in the right direction” but that it was “very disappointing” that the increase wasn’t larger and that the government is leaving welfare rates frozen.

“It’s not going to make much difference to people with disabilities,” she said, adding that a person receiving the payments would still be able to afford less than they could have in the 1990s. “We would have liked to see a really significant increase tied to the [rising] cost of living.”

Different groups in the coalition are calling for increasing the rates to levels between $1,200 and $1,800 a month, she said. “This falls far short of any of those calls” and will keep people living in poverty, she said. “It shows a lack of understanding.” 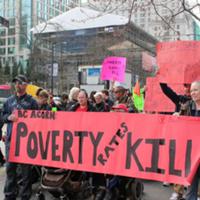 Garner said it is disappointing that the government has frozen regular welfare at a “deeply inadequate level.” Increasing welfare rates would help people who are transitioning back to employment, she said.

The NDP’s Mungall said the welfare rates have been frozen for too long. “It’s a huge issue. Every year I ask the minister how on Earth they come up with $375 as the shelter allowance for income assistance, because there’s nowhere in B.C. that’s available for $375.”

Average rents for a bachelor apartment range from a provincial low of $436 in Quesnel to over $1,000 in Vancouver, Mungall said. “We’re way out of step with reality here and when people are only getting $610 a month they’re not even able to afford rent in most places.”

B.C. needs a poverty reduction plan, she said, adding she plans to reintroduce for the sixth time a private member’s bill calling for one. “I’m hoping that Christy Clark will put her corporate interests and her partisan politics aside and support the bill because it’s what British Columbians need.”

The disability rate increase was among several spending announcements made in the days ahead of Tuesday’s release of the 2017-18 budget, which Clark has said will return money to taxpayers.