The NDP will be raising concerns with Elections British Columbia about how some ballots were treated during the recent provincial election in hopes of avoiding similar problems in future elections.

“In a super close election, it’s really disappointing that it appears so many ballots were mishandled,” said Glen Sanford, the NDP’s deputy director. “It is concerning it appears some eligible voters were disenfranchised. We don’t know how many.”

While there were issues in many constituencies, Sanford said, they were most evident in Richmond-Queensborough where BC Liberal Jas Johal beat the NDP’s Aman Singh by a slim 134 votes.

In some cases, absentee ballots were misdirected, sent to a constituency other than the one where they were supposed to be counted, he said. In others, voters were given incorrect information about who their candidates were, he said.

CKNW reported allegations that some Queensborough residents who voted at New Westminster polling stations were given ballots that listed the New Westminster candidates whereas they should instead have received blank absentee ballots.

On the first day of counting, the district electoral officer in Richmond-Queensborough allowed ballots with the wrong candidate name to be included but disallowed them on the second day of counting, according to Sanford.

“It seemed like they didn’t have clear guidelines and they changed the process mid stream,” he said. “That’s quite concerning.”

Keith Archer, the province’s Chief Electoral Officer, said the district electoral officer in Richmond-Queensborough did initially decide votes would count if the ballots named a candidate for the same party from a neighbouring constituency.

“That’s not consistent with our interpretation of the Election Act,” he said.

The official was advised overnight on the issue and changed the practice for the rest of the counting before going back and correcting any inconsistencies with the ballots counted on the first day, Archer said. In the end, those ballots were handled correctly, he said.

During the counting, Archer was in Courtenay-Comox, another close race, where he saw similar issues, especially with absentee ballots in which people had written down their preference.

“Some people record different names,” he said. They might name a party leader instead of the local candidate, or even a former party leader, he said. “Some people put all kinds of things down on a ballot.”

For the vote to count, it has to either name the candidate who is running in that constituency or include the party’s name, he said. The question is whether or not there can be confidence about the voter’s intent, he said.

Archer said he was unaware of instances in which voters were provided with the wrong names of candidates or with ballots that included the wrong names.

He also said he believes it’s rare for ballots to be returned to the wrong district electoral office. In Courtenay-Comox, out of 2,100 absentee ballots, just one had arrived at the wrong place, he said.

“No one’s brought any information to our attention about this being a situation they witnessed on a significant number of cases,” he said, adding he’d be surprised if there were more than a handful like that throughout the province. “That’s such an unlikely circumstance for us.”

Archer noted that parties have the right to request a judicial recount if they have concerns, but that none had exercised that right this election. “In the end, that’s a mark of the legitimacy of the election,” he said. 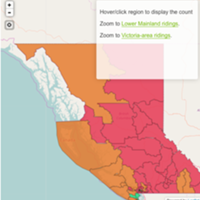 Sanford said the NDP considered pushing for a recount in Richmond-Queensborough, but decided that doing so would be expensive, was unlikely to change the result, and could take a while at a time when voters need less uncertainty. “We’ve got to move forward at this point,” he said.

He said the party would ask Elections BC to investigate what went wrong, how many ballots may have been affected, and what steps are being taken to make sure similar problems don’t recur. “A lot of disturbing questions remain,” he said.

Archer will provide a report on the election to the Legislature, a process that normally takes about a year to complete. “At this point, it’s very early days in our thinking about any recommendations for legislative change,” he said.

Before then in the next few months, he plans to submit a report that will include proposals for using technology to accelerate the counting. “We’ve been doing a lot of thinking here about ways we can modernize the process,” he said.