If the British Columbians get their way, the Green Party will help the NDP form government and changes to the electoral system will be decided through a referendum, according to two new polls.

The BC Liberals won 43 seats and the NDP 41 in the May 9 election, giving neither a majority in the 87-seat legislature. The three Green MLAs, led by leader Andrew Weaver, hold the balance of power.

Weaver told reporters Friday afternoon that Green Party representatives have been meeting with the New Democrats and the Liberals.

The Greens are on track to reveal by Wednesday if they will support either party in forming government, he said.

“We’re determined to show this parliament can work through co-operation,” he said. “We campaigned on ‘change you can count on,’ not just change.”

Just over half of respondents to an Insights West survey released Friday said they believed the Greens should support the NDP led by John Horgan, while 38 per cent wanted the Greens to help the BC Liberal Party and leader Christy Clark hold government.

Among Green voters, the preference for supporting the NDP was even more pronounced, with 62 per cent favouring a Green-NDP alliance. Less than 25 per cent of Green voters favoured backing the Liberals.

Insights also found that just over half of British Columbians are satisfied with the current first-past-the-post electoral system. Almost two-thirds said any change should be put to a referendum.

The Green Party’s election platform called for introducing proportional representation without a referendum. The NDP promised to introduce and campaign for a new electoral system but said any change must be approved in a referendum.

Horgan said earlier this week that the need for a referendum had been discussed with the Greens, but that his position has been firm. “I think if you’re going to change an electoral system, you should ask the people about that,” he said. “It’s their system, it’s not mine, and I feel strongly about that.” 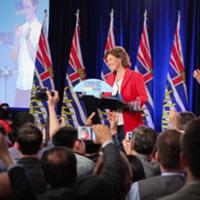 Another polling firm, Ipsos, found strong support for putting any change to a referendum among voters for all three parties.

While just over half of the respondents favoured changing to a proportional representation electoral system, 70 per cent of NDP, 76 per cent of Green, and 81 per cent of Liberal voters thought any change should be decided through a referendum.

Three-quarters of respondents also agreed that there should be “extensive public hearings” before the government makes any firm recommendations about changing how MLAs are elected.