[Editor's note: As part of a long-running occasional series on B.C.'s evolving creative spaces, Olivia Fellows reports on Vancouver's latest crop of innovative projects over the next several weeks.]

Covered in sawdust yet unscathed, I stand and observe the backyard of an East Vancouver home. With the help of two friends, Julien Thomas puts the last touches on the wooden tables and planters he'll later install in a converted parking space. 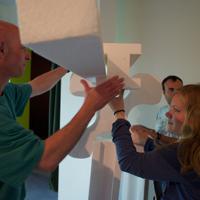 A Call to Play in Public Spaces

With nearly a year of planning, fundraising and community building under his belt, Thomas is another step closer to unveiling Commercial Drive's first parklet. A project normally pitched by resource-rich business and architecture firms, Thomas positions himself as a new breed of micro-park maker.

A parklet is a small public park that extends over the sidewalk and onto the street. They often include tables, chairs and bike parking -- places to stop, sit down and relax. So far Vancouver has four parklets built under a pilot program operated by VIVA Vancouver.

Over the program's short lifespan, Thomas's collaborative, do-it-yourself approach has proven both a blessing and a curse. While popular support became necessary to persuade officials and raise funds, the project's crowdsourced aspects have also added extra hurdles. With construction originally slated for Monday, July 21, the parklet installation is now delayed indefinitely.

From pavement to park

The Commercial Drive parklet will be Vancouver's fifth -- among the first constructed entirely through community cooperation. Funds, time and labour have been either donated or crowdsourced.

Thomas's idea first emerged when he was hanging out at his local coffee shop. He overheard a conversation Prado Café owner Sammy Piccolo shared with a customer about his interest in building an extra hangout space.

Piccolo agreed and the parklet project launched in August 2013. Thomas hired a local architect, and the two came up with a design to submit to the city's pilot program.

As the project grew, so did the costs. In addition to the money Piccolo invested, Thomas searched for enough sponsorship to cover his time and material. This came close to $10,000 worth of labour, wood, steel, fabrication and paint, plus over $5,000 they raised through a crowdfunding campaign. 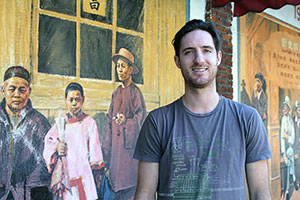 Investing nearly $10,000 in labour, wood, steel, fabrication and paint, Julien Thomas aims to build a space by and for his Commercial Drive community. Photo by Olivia Fellows.

Along with several artists and designers, Thomas also enlisted the help of students to make the neighbourhood park a reality. High schoolers at Britannia Secondary cut wood for the benches and tables, and students at BCIT helped with the ironwork.

"I see them in the same way I see myself… the kids that we work with at BCIT and Britannia, they're ones that are interested in woodwork and metal work," said Thomas. "As young people we all need to collaborate so we can get experience on projects."

The long, bumpy road ahead

Despite all the help he found, Thomas says the road to building the parklet is not without unforeseen bumps. "I don't regret it, but it's been really tough."

Thomas expected the Commercial Drive parklet to be on the ground in March of this year. But it took much longer for their final design to be approved by VIVA Vancouver. They had to negotiate every element: the tables; the paint; the artwork displayed on location.

"VIVA has got a really difficult job," Thomas explained. "They have to go and talk to streets engineering, bylaws, green streets program, traffic, transportation, so they have this other group of people that has to vet everything that goes on."

It's a process that's new for everyone involved.

"This is a pilot program and we need to make sure that lessons learned through this are reflected in future processes," said Scott Edwards, manager of streets activities for the City of Vancouver.

One lesson already learned is that time expectations vary among stakeholders. According to Edwards, the city cannot always keep up with the aggressive timelines put forth by the design and business communities.

This is especially true when multiple sectors are involved. "We try to be more inclusive [rather] than less with these projects," said Edwards. "But there's a fine line there because you know, the more people you include, more great ideas or differing opinions you may encounter."

Ten parklets are set to roll out by next spring. The first lot of parks will give Edwards and his team time to reflect back, work with applicants and report results back to the city. Edwards is optimistic that by the end of next year, the project will have outgrown its pilot stage.

A parklet champion in North America, the City and County of San Francisco has implemented a renowned park program and is currently home to 48 parklets.

According to Robin Abad Ocubillo, current parklet program manager for the city, local parklets have been overwhelmingly successful, backed by neighbourhoods themselves.

"One of the criteria for selecting proposals is understanding how much enthusiasm and support there is in that neighbourhood," said Ocubillo. The best applications come with letters of support from neighbours, residents, business operators, merchants and even elected officials.

The success stories surrounding the parklets in San Francisco demonstrate the significance and value they add to local communities. "It requires neighbourhoods to really come together and to communicate and to have dialogue about their public streets," said Ocubillo. 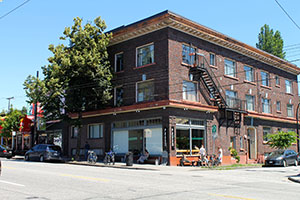 The Commercial Drive parklet will convert two parking spaces in front of Prado Café into publicly-accessible tables and chairs. Photo by Olivia Fellows.

The Commercial Drive parklet follows this trend. It was developed by and for the community and may serve as a source of inspiration for future parklets.

Thomas hopes spaces like the Commercial Drive parklet will help to debunk the myth that Vancouver is an unfriendly city. "I think it's time that we stop blaming the weather for how socially inept we are as a city," said Thomas. He says a greater variety of communal spaces will give people the chance to go outside, sit together, and interact with one another.

Despite construction delays, Thomas hopes Vancouver's residents will be able to enjoy the city's new parklet before the end of summer.