Vancouver may have stunning beaches and scenic trails, but the lack of public space in its downtown core has long been viewed as a public design problem in need of a solution. 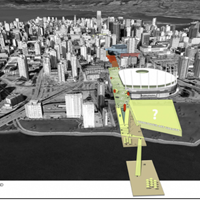 "Compared to other places, Vancouver does not have a big street culture," says Jessika Kliewer, a UBC design student involved in Upcycled Urbanism, a project that aims to increase public involvement in the creation of public spaces and the streetscape.

It invites people from any and all backgrounds to re-imagine Vancouver's public space using blocks made from recycled EPS (polystyrene).

The project is a partnership between the Museum of Vancouver and three design teams, which are open to the public but led by people from UBC's School of Architecture and Landscape Architecture (SALA), the Vancouver Public Space Network, Maker Faire Vancouver, and Spacing Magazine.

The teams will take to the streets on Saturday, July 13, transforming the 700 block of Granville Street between Georgia and Robson in downtown Vancouver.

According to Jonathan Bleackley, a volunteer for the Vancouver Public Space Network and one of the team leaders, two workshops preparing for the event both sold out.

During the last workshop, held on May 25 at the Museum of Vancouver, participants were asked to choose a team following presentations from the three leaders. After introductions and some initial brainstorming, boxes full of miniature scale building blocks -- like LEGO pieces -- were brought out. Participants were allowed to play with the pieces and create a design based on the team's pitch. The workshop also provided a limited amount of real-sized building blocks so participants could try out some of their designs.

The teams include people from all types of professional backgrounds; designers, architects and artists, accountants and students.

"It was exciting to see people that were not involved in design. The event is oriented towards people in Vancouver, not just designers, architects and planners," said Kliewer, who is one of the team leaders.

According to Charles Montgomery, curatorial associate at the Museum of Vancouver, Upcycled Urbanism is being funded through grants of about $8,000 from the Vancouver Foundation and UBC's School of Architecture and Landscape Architecture. The blocks of EPS are being donated by Mansonville Plastics.

"Everyone is welcome to help build and play with this new environment," said Montgomery.

The three teams are:

Bleackley's team's goal is to connect people, so he started workshops by asking participants: "how do you connect with people?" and "think about the places you love." Although two meetings remain to discuss how to incorporate food and sounds in the design, he said the group's final design is "pretty much done." They want to keep it flexible to encourage people to modify it on building day.

According to UBC student Minnie Chan, her team's main idea is to create a head, body and legs; three sets of design that can later be integrated. Chan's team wants to separate its time on building day into three different sections for each part of the body. They also intend on having extra pieces people can play with.

Jessika Kliewer and her team want to create a space based on the zoning the city is allowing its citizens to inhabit. The name is a pun for the strict construction laws in the city. "We're working with the environment boundaries, but creating a place where people can interact and play games with the designs," said Kliewer. The idea is still at the brainstorming stage, but the team plans to play off the events going around the area designated for the build, possibly creating a place with mazes or obstacle courses.

Although the main purpose is to create spaces were people can interact, according to some of the designers involved in the project, Upcycled Urbanism is also about pushing the boundaries and playing with -- or around -- the numerous restrictions the city places on construction and design.

"Upcycled Urbanism challenges the way we perceive the streetscape and the space around the city. Vancouver is known to be very bordered and somewhat restrictive in many ways," said Chan.

Even while working with the support of the city, the teams have been asked to abide by certain rules that the designers were all too happy to play by.

Few of the final designs are really final, as most of the teams agreed on allowing passers by to get involved.

"It's not supposed to be a pristine object, it's an environment and people should be able to interact and change it," said Kliewer.

Some of those involved have asked that the blocks, which are intended to be shipped off to be recycled after the building day, stay in the streets for a longer period. Bleackley wants to keep the structures around for a week or two; they could be used to build other things, he argues, and some people have expressed interest in using them for their block parties.

Chan agreed. "I definitely think we should keep the pieces out longer. After devoting so much time and effort into producing this for the public and then having it only be out for one day, it might not be ideal."

Regardless of when the pieces are re-recycled, the main objective is to get people out to enjoy the streets of Vancouver.

"I hope that when the event occurs, that people will be encouraged to come and get involved," said Kliewer.