What do Dan Mangan, Charlotte Gill and J. J. Abrams have in common? Hint: it's not their hometowns, birthdays, net worth or award collections. 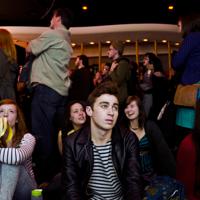 Give up? All three are currently shaping the future of British Columbia's ever-changing creative industries. According to a new report commissioned by professional associations across film, television, music and publishing, the provincial government needs to address B.C.'s indie heartthrobs, memoirists and Hollywood North bigwigs as a collective, rhizomatic whole. And if it doesn't, B.C. will see a drain of our most creative brains.

"There's a lot of crossover talent," explains Susan Brinton, lead author of the study From the Margins to the Mainstream: Moving B.C.'s Creative Industries Forward. "Musicians are making the scores for film and television, film producers are working on music videos, and writers are writing all the scripts."

At a press conference today, Liz Shorten from the B.C. Producers' branch of the Canadian Media Production Association said homegrown innovators in her sector are already heading to Ontario, Quebec and other international destinations. "These are business people making business decisions, and they're going to go where the incentives are," she said. "If we're not competitive, the work will go somewhere else."

That theme was echoed at the news conference by executive directors of the three other groups who commissioned the report, Sylvia Skene of The Magazine Association of B.C., Margaret Reynolds of the Association of Book Publishers of B.C., and Bob D'Eith of Music B.C.

B.C.'s "creative cluster" generates about $4 billion a year; $1 billion comes from movies and TV alone. "Certainly in the film and television industry, there's a very pronounced shift," Brinton observes. "Compared with other provinces, [local] production has dropped considerably over the last several years."

Cultural hotspots like Toronto and Montreal have been able to foster creative growth more effectively, a process Brinton would like to see mirrored in B.C. "We're losing talent to other jurisdictions because of more competitive funding, tax credit regimes and more employment opportunities," she says. "That's a serious concern for all the creative industries."

To stay competitive, the report recommends enlisting a new umbrella organization to oversee funding, tax breaks and job retention across all creative fields. "There's not an integrated industry-wide organization that oversees funding to these different sectors," says Brinton.

Margaret Reynolds, executive director of the Association of Book Publishers of B.C., introduced the idea of a "provincial secretariat," modeled after the Ontario Media Development Corporation. "It is a simple model that has worked in other jurisdictions around the world," she said of the report findings, which propose a three-year plan. "We trust it will take advantage of the opportunities available right here in British Columbia."

One of the province's rising opportunities is its technology sector, which produces bestselling video games and graphics and employs 22,000 people. "It's great when technology industries like visual effects and animation get funding, but that's not looking at the whole," says Brinton. "If you don't have content and creative producers to work within the technology, that's not going to go forward."

Shorten says creative industries are expected to expand globally to a $1.5-trillion economy by 2015. As creatives working on books, film, fine art and performance converge and collaborate in digital platforms, Brinton maintains a more cohesive strategy is needed. "If you're not funding creativity and innovation, then you're not moving into the creative economy, where a lot of dynamic growth is expected to continue to come from," she says.

Another piece of the process is allowing creative content makers to keep their intellectual property rights, rather than signing ownership over to international labels and distributors. "We want to have our own creators and writers grow, so they can employ British Columbians," says Brinton. According to the study's author, that means more long-term jobs, and less money "drifting off" to international distributors.

The report marks the first time business associations across media have come together to speak as an economy in transition.

"We're starting a conversation," said Reynolds. "In this period of rapid technological change, producers of creative content have to keep current, or risk falling behind."