The B.C. government has finally given its blessing to a massive hydroelectric dam proposal six decades in the making.

BC Hydro is now permitted to begin building the Site C project, now pegged at $8.7 billion. The dam aims to provide enough power for 450,000 homes. The province has said the project is needed to help power the liquefied natural gas industry.

At stake in the 1,100-megawatt project -- which has been on the books in various forms since the 1950s until it was shelved 30 years ago by the B.C. Utilities Commission -- is 10,000 hectares of the fertile Peace Valley region, more than 40 per cent of it classified as farmland.

In 2007, The Tyee reported then-premier Gordon Campbell's speech to municipal leaders, in which he vowed to support the BC Hydro proposal.

Nearly three years later, The Tyee published a five-part series about the renewed push for Site C by reporter Max Fawcett. Since then, we've covered the twists and turns as the project flowed through the public debate towards today's decision.

Here is a sampling from The Tyee's coverage of Site C over the last seven years.

As Site C dam gets environmental approval, a local journalist's case against

Ahead of Site C Decision, A Plea from Peace River Valley Residents

Oct. 3, 2014: Ahead of the province's decision on whether to give the environmental green light to Site C, a coalition of Peace River Valley residents, environmental advocates and First Nations leaders released the above video plea to stop the dam from flooding nearly 10,000 hectares of their valley -- 40 per cent of which is classified as farmland.

Sept. 10, 2014: With succulent cantaloupes and honey pots laid out in front of them like Da Vinci's Last Supper, northeastern B.C. municipal and First Nations leaders renewed their opposition to the proposed dam, wrote reporter David Ball.

May 8, 2014: The panel reviewing Site C concluded the project would provide cheap power that will be needed eventually. But as legislative bureau chief Andrew MacLeod reported, that power likely won't be needed as soon as BC Hydro thinks. MacLeod sifted through the panel's 50 recommendations should the project receive approval.

Dams Not Eternal in 'DamNation'

May 3, 2014: Tyee contributing editor Chris Wood interviewed the U.S. director of a documentary film described as "a powerful effort to jolt North Americans out of their complaisant acceptance of big dams as simply part of the landscape."

2013: Dam's future, and finances, under scrutiny

Sept. 2, 2013: Tyee columnist Rafe Mair lambasted the government's running of BC Hydro, or as he put it, a "decade of incredibly stupid policy," including ex-premier Gordon Campbell's Clean Energy Act which exempted Site C from full review.

June 13, 2013: Tyee reporter Colleen Kimmett looked at a deal to sweeten the Site C deal -- a payment of more than $168 million over 70 years from BC Hydro to the Peace River Regional District to compensate for damage.

June 6, 2013: With the provincial cabinet proclaiming Site C an essential energy source for B.C.'s hoped-for liquefied natural gas boom, reporter Hayley Dunning launched a two-part investigation of fracking in northern B.C. -- including links between LNG dreams and the hydroelectric megaproject that could provide its power. 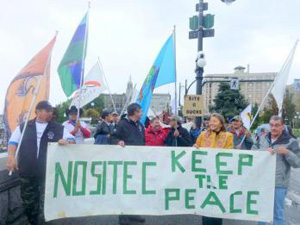 Sept. 22, 2011: Despite a year-long, $8-million public consultation process on the Site C dam, a team of five advanced investigative journalism students at the University of Victoria examined claims that BC Hydro appeared to have never outright asked Peace River region residents whether the project should go ahead.

Aug. 31, 2011: Amid rising conflict with First Nations in the province, BC Hydro quietly dropped part of its commitment to a global standard of reporting "violations involving rights of indigenous peoples," according to University of Victoria advanced investigative journalism students.

Why Is Canada Freezing out Geothermal Power?

Nov. 19, 2010: Tyee writer Mitchell Anderson asked why Canada had become a world leader at generating geothermal power -- just about everywhere except in our own country. Meanwhile, B.C.'s push for Site C dam ploughed ahead despite potentially producing six times less electricity than renewables, at a higher cost.

BC Hydro Spent $62,000 on Party for Politicians

Nov. 15, 2010: The Crown corporation behind the Site C megaproject was confident a series of lavish receptions for lawmakers was good value for money, according to freedom of information request documents obtained by Andrew MacLeod.

Economist Calculates BC Hydro on Path to Ruin

July 20, 2010: Amid a renewed push to build the Site C dam, top BC Liberal Party political strategists and supporters took over key positions at BC Hydro. As Tyee columnist Bill Tieleman argued, the results at the province's largest Crown corporation became clear.

May 6, 2010: Reporter Jesse Ferreras put the province's tabled Clean Energy Act under the microscope, along with its ambition to achieve B.C.'s "electricity self-sufficiency." Could that be achieved with its clause allowing bypassed reviews of megaprojects such as the Site C dam?

April 21, 2010: After Gordon Campbell announced the province was taking the next steps towards Site C, reporter Jesse Ferreras went to Pemberton where concerns arose over the impact of power transmission lines from the dam.

April 5-9, 2010: Writer Max Fawcett -- former newspaper editor at the Chetwynd Echo in the Peace River area slated to be flooded if the Site C Dam project is approved -- interviewed project opponents, sifts the government's claims, and lays out a dam-free alternative for the region. He shared his findings in a five-part Tyee series.