The next time you hear the Campbell government call something "green," know that means the colour of U.S. currency, rather than meaning environmentally friendly. With the introduction of Bill 17 (2010), the Clean Energy Act, (a more appropriate name would be the Flood Valleys for Power for Export Act) the Campbell government finally came clean with its plans. 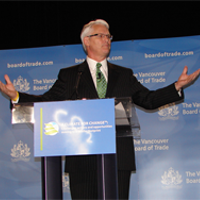 For decades British Columbia rejected the development of power for export. The province participates in, and makes a lot of money, from the electrical market, but it does that by importing when power is cheap and exporting when it is expensive. The storage capacity of B.C.'s dams makes that electrical trade possible. Until the Campbell government encouraged the run-of-river projects, generating capacity was not developed in excess of BC Hydro's projected provincial demand.

Gutting the BC Utilities Commission's authority

Last summer the British Columbia Utilities Commission rejected BC Hydro's 2008 long term acquisition plan (LTAP). Its July 27, 2009, decision rejected or found deficient a number of material parts of B.C. Hydro's plan. On April 27, 2010, the Campbell government put BCUC in its place by stripping the regulatory authority of any powers with respect to 11 projects, including Site C. In addition to putting specific projects beyond the authority of the commission, the act states that one of British Columbia's energy objectives is: "to ensure the commission, under the Utilities Commission Act, continues to regulate the authority with respect to domestic rates but not with respect to expenditures for export, except as provided by this Act."

No longer will BCUC be able to reject a proposed power project on the grounds that the power is for export and not needed in B.C.

B.C.'s rivers are being destroyed and valley's flooded so Californians can crank up their air conditioners.

Ironically, the Bill also reverses the separation of BC Hydro and the British Columbia Transmission Corporation. It is amusing to go back to Hansard for 2003 and read the government's speeches in which they proclaimed why breaking up Hydro was vital to B.C.'s economic interests. Reversing that decision is not because the government has changed its mind with respect to helping its independent power producing (IPP) friends; it's just that having Hydro act as an agent for the IPPs allows them to make even more money while the public bears the risk.

Like the HST, the announcement of a shift in the development of power for export, is something an election should have been fought on. British Columbians did not give the Campbell government a mandate to change Hydro's reason for being.