“When I entered politics, I took the only downward turn you could take from journalism.” — Jim Hightower, ex-Texas politician and journalist.

Forget about All The President’s Men, the great Watergate scandal book and movie, and think about All the Premier’s Men and Women.

Because in British Columbia, an awful lot of good journalists have become Liberal candidates or staff for Premier Christy Clark — and there’s lots to be anxious about.

This month former Global TV news anchor Steve Darling and ex-reporter Jas Johal were announced as candidates for the BC Liberals in next May’s election.

They are only the latest journalists to hear the siren call of B.C. politics — or of jobs in the BC Liberal government’s massive communications wing — in recent years.

And at a time when journalism is at a very low ebb, that should trouble voters.

So should the fact that corporations which control much of B.C.’s television, newspaper and radio media are also major donors to the BC Liberal Party.

It leaves journalism open to the withering attacks launched by U.S. Republican President-elect Donald Trump, who savaged the mainstream media for — in his view — backing Democrat opponent Hillary Clinton.

“The election is being rigged by corrupt media pushing completely false allegations and outright lies in an effort to elect her president,” Trump said in October.

Trump’s charges weren’t seen as bluster by the public — a Quinnipiac University Poll found that 55 per cent of voters said Trump was right in alleging media bias, while 42 per cent disagreed.

I know Johal, and while I politically regret his decision, he is an honourable person with a distinguished journalistic career. Darling is also well respected.

But — and I say this as an open, if critical, NDP supporter — having journalists who reported the news for years and then become partisan politicians can be disturbing.

They have every right to get into politics, but there is a worrying element as they go from the balanced reporting that built their credibility to reciting party spin lines that strain belief.

And of course, being former reporters who were seen as even-handed and fair helps them sell dubious political positions in their new role as candidates.

“When you decide to do something, some people are happy and some people are not,” Darling said. “I can’t control what people say or what people do. But I have integrity and Jas does as well and I think that me as a politician is going to be someone who is built on morals and ethics — that’s what I do, that’s what I’ve done my whole career. I don’t change.”

And Johal responded to a tough question with a straightforward answer from Steele.

“If anyone thinking the Global newsroom is biased, there’s a whole bunch of Liberals in there, Jas, what do you say to that?” the host asked.

“Well I would say that in 20 years of reporting I would dare anyone to say I was leaning one way or another,” Johal responded. “In looking at the last campaign, I would think I was quite aggressive in challenging some of the statements the Liberals had made in regard to LNG and some of the other topics that we had gone through, very aggressive in the coverage; but at the same time very aggressive with the NDP as well.”

But the question isn’t whether Darling or Johal were biased toward the BC Liberals. It’s how much their years of hard-earned fairness will help their new party sell some dubious claims — even about issues the two journalists may have ripped them on in the past.

Also completely legal but troubling is newspaper, radio and TV companies giving substantial political donations to the BC Liberal Party.

Shaw Communications owns enough shares of Corus Entertainment, which owns Global TV and CKNW AM 980 radio, for the Shaw family to control the company.

The Postmedia Network — which publishes the Vancouver Sun and Province, 24 Hours Vancouver and newspapers across Canada — gave $10,000 to the BC Liberals in 2013.

Glacier Media — publishers of the Victoria Times Colonist, community newspapers across the province and business publications — donated $100,000 to the BC Liberals in 2009.

Even the Alberta Newspaper Group, with no publications in B.C. but an office in Vancouver, gave the BC Liberals $28,750 in 2014.

That company was founded by David Radler, the former newspaper mogul and long-time business partner of Conrad Black who went to jail in the U.S. on mail fraud charges and testified against Black, leading to his own prison term. Radler was named acting publisher of the Victoria Times-Colonist newspaper in 2013.

Media companies have every right to make donations under Elections BC rules, but the political contributions give the appearance of bias and negatively affect perceptions of their news coverage — unfairly in most cases. But not contributing to any political parties would be far smarter and more defensible to readers, viewers and listeners.

Then there are the many former journalists now working at high-level communications jobs in the BC Liberal government. 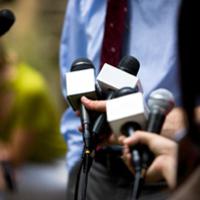 When Journos Go to Work for the Government

Former BC CTV news anchor Pamela Martin went first to Clark’s office as director of engagement and then to the same role in the BC Liberal Party.

Ex-CKNW Bill Good Show producer Rebecca Scott — married to Stephen Smart — went to the premier’s office as deputy press secretary, then to another government communications position in the tourism ministry before taking a job with a government relations and lobbying company.

As The Tyee detailed in 2012, there are more than 200 communications staff in the government’s Communication and Public Engagement office — and many of them are ex-journalists who saw there was more money to be made there than in shrinking, cost-cutting journalism.

From ex-Canadian Press reporter Scott Sutherland to CKNW’s Graham Currie to Jeff Rudd, formerly with the Times-Colonist, to Brennan Clarke of Black Press — a lot of reporters have gone to work for government.

The trend is strong and growing as newspapers, radio and TV media jobs disappear. When the BC NDP was in power other journalists moved into government as well, though not in as large numbers.

And of course Clark herself was a CKNW talk show host for several years before returning to politics.

None of this breaks any laws, rules or journalistic ethics. But at a time when the media is under fire, the public should be concerned that today’s balanced reporter chasing down the news could become tomorrow’s MLA or spin doctor doing all they can to twist it.