[Editor’s note: Jay Pitter travelled Canada for her forthcoming book 'Where We Live,' to be published by McClelland & Stewart, a journey that put her in touch with inspiring advocates addressing the nation’s housing crisis. In a project for The Tyee funded by the Catherine Donnelly Foundation, she shares some of her conversations, including this one today.]

I’m not certain of when I first met Mirlo Liendo because she has always felt familiar. We both grew up in Scarborough, an inner-suburb on the outskirts of Toronto’s downtown core. As little girls, we befriended a pair of pretty awesome sisters — I was Angie’s friend and she was Julie’s friend. We attended the same junior high school, but I’m a few years older so we never actually hung out on the baseball diamond where the cool kids congregated at recess.

However, our connection isn’t simply predicated on these coincidences of place and childhood friendships. Like me, Mirlo knows what it’s like to be a poor kid navigating housing vulnerability.

Growing up in Toronto — dubbed the child poverty capital of the country — the odds were stacked against us. A recent report undertaken by the Ontario Association of Children’s Aid Societies shows that 26.3 per cent of children in the city live in poverty, those from racialized families are twice as likely to be poor, and shamefully, 84 per cent of Indigenous children experience poverty in my home city.

Given that shelter is the largest household expenditure, the correlation between poverty and housing vulnerability is obvious. What’s complicated is that the same institution that generated the findings revealing our nation’s child poverty rates, identifying increased risks faced by racialized children, is itself accused of compounding the problem. The children’s aid societies have been accused of racial bias and competency gaps, which has in part resulted in displacing both Black and Indigenous children from their homes into care.

Often when people urge us to see what is at stake for our future, they speak of what we owe children. Yet children themselves are almost always silenced in urgent conversations about, for example, the future of housing. Throughout my book research process, it was important for me to spend time and chat with children.

Also, I found that a lot of adults exploring issues of housing vulnerability often harken back to their childhood experiences. My own experiences inform my broader questions of home and belonging. This was also true of my conversation with Mirlo, who is today a youth mental health counsellor and emerging writer. She spoke about her experience of housing vulnerability as a child and how that affected housing choices she made for herself and her children.

Here is a bit of our conversation.

Jay Pitter: So, you moved around a lot as a kid...

Mirlo Liendo: Yes, I moved 11 times before I was nine years old to be exact, and if you do the math you’ll see that also meant I had frequently moved schools as well. My mom did the best she could without my father’s support — he left us when I was two years old. She had a high school education and worked up to three secretarial and waitressing jobs at a time. We were always moving or in between apartments. I didn’t fit in anywhere or have any real friendships — I was always the "new kid."

Moving in general, and especially as a kid, is such a significant milestone. I can’t imagine what it must have been like for you to have to move so many times. What are your most vivid or important memories related to moving around so much?

I spent a summer (plus a lot of weekends) with my great grandmother. Her apartment backed into the Humber River. I have a ton of memories staying with her because there were no kids to play with, no T.V., and all she had for me to read were endless subscriptions of National Geographic magazines. Her bathroom smelled like Nivea cream and rouge.

We also stayed with other family members. I remember sleeping on a couch or a mattress on the floor. I went to some school for a little over a month I think. To be honest, I remember very little about some of the other places we lived. I do know I moved schools yearly, sometimes twice a year. I never had any friends, and I don’t remember teachers’ names until Grade 4. When I think of this time so many things come up for me. Some of the details of my younger years are unclear while some other details are very clear.

That makes perfect sense. All of those moves and burdens that came along with them are far too much for a little girl to carry. Not remembering all of the details is likely your brain — inner-wisdom — protecting you. What are some of those details that are very clear?

My first memory is living in a basement apartment with my mom when I was in kindergarten. She would put me on the bus alone in the morning and I’d sit in the front where the driver could see me and I’d get off in front of my school which doesn’t exist anymore. One time I fell asleep and missed my stop though. What a nightmare!

My mom was always at work and another time, around third grade, I lost my key. My mom worked at Obey’s at Yorkdale and I didn’t know what to do so I sat on the stairs and cried. A man who lived upstairs took me in. He was really nice, he bought me pizza and looked in the yellow pages for my mom’s work number and called her. We just hung out until she got home, but looking back I realize how scary that must have been for her.

I’m thinking about how scary that must have been for you. You were obviously a really resilient kid. I think that kids like us growing up pretty independently, having to sort things out within our homes and neighbourhoods often develop a certain kind of resilience, and I’d go as far as saying our interests and values. What are your thoughts on this?

Definitely. I became a mom pretty young but finished college and started working in group homes for teenaged girls involved in the youth justice and child welfare systems. I spent 17 years in total — many of those years as a manager — doing that work. Although their stories were diverse and different from mine, I got their need for a stable place — for something that felt like home.

Thank you for your work. I lead a lot of challenging city-building projects and the one issue that remains very sensitive for me is young people without safe and nurturing home situations. So, again, thank you. Did your early experiences of childhood housing vulnerability impact your personal life choices as well?

Yes, but not in positive ways. I met my ex-husband when I was 19 years old when we were in high school. He came from a nice neighbourhood where he lived in a big house with two parents — although one of his parents had recently passed on when we met. All of his uncles had nice homes, cars, friends. His brothers were all aspiring to something; his dad owned his own business. So naturally, I thought this meant they were good people. When we met, I was in my fourth apartment since having my son who was two years old. Shortly afterwards, we had a son together; all I wanted was a nice place for us to live together. By this time, we were both in college and working shift work.

Things were getting increasingly more difficult between us, but his dad needed help paying the mortgage on a house he had bought years earlier. He offered us the kind of house I’d always dreamed of living in — like the ones my friends’ parents had. When we moved in my ex’s father promised to sign it over to us as soon as possible, which never happened.

I continued to work while raising children and my husband worked in the shelter system and went to university to complete his degree. Over time things at home became increasingly more abusive and having poured all of my money and credit into the house, I was forced to leave bankrupt without a plan.

I entirely understand what having a house represented to you and I’m so sorry this happened. After leaving, what was your search like? 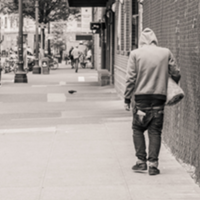 With four kids, I found myself being turned down just because of biases against single mothers with multiple children. When searching for three-bedroom homes, I’d be questioned about where everyone was going to sleep. Also, affordability and my credit were an issue. Plus, so many of the places I saw had mice, mold, cockroaches, broken doors, locks that weren’t functioning, missing doors and more.

I often say that housing vulnerability is an issue that impacts women and children in such a distinct way. Your story exemplifies that, but it also exemplifies the incredible power of women. What’s your housing and employment situation today?

Today we are happily renting a beautiful home in Scarborough, which is shared with a friend and her son, who live in a completely separate unit. Sharing a home — which was the only affordable option for me — with a close friend gives me the security I need.

Still, I don’t think I have a traditional sense of home and my experiences have taught me that I don’t have any roots where I’m living. At the same time, I love the idea of a home structure and that my children are so safe and comfortable.

I may never settle fully into a traditional idea of home, and if this is the case I’m OK with that.