[Editor’s note: Jay Pitter travelled Canada for her forthcoming book 'Where We Live,' to be published by McClelland and Stewart, a journey that put her in touch with inspiring advocates addressing the nation’s housing crisis. In a project for The Tyee funded by the Catherine Donnelly Foundation, she shares some of her conversations, including this one today. We are publishing a version of this in French as well.]

In planning to write my book about housing injustice across Canada, initially I didn’t put Montreal high on my list of must visits. After all, the city long has been known for its affordable and beautiful housing. However, meeting Will Prosper changed my perceptions.

As one who exclusively speaks English, I must humbly acknowledge that I did not anticipate the complex dimensions of housing vulnerability created by the confluence of place and language. Will, a Montrealer, complicates the notion of Canada’s frequently discussed two solitudes — anglophones and francophones — adding the dimensions of both race and place. "We are Black and French speaking in Quebec,” he says, “so we fall into a forgotten third solitude."

I feel complicit, and uncharacteristically clumsy, because he doesn’t just mean that in Canada he and other Black francophones are forgotten by white English speakers, he means by all of us, even people who look like him.

Nonetheless, he graciously invites me to where he grew up, Montreal North — a resilient and vibrant community with lower income levels and higher crime rates than Montreal overall. A large part of our housing vulnerability conversation is focused on public spaces and neighbourhood hubs. We chat endlessly about multiple spaces and the stories that shaped Will’s housing experiences.

One neighbourhood hub, of course, is the public school. Will Prosper thrived within and outside of school. He served as an RCMP officer, then became a civil rights activist against police brutality and economic oppression, a recognized filmmaker and founder of the Hoodstock social forum aimed at creating safe, inclusive urban spaces. He continues to live and work in Montreal North.

Will attained his successes, however, not because school provided him a childhood refuge. The part of our conversation I share here delves deeply into the role that schools play in shaping the sense of home. It begins as Will, now in his forties, stands in front of his former secondary school, remembering the first day he attended.

WILL: On the first day of high school a person pointed a knife against me because I was walking with a Walkman CD player and he wanted it. I didn’t know this while I was being violently threatened, but my father was doing the income taxes for his father. Our stories and our homes were closely linked but we didn't know about each other. Anyways, a friend we both knew stepped in and the situation didn’t go any further. Later, he ended up being one of the biggest drug dealers in the neighbourhood and got deported. Maybe if we’d known that we were connected, he would have done other things, had a different story.

JAY: What a first day of school. It’s interesting that you started your story about housing at a site other than your home. From a placemaking perspective, this makes perfect sense of course. Our home extends to sites beyond where we are housed. And, as I was waking around the community these past few days I was wondering: Where does Will fit into all of this? When I say Montreal North what are the places you see in your mind, what sites hold significance for you?

WILL: It’s hard for me to find just one place in Montreal North that is significant to me. It’s not a place I live in; it’s a place that lives in me...

The beauty, and my understanding of his words, make me want to weep.

WILL: ... so every street, every building has meaning for me. These places hold my stories — experiences with friends and girlfriends.

JAY: Yes, I understand. Is there a reason we started our walk in your neighbourhood where we did?

WILL: Yes, we started in front of my building, which is in a very poor neighbourhood you know. It’s where I come from, where I grew up sharing a room with my three brothers. And it’s in front of my high school, and that’s very significant because of what I went through there.

JAY: Can you talk about that more — your high school and what you went through?

Having grown up in a social housing community also I get the significance of the basketball court and Will is a Black male over six feet tall so I nod knowingly with a sense of where he’s going.

WILL: I was good at basketball and I was also good at school but the school didn’t want to recognize me for academics, the system doesn’t want to recognize the potential and greatness of kids in our Black communities. Fortunately, I had a teacher who intervened for me so I was able to realize my academic potential.

JAY: Same here. I had a teacher who also intervened for me very early. I was fortunate but still disturbed by the inequity. I remember being little and that kids from my community were only given affirmation during track-and-field season — not during the Science Festival or at other times. Although I wasn't treated in that manner I definitely knew that there was something about race and something about the neighbourhood where we lived, contributing to the way most kids who looked [like] me were treated.

WILL: Yes, it’s like kids like us can’t have many gifts and forms of potential. When kids from certain neighbourhoods are only valued for athleticism, you end up leaving out so many others, you end up killing their dreams.

JAY: Absolutely, most people who’ve never lived in low-income neighbourhoods perceive schools as being safe places — places where young people receive education and affirmation that prepares them to thrive in the larger society. This is sometimes the case, but for kids growing up in low-income communities, schools can be both emotionally and intellectually unsafe places within their neighbourhoods.

WILL: Unsafe and dangerous. A violent place. For young men, there is a pressure to become involved in aggression or violence to avoid being on the receiving end of it. And you cannot overtly be a good student because that isn’t the expectation of teachers and peers. This is why some young boys find themselves doing stuff they don’t want to do or being arrested for wrongdoings. The school system isn’t a safe haven at all. For me a growing up in high school it was a very violent place to be.

For example, in Grade 8 I'd won the school-wide spelling bee contest and then I went all over Quebec and I was in the semifinal. So, I could throw some big words around and the worst thing is that I ended up failing my French course in Grade 12. What we're talking about here is the violence that existed in my peer groups and larger community. On top of that there's the systemic violence within the school itself.

I don't think people recognize this form of violence. It is a form of violence where you always feel hypervigilant and have to be different people within your school, neighbourhood and home. You never feel safe to be the person that you are because of these conflicting expectations placed on you.

JAY: As a female I likely have different experiences of feeling unsafe. However, I entirely relate to what you’re saying about being different people. At school my teacher-mentor encouraged me to be creative and curious and, on the playground, I had to take on a tougher persona to ward off race and neighbourhood-related shaming so I became the slightly mean popular kid.

In my first-generation immigrant home, it was all about achieving high marks. My mother’s mantra was actually Darwin’s survival of the fittest and she would tell me that my marks needed to surpass that of my Asian classmates. She said this with a tinge of humour but she wasn’t joking. My childhood was exhausting.

WILL: I hear you.

WILL: Another thing that I noticed, is how schools can symbolize the inequities across neighbourhoods. When you’re a kid watching television and you see people with a mom and dad and they're sitting at the dinner table and there's a picket fence, you realize that your neighbourhood doesn’t have those symbols of safety or abundance. It was also like that when I was playing basketball and visited other schools. 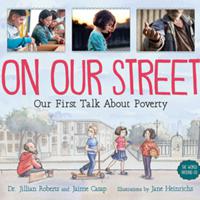 Have You Taught Your Kids About Poverty?

When I visited schools in these neighbourhoods, I notice that there isn’t security or police presence. The kids have an abundance of food for lunch while students back at your school are stealing something from the supermarket because they are so hungry and people don't realize that you know and that's the situation. I was also always fascinated by the paint. In high schools in low-income neighbourhoods the paint was often drab and peeling off like something that reminded you of prison. And in more wealthy schools, it's lively, it's beautiful. The colors — everything is nice, it's well painted, it’s well taken care of.

JAY: What a simple and important observation.

WILL: We don’t talk about this a lot but the school is very connected to housing. It is a representation of the wider neighbourhood and its conditions will likely be similar to housing conditions. Many kids growing up in poorly designed and maintained housing often go to school and see similar conditions. Your housing can give you a sense that you are at the bottom of society and the place that is supposed to create the space and opportunities to change that, often reinforces the same message.