[Editor’s note: Jay Pitter travelled Canada for her forthcoming book 'Where We Live,' to be published by McClelland & Stewart, a journey that put her in touch with inspiring advocates addressing the nation’s housing crisis. In a project for The Tyee funded by the Catherine Donnelly Foundation, she shares some of her conversations, including this one today.]

Most people perceive home to be a private space both physically and symbolically. But for foster kids, home is a series of uncertainties within an overburdened and inequitable public system. The system devours Black and Indigenous kids at rates far higher than the general population. Statistics Canada indicates that just seven per cent of children in this country are identified as Aboriginal yet account for almost half of the kids in foster care.

In Winnipeg, where Dylan Cohen grew up, nearly 90 per cent of children housed in some form of institutional care are Indigenous. Dylan was born to an Indigenous single mother who was apprehended during the time of the Sixties Scoop. For Dylan, therefore, historical and current social factors both contributed to the housing vulnerability he faced as a child.

Intersectional identities and social conditions like gender, class, region, and as previously mentioned, race, affect the extent of housing vulnerability faced by children. However, all children who’ve experienced any form of housing vulnerability share the experience of not being able to choose where or how they live. They entirely lack agency. And for this reason, Dylan and I believe that children are among the biggest casualties of our country’s housing crisis.

Today, Dylan Cohen is a Vancouver-based organizer at First Call: BC Child and Youth Advocacy Coalition and public speaker advocating for young people in foster care. Here’s a bit of our conversation.

Dylan Cohen: Feeling isolated and impoverished was not new to me when I entered foster care. My mother and father weren’t together when I was born. My mother is an Indigenous woman who was apprehended during the time of the Sixties Scoop. She never worked and when she did come into a bit of money, she didn’t spend it to care for me or my siblings. My father was Jewish. He wasn’t around much but based on the neighbourhoods he lived in, I assume that he was struggling also. He died when I was eight years old.

Was there an incident that precipitated you being taken into care?

Well, ever since my father’s death when I was eight years old, I had a psychologist that I went to see on a regular basis. When I was around 14 years old, I began to tell him what was happening at home. We — me and my twin sister — were hungry and wearing dirty clothes. At that point neighbours were making us sandwiches or sharing meals with us. When I told my psychologist about this, he mentioned that foster care might be a good option for us.

Not long afterwards, there was an incident in my home. I flushed my mother’s stash down the toilet. I felt that it was tearing our family apart. Afterwards, I found myself visited by two police officers who remarked, “It sounds like if anyone’s the parent here — it’s you.” My aspiration for agency over my childhood was met with the removal of me from my home, and I cannot recall a conversation with my mother since.

I’m sorry; that’s a lot to take on as a child. What was your first night in foster care like?

My first contact with the system was terrifying. I found myself, a young kid from the suburbs, paralyzed in Winnipeg’s North End shelter. This experience is typical. Our journey through the system starts in violence, in removal from our families and homes, and stripping away our independence. It is a disempowering process that often works against the best interests of the individuals it tries to protect.

When a social worker comes in and removes a child, however justified, it is a process that stops lives in their tracks. It is society saying: Hold up. We can do good work here, but the kid needs to leave. This is where our agency stops. My case plan was failed all along the way.

What exactly is a case plan?

A case plan is the written plan prepared by the social worker. It should take into account what is best for the child in care both in the immediate moment and the future. But often these plans tend to focus on crisis in the moment, not long-term success and wellness. Kids in care constantly have their backs up and claws out.

So, my plan really failed. I moved through several placements, had half a dozen social workers, and for lots of my time in care did not have any sort of home.

When I was placed in homes there was no consideration of my ancestral connections. I was separated from my twin sister. I was placed in rural communities where there weren’t any other brown kids. At one point, the people I was placed with crushed my spirit, tore me down and left me in pieces. I was told that exploring my Indigenous identity was “gaming the system.” I would spend hours quietly telling myself that death would be easier, that dying would be a better way out than enduring the system around me.

At one point I remember I was running through rural Manitoba. It was minus 35 degrees in the depth of a Winnipeg winter. I had a jacket, but little else. I could feel the cold against the numbness that was my soul, my sliver of a will to survive.

That night, I was picked up by the police. I had the cold of the winter on my brown cheeks, and remember being locked in the back of the cruiser like I had just committed a violent crime. From my rural community I was taken to Winnipeg’s core, the very same shelter I spent my first night in when I entered the system three years before. My commitment to my own self-perseverance and well-being needed to vastly outweigh the intentions and behaviours of those around me. My survival depended on it.

You’ve definitely survived, which suggests to me that despite every horrible thing you endured, your Spirit wasn’t crushed. And on top of that, you’re working on an important campaign ensuring that young people in the system do not suffer the pain and systemic oversights you suffered. How are you able to carry the weight of the work you do?

I’ll be honest; I am lucky. I have resilience and strength that has enabled my work as an advocate, but it’s not the common story. When I speak of trauma, neglect and abuse in the system, I am speaking from personal experience. Most people don’t have a reference point to ask, “What if this was different about me?” But I do. Homelessness, poverty and mental health are my other half.

My twin sister Hailey is an amazing soul who I love dearly with so many strengths and so much potential. She has not been a self-advocate in the same way I have. She has struggled. When I speak from my passion for change, for empowering youth, I think of Hailey.

I also have people I keep in mind while doing housing and broader city-building work too. I totally get that. When you’re addressing decision-makers and others who hold power within housing related sectors, what do you want them to know? 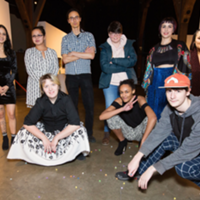 Want to Fix Foster Care? Ask Kids Who Have Been Through the System

Growing up, I could never understand how the rules and decisions that forced me to work so hard to advocate for myself were really in my best interests. The system is guided by folks that want good outcomes for youth. But still, so many of us slip through the cracks. The legislation, regulation and policies that defined each moment in my life were so far removed from my day-to-day experiences.

I want decision-makers to review excellent existing evidence on this issue like the Phoenix Sinclair Inquiry report or the Grand Chief Ed John report. Also, we need to have policy solutions for both the root causes and healing the system. And in all of this work, the voices of young people should be lifted up more. When you work with youth from care, think about our lives as a starting point for change and radical action.

I admire the obvious care for the young people you’re advocating for and with. Doing work connected to your personal trauma and struggle takes a distinct toll. How do you care for yourself?

My sense of community likely looks different from other young adults. I’ve really prioritized surrounding myself with chosen family. I make it a point to do things I love, like play the piano, bake and move my body. My life has ebbs and flows, but I’m generally balanced. I’m good.