Climate change is hitting home across Atlantic Canada, whether you love birds, build homes, host tourists, or just worry your back is about to give out from all that snow shovelling. Scientists say a shift in weather patterns is accelerating due to greenhouse gas emissions from humans burning carbon. It's already affecting lives in the region. Here are six ways.

"There's no question that birding has changed, for good and bad," says David Currie, president of the Nova Scotia Bird Society. While fewer birds are flying through the province, he says, birders are seeing more rare species -- even some tropical ones. In September someone excitedly reported sighting of a masked booby, arrived from below the equator.

Records for bird sightings in Nova Scotia date back 60 years with 478 species documented. But now Currie's members are noting a thinning of migratory birds. "Seabirds are disappearing: puffins, murres, guillemot, and northern gannets."

What's the explanation for all the changes? Currie cites changing weather patterns, including more intense and frequent storms.

A snow pile of rising costs

Too much snow can be a problem even if that's your business. Consider Twins Snow Removal in Charlottetown. The last two years have seen record snowfall on Prince Edward Island, which scientists link to global climate change. Since owner and operator Nathan MacDonald's business model mostly runs on yearly contracts that are fixed in advance no matter what the precipitation level in a given winter, it can mean a lot of extra work for no extra pay. 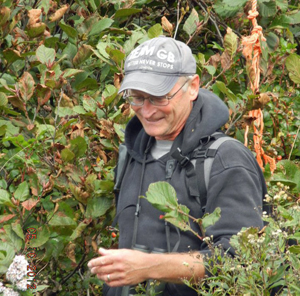 "Based on the last two winters it's hard to be profitable based on contracts," MacDonald says of seasons that have each seen over 400 centimetres of snow. "If you have to go above and beyond the contract, your profits start dwindling."

MacDonald hates to charge his customers more. But for now he operates a handful of trucks and tractors with blowers stretched to the max. "From a business perspective, it causes the prices to go up."

"Sea ice is critical infrastructure for Inuit. They don't just need it for going fishing on the weekend, they need it for survival," says Rodd Laing, research manager of the Nunatsiavut government. People there depend on frozen routes to hunt food and stay warm by gathering wood for heating homes. But shorter winters and warmer temperatures mean "people's usual travel routes or their ability to go out and harvest aren't safe anymore."

Nain, one of the northernmost permanent communities in Labrador, is trying to adapt by creating community freezers. The government will provide bullets and gas for anyone who goes out to harvest food from seals, fish or other sources as long as they contribute to the community freezer. The food inside becomes community property, and anyone can take from it. "It's all based on availability and need," says Laing.

Tony MacDonald remembers when he ran the only charter tour chasing Bluefin tuna off Prince Edward Island. Now, as operator of Tony's Tuna Fishing out of North Lake, his fleet of six boats competes with more than a couple dozen others.

"People come from all over the world to fish these giants," he says, and their odds of catching a Bluefin keeps going up -- from one in five a few years ago to three out of four now, by MacDonald's reckoning. He also sees smaller Bluefins than used to make it to his waters. All of this, he says, could have to do with changes in ocean management along the east coast of Canada and the United States, but it could also have to do with warmer water. 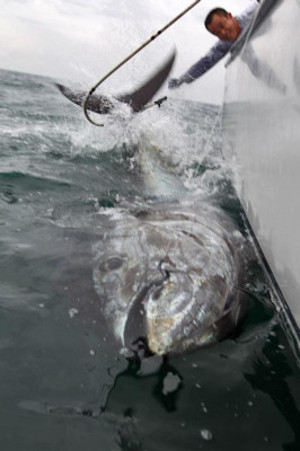 In PEI, the odds of catching a Bluefina tuna keep going up, says Tony MacDonald of Tony's Tuna.

A study in the journal Global Change Biology found Bluefin tuna as far north as Greenland were "likely due to a combination of warm temperatures that are physiologically more tolerable and immigration of an important prey species to the region" and concluded that "a cascade of climate change impacts is restructuring the food web."

Pests attacking trees isn't just bad news for loggers and people who work in more than 500 sawmills in Newfoundland and Labrador. They increase the chance that wildlife habitat or homes for humans will be burnt to a crisp.

Warming weather and increasing rain in the region has led to an increase of tree-damaging insects and tree diseases, which in turn creates more fuel for forest fires, according to Dan Lavigne, the supervisor of Forest Insect and Disease Control with the Newfoundland and Labrador government. Insects like the eastern hemlock looper and the spruce budworm do better as temperatures rise. And rain is a friend to the red band needle blight that affects lodgepole pines. The fungal disease is spread by splashing water.

Stewart Lamont has a front row seat to climate change. His office sits a few metres from the Atlantic Ocean in Tangier, N.S. and he has witnessed the increasing severity and frequency of storms over the past few years. But as the managing director of Tangier Lobster, the changing temperatures and acidity levels in the ocean have more effect on his catch.

"We had the coldest water on a daily basis through April, May and June that I've ever seen," Lamont said, adding that in early September the water has also been around five degrees colder than it usually is at this time of year. But in other lobster harvesting jurisdictions, the water is getting warmer. "I just know things are screwing up," he says.

Which could have mixed results for lobsters. When water is warmer, they seem to become more active, scavenge more and gain weight quicker. Canada's overall lobster catch has doubled in the last 10 years. That's probably because there are more lobsters thanks to changes in their environment, says Lamont.

At the same time, the increasing acidity in the ocean could perhaps be causing the crustaceans' shells to soften. "The nature of our product is changing and not for the better," he said. "If it has a rock-hard shell the odds are it will be fully meated," he said. But, "we are seeing fewer rock-hard shell lobsters. Fewer premium quality lobsters."