The possum, once an animal found strictly in the southern U.S., has for the past several decades been showing up in increasing numbers in Ontario. North America's only marsupial, with its rat-like tail and exposed nose and ears, is hardly suited for Canadian winters. But as the climate warms, it's one of thousands of species around the world that are extending their range northwards.

This summer, at a Toronto city council debate, former mayor and current councillor Rob Ford warned his colleagues they'd better start "watching" the "dangerous" menace. His statement elicited laughter from three wildlife experts on hand, who pointed out that possums don't chew, don't dig, won't go into your attic and are possibly the most harmless urban critters out there.

But in one sense the possum's foothold in Toronto does signal a vast menace: climate change. While melting icecaps and desertification can seem far from home, shifts in our own urban ecosystems signal climate change is having an impact right here. We are seeing that species best able to survive in warming cities are super-adapters. Ones we'd better get used to living with.

These super-adapters share a set of common traits, explains Dawn Bazely, a biology professor and former director of the Institute for Research and Innovation in Sustainability at York University. They're tolerant of a wide range of conditions (like noise, light pollution, and a proximity to humans); they have a non-specialist diet (meaning they can eat just about anything); and they tend to have relatively short reproductive cycles.

"If they're not super smart," says Bazely, "then they're able to adapt really quickly to changing environments."

There are plenty of examples of how these creatures are adapting quickly. For instance, urban bears were found to alter their eating habits, becoming night owls so as to avoid detection. Some city birds, to be heard over the din of urban noise, thrive by shifting higher the frequency of their songs, which are essential to attracting mates, and therefore to breeding. Crows have been observed dropping food packages in traffic and picking up the remains once vehicles have broken open the packaging. Coyotes have turned to small cats and dogs as food sources as their habitat becomes increasingly urbanized.

Australian researchers monitored squirrels in a park in Manhattan's lower east side and found that they may actually fare better in urban environments, because there are fewer natural predators and because they've been able to tolerate a certain degree of human contact.

(Not that all humans choose to tolerate more squirrel contact. In the summer of 2013, a resident in Ottawa's trendy Westboro area blew the whistle on his neighbours, who had, he told a reporter, been capturing squirrels and shlepping them across the river to Quebec. One international media outlet that picked up the story referred to Quebec as the "squirrel toilet" of Canada.)

An emerging field called eco-evolutionary dynamics suggests that species surviving and thriving in our warming and increasingly urbanized world are doing more than just adjusting their behaviours; they are actually evolving at a genetic level to the changes around them.

For example, biologists have hypothesized that the reason why songbirds in North America are developing shorter, more pointed wings is because of forest fragmentation. They have shorter distances to fly and therefore don't need long wings.

Researchers at the University of York in Britain sequenced the DNA of earthworms from various contaminated and uncontaminated sites and found that the worms are evolving genetically to adapt and survive in urban soils with higher levels of mercury and arsenic.

The notion that evolution takes eons so we can't see it in progress is one that has "newly become an old idea," says Colin Garroway, an evolutionary ecologist at the University of Montreal. "We can see evolutionary change in one generation."

There are reasons why cities make ideal laboratories to observe such shifts, explains Garroway. For one, cities are experiencing climate change more acutely than rural areas. Because there's less tree canopy and more dark surface area in urban environments, they attract and absorb more of the sun's energy, a phenomenon known as the urban heat island effect. In the daytime, cities of a million people or more can be up to 3 C warmer than the average temperature in their region; at night, they can be up to 12 C warmer.

Plus, "everything changes in cities compared to forests," says Garroway. "Animals have new predators, new food, new temperatures, new competitors." If you want to study evolutionary adaptation, "this is why cities are good, because change is so drastic."

Bazely stresses that the question of which species will come out on top in our increasingly urbanized and warming planet is unpredictable. She says the fact that "humans are moving around wildlife at an unprecedented rate" complicates things. Some of the most damaging species on the Canadian landscape have been colonizers that came from quite different climates and found themselves at home in a new environment that may have been inhospitable even just a few decades ago. Bazely points to the Emerald Ash Borer and Asian Long-horned Beetle in particular. 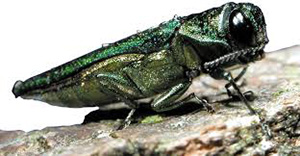 The Emerald Ash Borer, native to China and Japan, probably arrived in Canada in the early 1990s, but didn't manage to get a foothold in Ontario until 2002. It first showed up in Windsor, near the U.S. border, and within five years had spread as far east as Toronto and as far north as Sault Ste. Marie. The beetle has already killed tens of millions of trees, mostly in urban areas, and Canadian Forest Service estimates the treatment, removal and replacement of these trees will reach $2 billion.

Similarly, the Asian Long-horned Beetle was first intercepted at the border by the Canadian Food Inspection Agency back in the '80s. But it wasn't until 2003 that the beetle was discovered in the "wild," at the city limits of Toronto. Given the damage the invasive insect had already wreaked on Europe, and its potential to do so on valuable hardwood species here, the Canadian government immediately established a 150 square-kilometre quarantine area around ground zero of the beetle discovery. More than 600 infected and 28,000 high-risk trees were destroyed at a cost of $33 million. (And, although the government declared eradication victory on the beetle in April 2013, the victory was short-lived; a resident of Mississauga, a city just west of Toronto, discovered one on his car just five months later.)

Still, it tends to be the furry, four-legged species that proliferate in populated areas that are the most problematic from a management perspective. Consider Toronto's urban raccoons. It's estimated that there are 200 per square mile in the city. With no natural predators, an extensive ravine system that provides plenty of fresh water, and an abundant food supply, the animals routinely wreak havoc on residents' garbage and compost bins.

The adept foragers so infuriate residents that a poll found half think killing them would be a good idea. Instead, council recently approved $25 million for new "raccoon proof green bins," unveiled by the mayor, declaring "defeat is not an option."

Bazely sits on Ontario's Human Wildlife Conflict Advisory Committee, formed in 2009 to serve as a "touchstone for government to get an idea of what the public sentiment is." Often, she says, public sentiment is not based on science. In 2008, for instance, animal rights activists protested the Ontario government's policy of deer culling in provincial parks, a policy that her research had informed. As a result of the protests and media storm, the province put the cull on hiatus, a decision she feels was "not science-based or evidence-based."

Bazely isn't saying it's time to cull raccoons or squirrels. She does want more effort from scientists and government to inform the public about the wildlife in their midst. "I want to see more citizen science, more research and data-driven capacity," she says. Coping with creatures moving into our cities is one more way climate change is getting personal in Ontario and across Canada, and Bazely says it's time everyone paid closer attention. "Generally, I want to see a more educated voting public."