Climate change is hitting home across Ontario, whether you love hiking, skating, swimming, or sipping a craft wine from the Niagara region's vineyards. It's affecting jobs, too, including in tourism, shipping and energy sectors. Here are seven ways climate change is getting personal in the province.

Mark Robinson has no doubt that climate change is increasingly playing havoc with Ontario's weather. He ought to know. He chases storms for a living.

The Weather Channel meteorologist and StormHunters personality says swings in weather have been getting wilder over the 15 years he's been monitoring tornados and extreme storms.

"There are more of a clustering of events rather than having a bunch of events all over the place. It can be really quiet for a while, then you end up with these insane days when you're running around like crazy."

Robinson says one factor intensifying the storms he chases in the winter is the larger ice covers on the Great Lakes. Ice cover will keep the number of squalls down, but when they happen, they happen big. Last November, parts of Buffalo were hit with two meters of snow. "It was like nothing I'd ever seen."

The weather is getting to Richard Kocsis, who helps run his family's Mountain Road winery in the Niagara region. "The cold winters have killed a lot of vines. The wet summers have caused a lot of fungus."

Mountain Road aims to produce around 2,000 cases of wine yearly, but "yields are down tremendously because of all the death over the winter and the rot in the summer time." All that rain and snow have dampened tourist visits, too.

Climate change is changing the types of wine Mountain Road makes, Kocsis says. His vineyard has been switching to hybrid grapes like Baco noir, Vidal and Marechal Foch, which do better in harsh climates.

"The hybrids are surviving everything," Kocsis says with relief. "They're very popular, and the Vidal is used to make ice wine."

One way to beat the traffic in Ottawa during the winter has been to strap on your skates and hit the frozen Rideau Canal that runs from the Hartwell Locks at Carlton University through Dow's Lake to the Ottawa River. But changing temperature patterns mean skating to work is less a sure bet.

That reality set in three winters ago, when February was the only month cold enough to sustain Dow's Lake Pavilion's outdoor rink and skate rental business. Last season swung hard the other way.

"It was pretty unseasonably cold. It was like minus 40 for it seemed 70 days straight," says Aaron Ciok, supervisor at Dow's Lake Pavilion.

That put skating commuters back in business, but the weather was so cold it kept away many tourists, chilling his company's bottom line.

For William Hryb, the effects of climate change on shipping routes in the Upper Great Lakes "all boils down to a good old-fashion crap-shoot."

Hryb runs Thunder Bay Shipping, Inc. He says shipping on the Great Lakes usually starts around late March and ends in late December. The Welland Canal that connects Lake Ontario with Lake Erie is closed for part of the winter for mandatory maintenance, and the "opening of navigation" periods have always varied by a few days.

But two years ago, severe ice conditions in Lake Superior pushed the opening of shipping routes back to early May.

Whether the route is open or not, the conditions out on the lake can make people in the industry leery. "Any way you look at it, ship owners are reluctant to put their vessels at risk due to ice conditions, which can vary from year to year," Hryb said.

Late openings certainly have an impact on business, he says. "Revenues are affected, causing operators to lay off personnel."

Blue-green algae is nasty stuff. The bacteria it carries can cause neurological problems and seizures among humans and dogs. While blooms are mostly caused by increased amounts of phosphates from agricultural runoff, warmer water also helps the toxic scum grow.

David Colby, a medical officer for the Chatham-Kent Health Unit and professor of microbiology and immunology at Western University, is grateful for last year's cold winter. But he worries about overall warming trends. "We haven't had an issue this year but we did have issues last year, and two years ago it was really bad."

His unit closely watches local beaches. "When the water is a pea-soup green, a lot of people wouldn't want to swim in it anyway, but we do issue an advisory," he says.

The U.S. and Canada are putting into effect regulations to lower phosphates in the Great Lakes. But Colby still worries that a warming climate will bring more poisonous, blue-green ooze: "The health of our people is dependent on the health of our ecosystem."

The illness, which is carried by the blacklegged tick and can be fatal, has steadily increased in the area over the past few years, affecting people and dogs. 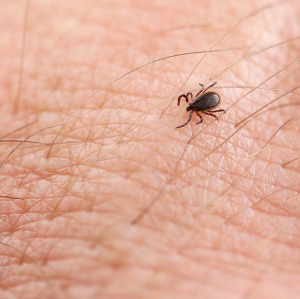 Colby blames a climate more easily tolerated by the cold-sensitive insects. Warmer weather may also cause animals like deer, voles and mice to proliferate -- all of which can be carriers of the disease.

"The possibilities for being invaded increase with warming," says Colby. His unit advises people to tuck in their pants legs or just not walk through heavy vegetation.

In Ontario, climate change is fuelling the wind power industry.

"On average we've increased exponentially over the past 10 years," says Brandy Giannetta, the regional director of the Canadian Wind Energy Association's Ontario section.

The first utility-scale windmills came online in the province in 2006 and now Ontario produces more than 4,000 megawatts. "It's created Ontario a leadership role within the sector. We haven't had the growth in any other area of Canada that we've had in Ontario."

Part of that is due to Ontario's decision in late 2013 to phase out coal production to counter climate change. So many new wind projects has allowed the industry to make cheaper windmills and take advantage of advances in technology.

Giannetta says the boom has meant thousands of hours of work in construction and maintenance. "We've come a long way, but I think there's still a lot to be done."