BC farmers consider manure for power

Dickson is the founder and manager of Cowpower, a renewable energy supplier that sells energy produced by local farmers to B.C. businesses, homes and events -- an operation made possible largely through the use of a single magic ingredient: manure.

The science of biogas

"The technology itself is called anaerobic digestion," Dickson explains. "Essentially, it's a waste-to-energy technology which takes manure from cows, and other food waste that would otherwise go to the landfill, or a wastewater treatment plant, and it converts that into a methane-rich gas. When that gas is pulled out of the system and burned in a clean-burning engine, it produces carbon-neutral electricity."

The process is remarkably simple: when heated to approximately 30 degrees C, and in the absence of oxygen, organic materials (such as manure, and other food waste products) are broken down by bacteria into biogas (mostly methane and carbon dioxide), which can be used to generate heat, electricity and fuels.

The materials remain in the digester for 21 to 30 days, at which time the gas is collected, leaving behind a "digestate" -- an odourless byproduct which is separated into solids and liquids. The liquids are used as fertilizer, and the solids can be kept as bedding material for livestock.

The system is almost entirely self-contained, and with the exception of wood, all organic material can be broken down for biogas production. Not only that, but the potential benefits are enormous: in one year, the manure from a single cow (approximately 40 tonnes) could realistically produce more than 1,700 kilowatt hours of electricity. A herd of 200 could produce nearly 350,000 kw/h -- or between $35,000 to $50,000 worth of electricity.

"I can't stress enough the benefits enough," Dickson says. "You install a wind turbine or a solar panel, and you'll get carbon-neutral energy. But when you have a digester, you're you're also looking at greenhouse gas reductions.... We're capturing that methane, and when you burn that methane, you convert it to carbon dioxide. It's a 23-1 difference in their warming potential."

According to EPA calculations, methane is at least 20 times more effective than carbon dioxide at trapping greenhouse gases in the atmosphere. Thus, by burning methane (and converting it to carbon dioxide), digesters have the potential to make at least some reductions in overall greenhouse gas levels. And for those of us used to holding our noses on our way down Highway 1, Dickson notes, there is one very special additional benefit to the technology: odour reduction.

"I'm sure you've driven through the Fraser Valley in the summertime, and gotten a whiff of what they've been spreading on the fields," he chuckles. "You put manure through a digester, and what comes out the back end just smells like wet soil."

The sweet smell of success

Dickson's enthusiasm is based on solid expertise. He has been involved with both agriculture and renewable energy for the better part of 10 years, first as a renewable energy project manager for the Ministry of Agriculture in Victoria, and later as an employee for the B.C. Agriculture Council.

Cowpower is currently small. Having launched in 2012, the company supports only one digester (located at the Bakerview Ecodairy in Abbottsford), but Dickson's expertise, the strength of the concept, and its potential have led to their association to partner with many -- including VanCity, Science World, Chambar, the PNE and LOCO.

Braden Douglas' Fraser Valley marketing firm Relevention was one of the first businesses to sign up.

"I think Cowpower hits on a neat win-win scenario," he says, "not only for the farmers, who take a chance and put a digester on their farm, but it also gives people like us a chance to give back in a very unique way. It really helps the industry, it helps the environment, and it helps get some additional awareness for green energy, which is steadily becoming more and more popular."

And, as Chambar's Karri Schuermans explains, for businesses looking to be more than simply carbon neutral, Cowpower provides an opportunity to shift capital from offset credits to an initiative that's both renewable and local.

"Cowpower came to us really early on," Schuermans notes, "and explained the concept, which I thought was brilliant. My Dad's an organic farmer in Alberta, and he uses compost and greenwaste from feedlots to fertilize his land. So I understood the process, and why it made sense... and from a vision perspective, knowing that the amount of food waste that a restaurant can generate."

A history of poop power

Anaerobic Digestion isn't a new technology. The idea of using organic matter to produce fuel was first floated in the 17th century by physicist/philosopher Robert Boyle, who noticed potentially combustible gases rising from swamps and marshes.

Although the world's first functioning anaerobic digester was constructed in Bombay (by a leper colony) in 1859, and sewer gas destructor lamps throughout England were being at least partially fuelled by gas from sewers and septic tanks as early as 1895, serious research on the process didn't begin until the 1930s. 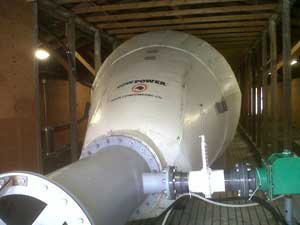 An anaerobic digester like this one, at Bakerview Ecodairy, can cost upwards of half a million dollars.

Today, the technology has proved incredibly popular in Europe. Austria has around 300 biogas plants, and Germany, the world leader, has nearly 6,000. Anaerobic digesters are also in use throughout the U.S., particularly in states such as Vermont (which has a Cowpower program of its own) and California.There is even talk of using it to power large data centres, like those used by Google and Amazon. In Canada, Ontario is the current hotbed of biogas production, home to more than half of the country's approximately 50 digesters -- owing largely to progressive legislation by the provincial government.

The Feed-In Tariff Program, updated in January, now pays 16 cents per kilowatt hour for biogas (a sliding scale depending on how many kilowatts are produced overall), and will pay up to 26 cents per kw/h for biogas produced in any of the province's roughly 35 on-farm digesters.

"That's what we need in B.C., and that's what we've been asking for, but we haven't seen that," Dickson explains, "and with the current administration, we won't see that."

BC Hydro currently pays 10 cents per kw/h for renewable electricity -- far below the 16 cent minimum paid out in Ontario. Unfortunately, in order to make the construction of an anaerobic digester feasible (systems can cost between $1.5 and $4 million to build), farmers would require at least 13-14 cents per kw/h. At present, B.C. has only two on-farm digesters in operation, both of them in the Fraser Valley (the other is unaffiliated).

Cowpower's digester is the smaller of the two, used to process the waste from Bakerview's herd of 50 cows. The system isn't yet economically viable, and, at present, only produces a small amount of energy each year.

"At this point, its primary function is as a demonstration project," farm manager Peter Torenvliet explains. "It's not financially viable for a farm this size to run a digester like this. Total cost was just under $600,000, and when the generator is running, it's covering about one third of our power usage. So, it does have a benefit for the farm, but it will never be a return on the investment."

"The reason why you're not seeing these systems across B.C. is because without the additional support that we supply, the technology isn't economically feasible," says Dickson. "That's the whole reason why the Cowpower program was created in the first place. We've been trying to advocate for this technology, and trying to support farmers in building this technology, and yet the economics just weren't there. We weren't getting the price from the government that we needed. And so we said, 'well, rather than wait however long for government to realize the importance of this technology, let's create a program of our own, and get businesses and others to sign up to help support its adoption.'"

Although the pitfalls are many (economics, lack of government support), and although the company still needs more farms, more partners, and more digesters to achieve its goals, the potential for growth is huge, and word is spreading. For his part, Dickson is optimistic; both Chambar and Relevention intend to continue as partners, and other businesses and events continue to sign up and pledge their support. And in the years to come, Dickson notes, these partnerships will be as important as the technology itself.

"In the future, I hope to see at least 50 anaerobic digesters built on dairy farms throughout the province," he concludes, "helping turn manure and food waste into renewable energy. At this point, the commitment of local businesses and residents is extremely important. If people want to see this happen, they have to get behind it financially to make it happen."