Strolling down Commercial Drive early on a Thursday morning, a sunny-coloured trailer near Hastings Street catches my eye. I'm on a mission to find locally-made treats -- and about to get an education in how small-scale culinary manufacturing can be more cooperative than competitive. 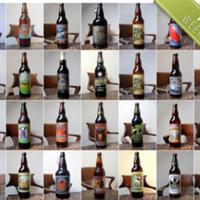 Parked outside the nearly-year-old Woodland Commissary and Smokehouse, I learn Mogu, a Japanese-style burger cart I've never heard of, is prepping for a weekend street food festival in front of the Vancouver Art Gallery. It's a fitting outpost for Woodland, which claims on its website to provide "both studio and gallery space" for young and hip culinary art.

As I peek through the Woodland retail space lined with blueberry sausages and artisanal charcuterie, the whir of a kitchen emanates onto the street. I'm soon met by Erica Bernardi, co-founder of Earnest Ice Cream, who offers to lead me on a tour of the local chefs at work.

"At any given time there's probably about 10 businesses renting space," Bernardi explains, directing me through a series of three production lines. Some are food carts and restaurants, while others package goods for sale at community markets like Downtown Vancouver's Harvest and Nourish in North Vancouver. "Here they're doing stuff for Peckinpah -- probably a pulled pork for later."

"What's a peck-in-paw?" I ask, standing clear as a man navigates the labyrinth of grills, fridges and industrial-sized ovens. Over the deafening buzz of a nearby vacuum sealer, Bernardi explains it's a Gastown BBQ restaurant, and the reason Woodland exists today.

Woodland founders Tyson Reimer and Ryan Murfitt realized their restaurant didn't have enough room for the meat smoking practice they envisioned. Woodland became their answer to a space problem, and serendipitously became a resource-sharing hub for several local food start-ups.

Next I am whisked past the counter used by Pâté Pastiche -- a vegan and gluten-free pâté company working with grains, seeds and mushrooms. "I think they're here one or two days a week," says Bernardi. "They sell with us at the farmers' markets."

Earnest Ice Cream is a new creamery on the block: they've been selling jars of salted caramel, cardamom and vegan chocolate ice cream since May 2012. With access to so many upstarts in Vancouver's foodie and locavore circles, Bernardi says she feels better equipped for business.

For each new community outlet Woodlanders find for their products, three or four other food projects often stand to benefit. "So far we've been lucky in that we haven't actively pursued anyone," Bernardi explains of the shared retail contacts. "For the most part they come to us."

Bernardi says farmers' markets in Vancouver have also been a huge resource for contacts -- a local provider of seasonal fruit, nuts, granola, honey and maple syrup to pack into their ice creams. But while they'd like 100 per cent of their ingredients to be grown nearby, there are two major obstacles any sweets business faces: vanilla and chocolate.

"For our products, there are certain things you can't buy locally," chimes in Ben Ernst, the other half of Earnest Ice Cream. A Canadian climate wouldn't sustain cacao or vanilla beans, anyway. The duo's dairy currently comes from a processor in Chilliwack, which consolidates milk from across the province -- though Ernst says they eventually would like to switch to a singular dairy farm with in-house processing.

The 100-mile thing is a work-in-progress; meanwhile, the pair has found other ways to stay sustainable. "A typical pint of ice cream ends up in a landfill. We really didn't want to be selling something that was just thrown away," Ernst recalls.

What do donuts, ice cream and beer have in common? (Besides the carbs.) In this installment, small-scale treat makers combine resources for sweet and savoury pairings:

Sweet Cherubim -- makers of vegan "bliss balls" -- quit competing with U.S. manufacturers and distributors in favour of making and delivering its own Jiva Organics out of Burnaby.

Ernst and Bernardi decided the low-impact route would be to package in reusable glass jars. "There's no models for it," he says of their choice to go glass-only. "There's no other ice cream company that I've encountered that sells their ice cream in glass jars, so there were a lot of people saying 'Oh, they're going to crack in the freezer,' or 'It's too expensive.'"

Though they produce, package and distribute themselves, Bernardi and Ernst resist calling what they do manufacturing.

"We joke that it's an ice cream factory, but it's really just us pinting by hand," Bernardi says. "It's almost at that level, but the process doesn't have that feel to it yet."

Finally, we arrive at the back of the cavernous 6,500-square-foot kitchen space, where Rags Narine of Cartem's Donuterie is frying and glazing.

Bernardi tells me Earnest often splits the back area with Cartem's, but that's not all they share. "Our orders are quite small and some of our baking suppliers only do big shipments," she says. At this time of winter, Earnest produces about 400 pints per week. To get the right order size, Cartem's and Earnest will go halves on ingredients. "We'll pool our orders to help each other out."

Such a creative business relationship has won the pair an actual medal. Yes, really. At a sandwich and beer "throwdown" hosted by Portland Craft, Earnest and Cartem's collaborated on a donut-and-ice-cream slider that featured mango slices, a spicy strawberry balsamic "ketchup" and praline bacon.

"It was a lemon poppyseed donut and a chocolate patty," recalls Narine, showing me a picture of the faux burger creation on his phone. Not exactly something you're going to encounter in a Safeway freezer aisle beside Ben & Jerry's.

Earnest may not admit their production line qualifies as "local manufacturing," but Rattan Bagga of Jiva Organics has no qualms about calling a factory a factory. Beginning as a family-run Commercial Drive restaurant and retail store in 1980, Sweet Cherubim has expanded to manufacture half of its own organic products from a 36,000 square foot plant in Burnaby.

Bagga says the switch to making their own nut butters, sauces and coconut "bliss balls" was motivated by his bottom line as much as it was by values. "In 1998 we got into distribution. As our distribution grew, we were importing a lot of organic products from the states," Bagga explains. "U.S. companies were distributing in Canada on their own. We were buying from them and competing with them -- we were losing at both ends."

Now operating across Western Canada, Jiva faces its own sustainability challenges. Similar to Earnest's un-local demand for chocolate, most of Jiva's ingredients are imported from warmer (not to mention cheaper) climes. But efforts to support local include choosing nearby designers, printers and label makers for packaging.

I decided to end my search down Commercial Drive with an inspection of St. Augustine's local microbrew selection. Though the keg was recently tapped, I heard a bit about Bridge Brewing, Vancouver's first "nanobrewery" -- a distinction given to particularly small-batch beer makers.

Based out of North Vancouver, Bridge is also an anomaly in that it doesn't sell cans or bottles: beer enthusiasts can choose between a pint at a bar or a refillable growler. When I stopped by, cofounder Leigh Stratton explained how the bulbous 1.89 litre opaque glass containers are meant to be a conversation piece, on top of a reduced carbon footprint.

"We wanted it to be that size because it's only four pints, and it really creates [the feeling of] people getting together," she says. "It's like a bottle of wine -- yes you can sit down and drink it yourself, but usually you have people over and do more of a community sharing."

Stratton says she and husband Jason began selling six months ago along with brewmaster Patrick Doré. Serving on tap and in growlers allows their brewery to skip the corn syrup and other chemicals, though it prevents them from selling through the province-wide Liquor Control Board.

"Our beer has a three-week shelf life because it has no preservatives," she says. "A lot of the bigger breweries are shipped all over Canada or all over the world, so their product has to last months and months, if not years."

Stratton says staying small allows her company to learn from colleagues and adapt quickly. When she first visited the organic hops dealer Hops Connect in Pemberton, she was surprised to see the proprietor swiping credit cards on an iPhone. Stratton made moves to implement the device in her brewery, and reciprocated by sharing point-of-sale software.

"We're really helping each other, instead of us all reinventing the wheel every time," she says.