In 2012, humans were never lower nor higher in the same year. 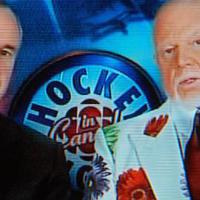 It's Hockey Nightmare in Canada for the CBC

Titanic and Avatar director James Cameron took a submarine in March to the bottom of the Pacific Ocean at Mariana Trench. It had been visited once before, by two U.S. Navy men in 1960. Cameron one-upped them by tweeting from the deep.

Austrian BASE jumper Felix Baumgartner went to the edge of space in October and made a spectacular 39 kilometre jump that broke the sound barrier in the most extreme promotion for the heavily caffeinated and sweetened Red Bull energy drink.

While both are amazing achievements, they're also metaphors for the year that was. A year of the double-dip recessionary Olympics in London, that provided a break between bank scandals. A year of a divisive election in the United States where the winner's biggest challenge is preventing a lemming-like jump over the so-called fiscal cliff and into a recessionary valley.

A year that produced big questions which need to be answered in 2013.

Is this the tipping point?

Connecticut was part of the wide swath of the east coast of North America walloped by Hurricane Sandy in late October. In a cruel irony, the worst mass-murder of elementary school students in the U.S. happened at a public school called Sandy Hook in a Connecticut place called Newtown.

Dec. 14 in the U.S. will be what Dec. 6 is in Canada. A day of mourning and remembrance for victims of a rampage shooting. It might even force a culture shift.

There were other deadly 2012 rampage shootings in a Washington coffee shop in May, a Colorado movie theatre in July, Wisconsin Sikh temple in August and Oregon shopping mall in December. That the 20 victims in Newtown were six and seven-year-olds and the tragedy happened amid the holiday season at the end of an extremely violent year may cause Americans to finally confront the violent popular culture and the proliferation of weapons built to kill.

Was democratic discourse reduced to memes?

Republican presidential candidate Mitt Romney went to the London 2012 Olympics where he criticized the Brits' planning foibles, such as the emergency call for soldiers to do security screening jobs originally promised by contractor G4S. Prime Minister David Cameron responded by describing the Olympics that Romney organized in Salt Lake City a decade earlier as being held "in the middle of nowhere."

President Barack Obama won a second term, but it was close. Close enough that the Republicans may be realizing the mistake of running a billionaire tycoon in a post-recession, post-Occupy election. The Democrat campaign strategists were successful in reducing the discourse to memes. They mocked Romney for remarking that 47 per cent of voters are government-dependent and for calling corporations "people." The biggest hit was "binders full of women," four words he uttered during a debate in which he recounted how, as the Massachusetts governor, he tried finding female cabinet candidates.

While it made for fun times on Twitter, is the devolution of discourse detrimental to democracy?

Should there be an inquiry into the commission?

Wally Oppal released his final report of the Missing Women's Commission of Inquiry on Dec. 17. The former B.C. Supreme Court judge and former Liberal cabinet minister presided over a costly exercise that victims' families feel was tilted in favour of police officers and their lawyers. Among many things, Oppal recommended a regional police force to prevent the incompetence and turf wars that kept the Vancouver police and RCMP from working as a team to catch pig farmer Robert William Pickton many years before the serial killer's 2002 arrest.

The report was dated Nov. 19, but the release was held off until the Monday of the final business week of the calendar year, a week before Christmas. Even in the Oppal Commission's final major act, the marginalization continued. Reporters and victims' families were given just an hour in a lockup to review the phone book-thick, nearly 1,500-page report before Oppal's news conference.

By comparison, when the Stanley Cup riot report was released in 2011, there was a 90-minute lockup to review just 386 pages.

Did the BC Liberals try to privatize the wrong thing?

B.C. Pavilion Corporation cut a deal with Telus for it to rename BC Place Stadium as Telus Park. Signs were even manufactured and waiting in a warehouse to be installed. But something funny happened on the way to the amphitheatre. The B.C. Liberals cancelled the 20-year, $35-million to $40-million arrangement and left the stadium name as is. Premier Christy Clark said it was a "bad deal" for taxpayers; minister responsible Pat Bell called the BC Place name "iconic." Meanwhile, lawyers and lobbyists for competitors Bell, Rogers and Shaw were complaining to the government about the $1-billion, 10-year omnibus contract directly awarded to Telus the previous June. The stadium is expected to lose $49 million over the next three years where the Vancouver Whitecaps and B.C. Lions' rent is subsidized by taxpayers.

The government announced a controversial plan to privatize the Liquor Distribution Branch's warehousing and distribution during the Feb. 21 budget, less than two weeks after Rich Coleman regained the portfolio. It turned out that Exel Logistics had been lobbying for seven years to take over booze hauling and had even hired Patrick Kinsella, Clark's campaign co-chair and a bit player in the BC Rail privatization scandal. Three other companies were shortlisted and the process never reached its conclusion. Before the final proposals were in, it was quietly cancelled when the B.C. Government and Service Employees' Union achieved a new two-year deal. All along, the NDP questioned the concept. LDB delivered a $900-million profit to government in the last fiscal year and the Liberals had no business plan they were willing to show that justified the privatization.

Has Canadians' love affair with the National Hockey League ended?

The National Hockey League lockout may threaten not only another season and the Stanley Cup playoffs, but the future of the hockey business and its standing in Canadian culture.

Don't get me wrong, the NHL and the Stanley Cup will resume someday and many fans will flock back to arenas like sheep. But will the biggest professional hockey league in the world experience an erosion of ticket and merchandise sales?

In the United States, baseball's labour unrest and the cancellation of the 1994 World Series caused fans to do other things with their time and money. Many never came back to the old, ball game, which no longer commands the cultural respect it once did. The decline of Major League Baseball and the rise of the National Football League coincided.

In Canada, the Canadian Football League celebrated its 100th Grey Cup and is talking expansion to Ottawa and maybe the Maritimes. The other kind of football is booming, with higher participation rates than hockey. Major League Soccer teams are in Vancouver, Toronto and Montreal, with a women's team that is third best in the world after winning bronze at the London Olympics. The Women's World Cup is coming to Canada in 2015.

Canada is already a diverse nation in so many ways. Will hockey's dominance be over, once and for all? A victim of its own greed?