After The Tyee published a story on Dec. 22 about one complaint to ASC, the industry body that self-regulates advertising in Canada, Teresa McGee in North Vancouver wrote to say she too had complained, but in her case it was because she was “appalled” the government had characterized LNG, a fossil fuel, as “clean.”

“They are stepping over a line with these ads,” she said. “How is it that ordinary citizens now have the job of making sure the government doesn’t outright lie?”

McGee said ASC investigated her complaint and informed her via email on Dec. 9 that “the advertiser had permanently withdrawn the ad, and that the ASC considered the matter closed,” she said. McGee said she couldn’t share the email from ASC because it is copyrighted and legally privileged information.

While McGee said she has not seen the same version of the ad being broadcast again, she believes the government replaced it with one that instead claimed LNG is “part of” their clean energy strategy, adding that could be seen as a matter of opinion.

Asked about McGee’s complaint and how many versions of the ad there had been, a spokesperson for the advanced education ministry, which has responsibility for government advertising, said in an email, “Government developed a range of material for this particular information campaign.”

The campaign centred on climate leadership, he said, and had four components: Restoring Forests, Clean Tech, 100% Clean Electricity and Supplying Clean LNG. All four ads were available online and two of them were used on television, including one version of the LNG ad, he said.

The Tyee reported last month about another complaint to ASC that centred on the government’s claim that $20 billion had already been invested in the LNG industry, even though no plants have been built.

The complainant in that case pointed out the government appeared to be including money that companies had spent buying rights from each other, which would not have led to the creation of any jobs or local spending, as well as a “pretty arbitrary” percentage of all the money spent on natural gas development in the province’s northeast in the past four years. 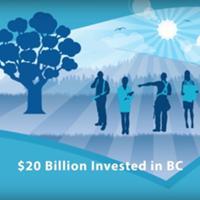 In a Dec. 22 letter to that complainant, ASC vice president Janet Feasby wrote that her organization had previously received a complaint about the advertisement and that the matter had been resolved when the government agreed to withdraw the ad.

The government defended the LNG ad content to ASC, but decided to pull it off the air since it was already near the end of its run anyway, the advanced education ministry spokesperson said. They replaced it with one about restoring forests. Both ads were part of a $1.5-million climate leadership ad campaign launched Nov. 4.

The NDP’s natural gas development critic, Bruce Ralston, said the experience with the LNG ad demonstrates why his party wants the province’s auditor general to review all government advertising.

The government has ignored the request and instead upped the advertising budget by $7 million, he said. “Everyone knows it’s pre-election propaganda for the government,” he said. “On this one it looks like they were caught lying.”

The government has been using the $20 billion figure for at least a year. In an interview with The Tyee at the end of 2015, Premier Christy Clark said, “We’ve got about $20 billion invested on the ground now.”

And in an op-ed the government released last week, Natural Gas Minister Rich Coleman said, “As 2016 concludes, we estimate over $20 billion has been invested by the industry so far.”

B.C. Green Party leader Andrew Weaver said the government has been exaggerating the investment in LNG for years. “The reality is we have not a single LNG plant ongoing,” he said.

The only project where a proponent has even made a positive final investment decision is Woodfibre LNG near Squamish, which Weaver said was greased with a large per-job subsidy from the province that could have been better spent. “It’s just shockingly irresponsible,” he said.