[Editor's note: This is the fifth of The Tyee's Inspiring Ideas for 2013 series, running weekdays through Jan. 1 and collected here.] 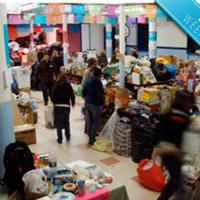 B.C. has a debt problem.

On average, British Columbians owe $38,837 in non-mortgage loans -- more than any other province. Across Canada, consumer debt grew 37 per cent over the last five years -- way ahead of the country's nine per cent inflation rate.

As hurried holiday spending reaches a crescendo, a debt-resistance movement is building south of the border. In New York City, members of an Occupy Wall Street offshoot called Strike Debt are reminding debtors: you are not a loan.

"People feel so alone and isolated when it comes to debt," explains Aleksandra Perisic, an organizer with Strike Debt. "For so long we've thought about it as this personal problem and personal failure. I think what we really wanted was for people to come together and start discussing this collectively and not just feel alone with it."

In November, Perisic and members of Strike Debt launched the Rolling Jubilee, an initiative that buys up debt only to erase it. Described as a bailout for the people, the project uses online donations to purchase debt in secondary markets (where collectors pay pennies on the dollar for loans already charged off by the banks). Instead of employing aggressive bounty hunting tactics, Occupiers forgive the debt.

It's a symbolic gesture, allowing a few Americans struggling with out-of-control medical, credit card and student debt to start fresh. "We're trying to shine a light on the predatory nature of the industry," she says. "At the same time we're trying to shine a light on how the system works." So far nearly $500,000 in donations have rolled in: enough to buy over $9 million in distressed debt.

"It obviously touched a nerve," Perisic says of the Jubilee's eager public response. Combined with donations to Occupy Sandy, another relief-focused branch of Occupy 2.0, donations to the OWS movement in November 2012 outpaced donations for all of 2011. "We've been getting so many emails," she continues. "What's become obvious is that people are really looking for something to plug into. They want to be part of some collective action."

One might ask: how does a group of young activists break into the secondary debt market? Turns out, many debt brokers that deal in personal misfortune are sympathetic to the cause. "Over the past few months we established relationships with people in the industry," Perisic explains. "We have people who are working with us who are helping us find the right portfolios."

Portfolios contain bundles of loans grouped by size, location or types of debt. As a trial, Strike Debt bought $100,000 worth of defaulted medical loans for $5,000. Leading up to the holidays, Strike Debt is drafting letters of forgiveness.

Such a simple idea appeals far beyond the revolutionary roots of Occupy Wall Street. Where the original Zuccotti protests failed to connect with non-activists, Strike Debt has succeeded in reaching everyday altruists. The majority of Rolling Jubilee donations are modest -- between one and five dollars -- indicating broad but unwealthy support.

There are a few new ideas to take away from the Rolling Jubilee project, but sitting around and waiting for activists to cancel your debt isn't one of them. With a couple trillion dollars of consumer borrowing across North America to choose from, the chances of finding relief this way is slim.

What the action does well is start a conversation. Canadians might be surprised to learn they're in over their heads quite literally; the ratio of household debt to disposable income is 163 per cent -- worse than Americans at 154 per cent.

The Jubilee also succeeds at equipping debtors with the tools to know what collection tactics are illegal and what is within their rights. From the website, Strike Debt posted a downloadable Debt Resistors' Operations Manual, a clash of both practical and radical ways to avoid being consumed and distressed by debt.

"What we're trying to do now is channel that energy from the Rolling Jubilee into a debt resistance movement," Perisic explains. "In the Industrial Age, wages were the battleground and workers formed unions to have more power. Today, wage issues haven't gone away, but the battleground is debt. The same way workers formed unions to combat this, we need something similar that will bring debtors together."¬†

Whether your battle in 2013 is student loans, credit scores, foreclosure or bankruptcy remember: you are not alone.

Dear readers, you may notice that comments are not enabled for this story. In what has become a Tyee holiday tradition, we're closing the commenting system for the holidays. Thanks for all the insightful, informative comments in 2012. We look forward with happy anticipation to more of the same in 2013.