Nearly two weeks after Hurricane Sandy hit the East Coast, many New Yorkers are struggling to understand why parts of the city are still in crisis. By the time the lights in my East Village apartment returned, the citywide death toll had crept north of 40, thousands were still displaced and hundreds of thousands remained without basic utilities like electricity, water and heat. 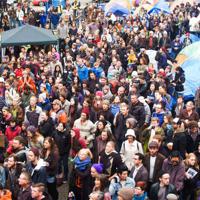 Amid this darkness and uncertainty, a once-familiar movement reignited. Long before the first subway tunnels were pumped dry, members of Occupy Wall Street sprang into action, assessing the needs of people who lost everything in the storm.

"One of the core values of the Occupy movement is neighbours helping neighbours," explains Michael Premo, who also worked in New Orleans in the wake of Hurricane Katrina.

Premo says there wasn't a discussion about whether or not Occupy should help New York City recover from the superstorm; he and four friends who met in Zuccotti immediately began collecting donations for flooded communities in Red Hook, Brooklyn. "We already had the Occupy networks in place. The network was already abuzz checking on friends and relatives. We asked 'How can we help? What do you need?' and it grew from there."

Occupiers reached out through social media under the Twitter handle @OccupySandy. Locals responded. Tech and environmental organizations plugged in. By the weekend, volunteer turnout had ballooned well into the thousands, as ad hoc relief and distribution sites popped up in over a dozen neighbourhoods across Brooklyn, Manhattan, Queens and Staten Island.

In these still-early days of storm recovery, Occupy Sandy has been the first to reach many of New York's poorest and most ravaged communities. Volunteers muck out debris from family basements and deliver meals to seniors trapped in high-rise apartments without elevator service.

I followed several grassroots relief efforts from donation hubs out to heavily-impacted coastal communities. While this type of horizontal action cannot work alone (building inspection and search-and-rescue are best done by professionals), Occupiers are filling early gaps in the relief industry, making disaster recovery a human experience rather than a bureaucratic one.

By the time I arrive at St. Jacobi Church in Brooklyn -- now the buzzing epicentre of Occupy Sandy -- the chapel pews are piled high with garbage bags of donated clothes. Group orientations take place in 15-minute intervals. Volunteers wear nametags scribbled on duct tape. On the second floor, a tangle of laptops and phone chargers represent the movement's social media hub.

About a minute into my arrival, I am back outside packing a Honda with dinner trays bound for weather-beaten Staten Island. Other volunteers sort jackets, load flashlights with fresh batteries, prepare hot meals and haul heavy-duty cleaning supplies into vans.

To my surprise, many 20- and 30-somethings I speak with say they didn't protest against the banks in 2011. They told me Occupy Sandy was simply more accessible and hands-on than New York Cares or the Red Cross.

"The bulk of people that are driving, cutting vegetables, sorting clothes, those are just people that walked in this week," says Patricia González Ramírez, an organizer with an active Spanish-language newspaper for the Occupy movement called IndigNation. "But some of the cooks used to cook in Zuccotti, logistics and communications -- a lot of those people have experienced Occupy."

Responding to requests for more hot food, González helped open a second kitchen down the block, where Burt Wartell, a silver-haired Occupier hailing from Maine, hovers over a sink draining chickpeas. "My background is in hotel and food management, so I thought I could be of use here," says Wartell, who came to New York to visit his daughter Becky after the storm.

"The movement has had a year of experience building infrastructure from nothing," he says of the speedy, contagious response. The Occupy kitchen has sent out upwards of 10,000 meals every day of the week. "In the '60s we had the fire burning, but these kids have got the skills to get things done."

Driving out to New York's Rockaway peninsula, a strip of beach decimated by flooding and fire, police direct intersections in the absence of working traffic lights. The National Guard patrols the main drag in camo-painted Hummers.

But further west, where public housing complexes tower over the horizon, Occupy was the first to respond with supplies.

"Past a certain point, we stopped seeing those services," says Billy Voermann, a video producer who ran cases of water up darkened stairwells to elderly residents. "In the nice parts of Rockaway there's already a dump truck on every street hauling debris off the roads. But further up the peninsula, in the poorer neighbourhoods, we were the only ones out there."

Voermann attributes Occupy's early effectiveness to a lack of bureaucracy. "They cut through any red tape," he says. "The Red Cross would have to wash all the clothes before sending them out -- it's just a slower moving organization."

Near downtown Rockaway, where grocery stores are still shuttered, a surf club has transformed into an improvised resource centre for residents. A club organizer notices my penchant for asking questions, and puts me to work conducting needs assessment interviews (a "delicate job" according to my orientation).

I ask some residents whether they are able to boil water at home and if they have any food allergies. Others focus on cleaning needs. This info allows other volunteers to assemble meaningful care packages that account for family size and level of damage.

Personalizing relief in this way defies the militarized traditions of Red Cross and America's Federal Emergency Management Agency (FEMA). The boxed rations these organizations distribute come with English instructions only; many immigrants do not realize the meals are "self-heating."

In this sense, FEMA is one kind of disaster Occupy has already rallied against: a top-down government agency offering victims more debt (albeit at reduced interest rates). "The problem with FEMA or the Red Cross is they come and impose a model and that's not what Occupy is about," says González. "It's more of a network to see how people can self-organize and access resources to rebuild their own communities."

Occupy's quick response in the week following Sandy earned shining press coverage across various media. But as Nick Pinto of the Village Voice points out, Occupiers can't restore power to the blackened stairwells or inspect houses for structural weakness; there's a wider institutional failure at play.