A plan to significantly expand a Surrey coal port -- allowing it to export four million metric tonnes of the fossil fuel a year, mostly to China, and potentially doubling that later -- is barging ahead quietly without much public awareness or input, says a climate change activist group. 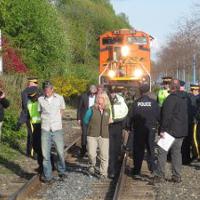 Why We Stopped the Coal Train

According to Kevin Washbrook, a spokesperson for Voters Taking on Climate Change, the burning of that coal overseas would boost the port's emissions to 106 million tonnes of carbon dioxide per year, making it the largest coal port in North America, and a significant exporter of climate change-producing gases in North America, even greater than the controversial Enbridge Northern Gateway pipeline, which would generate between 80 to 100 million tonnes.

Port Metro Vancouver told The Tyee that environmental sustainability and community engagement is a key mandate, which is governed by a government-appointed board.

"There's a pretty rigorous review that is pretty much dictated by the nature of a proposed project," spokesperson Patricia MacNeil explained. "Fraser Surrey Docks has certainly done quite a bit of community consultation around their proposed project.

"There's no expectation that there's going to be any further public engagement activities at this point in time [...]. Their project summary report is probably going to come in sometime in the next couple months, as we review the documentation."

According to the port's website, "Port Metro Vancouver takes a proactive role in its communities through a dynamic community relations program." That program, it states, includes engaging community "based on open two-way communication and meaningful public participation."

According to PMV, Fraser Surrey Docks has already mailed explanatory letters to neighbouring residents in the port area, as well as holding a number of meetings with politicians at several government levels. The City of Surrey and other Metro Vancouver municipalities have also been alerted, MacNeil said.

"It's being put through very quietly, with very little chance for public input," he told The Tyee. "I hadn't even heard about this plan to build new coal port until a couple weeks ago; the public needs to know this is happening."

"The biggest issue for anybody should be that B.C. is poised to be a massive conduit for the export of global warming pollution," said Washbrook. "As a society, we've been very successful in highlighting the risks of the Northern Gateway and Kinder Morgan pipelines, but much less attentive to the scale of coal exports [...]. There's no way in the world you could argue this is in the best interests of Canadians. We've almost lost control of climate change; if we don't reduce emissions immediately, it'll run away on us."

According to Washbrook, there is "no clear framework" to welcome public opinion about applications. But most concerning about the process, he added, is the apparent "black hole" where the port is not required to summarize or reveal the types of public submissions.

"It looks like the public input process is simply a black hole," he said."If hundreds of people provide comments to the port over the next few weeks urging them to deny these two coal export applications -- something we plan on encouraging -- how would we ever know?"

Fraser Surrey Docks did not return several interview requests from The Tyee. However, according to its website, the new coal transfer port is an important investment with benefits to the province and region.

"We're strengthening our role as a key link in Canada's Pacific Gateway and as an important contributor to our local and provincial economy," the company's website states. "This significant new investment to add coal handling capacity will deliver 50 more high-paying jobs to the community. It will mean new tax revenues for Surrey and Delta, which in turn helps fund much-needed services in the community."

When asked for specifics on the community consultation process needed for the port's approval, PMV said there is no set "linear" process or "hard-and-fast" deadline for public input.

"Depending on the potential -- or perceived -- impacts on adjacent businesses or residents, there's community consultation involved," MacNeil said. "And of course, if there are First Nations implications [...] we have a duty to consult with First Nations as well.

"It's hard to say that there's a linear process that every project goes through. They're all quite different, because it depends on a number of factors: what's the potential impact? Where is it? What is it? [...] Regardless of what is required within the review process, as part of it environmental, community and First Nations engagements are identified -- and for any project, a Port Project Permit will not be issued until all those technical reviews, municipal, First Nations and community consultations are complete."

The lack of community hearings or publicity for the project is particularly concerning, Washbrook said, because of the heightened public concern about climate change. PMV states that sustainability is part of its decision-making and operations, but MacNeil was not aware if the company has a policy on climate change specifically.

Voters Taking on Climate Change is pushing for the port to delay its decision until broader consultations -- and greenhouse gas emissions from coal -- can be considered.

"The public consultation process is seriously flawed and the port is failing to meet its mandate to 'operate with broad public support in the best interests of Canadians,'" said Washbrook. "There does not seem to be any consideration given to the end use impacts [like] climate change of the proposed exports.

"The significant climate implications for our future are not taken into consideration and the public ultimately has no meaningful influence over the outcome."

Fraser Surrey Docks says that coal remains a "crucial" energy source around the world, especially in "many developed and developing countries." It adds that, "Effective technologies have been developed to tackle environmental challenges, including the release of pollutants, such as sulphur and nitrogen, according to its website.

Washbrook disagreed, saying that the world cannot afford to increase its fossil fuel consumption. Ultimately, he argued, the impacts of coal on the environment are linked to those of oil and gas -- and there is simply no time to delay on reducing greenhouse gas emissions.

"We're pretty much at end of our tether in terms of climate change," he said. "The time for buck-passing has stopped.

"This can't happen. It's literally killing the planet. It's government in the service of the fossil fuel industry; it's becoming increasingly obvious that's the case. We need to raise a ruckus."