"Coalitions, though successful, have always found this: that their triumph has been brief." -- Benjamin Disraeli, British prime minister, 1804-1881 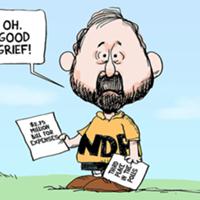 A Conservative-Liberal Democrat coalition government has ruled England for the past five years -- will Canada see its own New Democrat-Liberal coalition running this country after October's federal election?

Don't bet on it -- because there are an enormous number of reasons it won't happen -- and as many equally good arguments against it.

But nonetheless, much of Ottawa's national press gallery appears infatuated with the idea -- and NDP leader Tom Mulcair has supercharged speculation recently with his comments opening that door.

An Ekos poll in December 2014 found 60 per cent of respondents would prefer a Liberal-NDP coalition government led by Justin Trudeau over the 40 per cent who want Stephen Harper's Conservatives to stay in charge.

Add in recent public opinion polls showing all three major parties within nine percentage points of each other and Canada could have a hung Parliament after the fall election.

Odds against a majority

And that means either a lot of backroom negotiations and horse-trading to form a coalition, or the biggest party attempting to run a minority government by doing deals with one or more of the other opposition parties.

With the Conservatives at 32 per cent, the Liberals at 28 per cent and the NDP at 23 per cent in a national Ekos poll in late March, none is close to the magic 40 per cent needed for a majority government.

The Stephen Harper Conservatives have ruled since 2006 but only got their cherished majority government -- and ability to implement hard right policies -- since obtaining 39.6 per cent of the vote in the 2011 election.

That vote was ironically the result of an ill-fated 2008 NDP-Liberal "coalition" vote in Parliament to defeat Harper and teach the Conservatives a lesson. Some defeat, some lesson.

But a coalition government is a far bigger deal than simply defeating the government -- and an extremely risky endeavour.

Columnist and commentator Andrew Coyne makes the case for a post-election coalition, concluding: "A coalition might not sound like such a scary proposition to cautious centrists any more. It might even be a plus."

Maclean's columnist Aaron Wherry chimed in with a column headlined: "Why wouldn't the Liberals and NDP make a deal to replace Stephen Harper? Why not a coalition? Or at least an accord?"

But the reality is that the more a coalition is talked about before an election, the more voters will wonder exactly what they're getting afterwards.

All are theoretically possible. Even the Bloc Quebecois and Green parties could be involved if they have enough seats.

And a coalition government with what policies and priorities? Which prime minister? And how long would it last?

"Once the darling of so-called 'progressive' Canadian thought, the concept of uniting the left to beat the right has slowly fallen from favour. That's probably because a coalition led by the popular Trudeau would look more like an enlarged Liberal party than a marriage of equals," Kheiriddin wrote in December 2014.

But for many New Democrats, the idea that Liberals are either "left" or "progressive" is both absurd and offensive. They see the Conservatives and Liberals as Tweedledum and Tweedledee.

Or in Tommy Douglas's famous phrase, Conservatives and Liberals are merely "black cats and white cats" who run Mouseland and must seek the votes of mice -- despite the obvious contradiction of interests.

So a "cat and mouse" coalition is ridiculous to many NDP voters. They also know that former federal NDP leader David Lewis got much progressive legislation from Pierre Trudeau's 1972-74 minority government without forming a coalition.

But for the Conservatives, the coalition word has an irresistible charm. It's how they defeated the ill-fated Liberal-NDP attempt to push them out of office in 2008 without an election. Public anxiety about the prospect of another possible coalition gave Harper his majority win in 2011.

The Conservatives know and love the fact that many left New Democrats and Greens are willing to throw in the electoral towel and demand an accord or coalition with the Liberals to stop the "horrors" of Harper.

That means many sitting NDP Members of Parliament and potential MPs will be defeated as just enough panicked progressives vote Liberal in NDP-held or friendly ridings to let Conservatives squeak in with three and four way splits.

So count on Harper to focus on the NDP and Liberals coalescing as a means of consolidating Conservative votes -- and attracting apprehensive right-Liberals who are increasingly anxious about Trudeau's inexperience and abilities.

Mulcair's strategy is different -- and has changed dramatically since he outright rejected any coalition government talk in 2012.

"The 'no' is categorical, absolute, irrefutable and non-negotiable. It's no. End of story. Full stop," he said then.

Last month Mulcair said it was Trudeau, not him rejecting any coalition talk.

"We're a progressive party. We want to get results. I'll let other parties explain to you why they don't think that that's a good idea," Mulcair said.

Trudeau said last year that a coalition was a non-starter.

"There are significant substantive disagreements on very serious matters of policy between the NDP and the Liberal Party -- on unity and economy, for example," Trudeau said in February 2014.

"It's very clear that they are not part of the better government that Canadians need and... they're just trying to offer some sort of different government, and that's not good enough for us."

That was then, this is now. But the odds of Trudeau warming to the idea before an election -- or after it -- seem increasingly remote given Mulcair's recent attacks on the Liberal leader.

"Whether it's meeting premiers to work on the future of our federation or meeting world leaders to discuss economic opportunities or terrorist threats, being prime minister is not an entry level job," Mulcair said to a Montreal NDP audience in March, directly targeting Trudeau as having neither "the experience or a plan" to govern.

Green Party leader Elizabeth May, one of two Green MPs, is all for coalition, cooperation, electoral accords -- just about any deal.

That's not surprising, since the Greens would benefit the most from any changes to the electoral system that reward small parties with more seats in any form of proportional representation -- long a Green goal.

The Greens also face the potential of being this election year's Bloc Quebecois -- the party Harper used mercilessly against the Liberals and NDP in 2008 as a reason to reject the coalition approach and later to elect a Conservative majority.

Count on Harper to publicize Green policies as damaging to the fragile economy and ask what price May would exact from Trudeau and Mulcair for her party's support.

While a post-election coalition is not impossible, the odds against it happening appear to be going up, not down as voting day gets closer and closer.