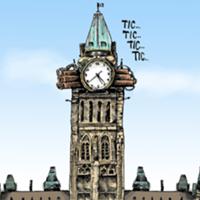 It is apparently a myth that lemmings commit mass suicide by jumping of cliffs, according to wildlife biologists who have studied the rodents.

They might then next want to turn their research to federal Liberal and New Democrat Members of Parliament -- because the evidence of their political death wish is now well documented.

Friday's opposition vote to defeat the Conservative government for "contempt of Parliament" was an exercise in self-delusion, testosterone and faulty logic that will surely result in Stephen Harper returning after the May 2 election as prime minister -- and likely with a majority.

Harper and his party couldn't be happier -- campaigning just after introducing a budget with goodies for many, enjoying 43 per cent support against a Liberal Party at just 24 per cent and the NDP at 16 per cent, according to an Ipsos-Reid poll and facing beleaguered Liberal leader Michael Ignatieff in his first national campaign.

As bad as the Liberal numbers are, Ignatieff's leadership ratings are even worse.

Ipsos Reid found that 49 per cent of Canadians surveyed believe Harper would make the best prime minister, followed by an impressive 34 per cent for NDP leader Jack Layton and an abysmal 17 per cent who want Ignatieff.

Harper also leads in the categories of someone you can trust, who will get things done, who has what it takes to lead Canada, who's running for the right reasons, who has a vision you can support and who can manage in tough economic times.

Layton comes in second place in each of these categories, while Ignatieff is a distant third in all.

Step away from the edge!

But Ignatieff does clearly lead in one leadership attribute: which leader has a hidden agenda. Ignatieff bested Harper by 46 per cent to 39 per cent on that question, with Layton at 10 per cent.

All that should be enough to convince any non-lemming Liberal strategist or MP to step away from the election cliff as quickly as possible.

And while the NDP might have more reason to gamble in the eternal hope of displacing the Liberals as official opposition, the poll should also be a dire warning. In a Liberal collapse, the NDP could lose to Conservatives in three-way riding races.

But there are many more reasons for both parties to have avoided this election.

First, other polls give similar cause for pause. An Angus Reid Public Opinion poll put the Conservatives at 39 per cent, the Liberals at 25 per cent and the NDP at 19 per cent.

And a new Forum Research poll taken since Saturday's election call gives the Conservatives 41 per cent, Liberals 24 per cent and NDP 19 per cent -- suggesting a seat count in which the Tories win 19 new seats for a majority with 162 seats, the Liberals lose 17 to 61, the Bloc rises by seven to 51 and the NDP drops two to 24.

When asked whether the economy or ethics were more important in this election, 62 per cent said the economy, 38 per cent ethics.

The Angus Reid survey found the Conservatives with a 15 per cent lead in seat-rich Ontario, the place where they can find a majority at Liberal expense.

Amazingly, Bloc Quebecois separatist leader Gilles Duceppe actually has a lower disapproval rating at 55 per cent than Ignatieff's 57 per cent. Harper's disapproval is 48 per cent while Layton's is 33 per cent, according to Angus Reid.

Secondly, the Conservatives only need to add 12 seats in this election to have a bare majority of 155 in the 308 seat Parliament -- and a four-year term without needing the opposition's support for anything.

That's a result polls show most Canadians do not want -- but could well get because of the low regard the Liberals are held in.

What the Tories offered

Then there's what the Liberals, NDP and Bloc killed from the budget Finance Minister Jim Flaherty introduced last week -- a $300 million increase in the Guaranteed Income Supplement for the poorest of Canadian seniors.

The NDP wanted $700 million but surely this lesser amount -- $600 a year for single seniors and $840 a year for couples -- would have at least helped out tens of thousands of impoverished elders.

It also would have forgiven $40,000 in student loans for new family doctors and $20,000 in loans for new nurses who work in remote communities and tax credits of $300 a year for caregivers who help infirm relatives.

And there was also $400 million for an eco-energy retrofit program to spur more energy-efficient home renovations.

All of this is small beer compared to the massive costs of new F-35 fighter jets alone, estimated at up to $30 billion, but for voters still reeling from a recession the Conservatives' offerings may be appealing.

End of political funding as we know it

However, perhaps the most devastating reason to avoid this election is the one least understood by voters and least reported by media.

The Conservatives have pledged to end public subsidies of political parties if they win this election. That would mean disaster for most of the other parties, whose own fundraising efforts pale by comparison to the Tory money machine.

And ironically, it was former Liberal prime minister Jean Chretien who is responsible for it, having introduced much-needed election financing reforms in his last term that dramatically restricted corporate and union donations.

That forced parties to increase fundraising by individual contributions but the Conservatives did so with gusto, the others not so well.

All parties receive substantial public funding intended to support democracy, but it also means they are in varying degrees highly dependent on money that will disappear with a Conservative majority, making the Tories even more motivated to win and gain an advantage in the election after this one.

In 2010, the five parties received a total of $27.4 million in annual subsidies based on the number of votes each obtained in the 2008 election multiplied by an inflation indexed amount that is now $2.04 per vote.

The Conservatives would lose 37 per cent of total funding -- the least of any party -- and leave them with a significant advantage over their adversaries. No-brainer for the Tories. And they can claim to be saving the public money for better purposes -- like buying F-35 fighter jets and building jails!

The Liberals, NDP and Bloc argued somewhat persuasively that the Conservatives were in contempt of Parliament over their disdain for democracy, openness and accountability.

So why did the opposition parties foolishly believe that the best way to restore those values is to give Stephen Harper an excellent chance to win a four-year majority?

Now voters who deeply fear a Stephen Harper government with untrammelled power have to feverishly hope the Conservatives do what they will be desperately avoiding -- make a huge campaign mistake.

Nothing less can stop their drive to majority power.

This column marks my sixth anniversary with 24 Hours Vancouver. Thanks to all my readers of that paper and my longer online column version here at The Tyee!