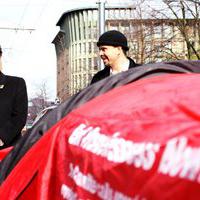 GOLD to Maëlle Ricker for not only winning gold for Canada, but winning it on her home turf (she grew up in West Van), and for making sports scribes' lives easy by having been knocked unconscious failing in Turin and then following through on her vow to redeem herself four years later . . . at the advanced age of 31. The stuff just writes itself.

GOLD to Whistler for trying to kick its (contractual) Coke habit. "Whistler's Live Site is serving tap water and all the performers are given a reusable water bottle that comes with free refills of 'genuine' Whistler water. Vancouver also pledges to go head to head with Coca Cola and make tap water available at the city's two Live Sites, where thousands of people will gather to listen to live music and watch sports events on giant video screens," reports Rabble.ca.

GOLD to Quebec playwright Robert LePage for his "Blue Dragon" stunningly staged, as part of the Cultural Olympiad, at the new The Fei & Milton Wong Experimental Theatre at SFU's School for the Contemporary Arts in the bowels of the new Woodward's. The story, set in shape-shifting Shanghai, is slight but supple enough to support Lepage's ingenious visual effects that incorporate dance, calligraphy, Chinese television ads, quick change stage shifts and bolts of lightning. Lepage wrote the play with Marie Michaud, who plays his ex-lover. Tuesday night's sold out audience gave a standing ovation. Sample some of it here.

GOLD (self-conferred) to the Canadian Banking System. Here, just read their press release. "The Canadian Banking System: Learn About its Gold Medal Performance! ... The Honourable Peter Van Loan, Minister of International Trade, invites you to learn about the continuing strength of the Canadian banking sector. He will be joined by featured speaker Mr. Gordon M. Nixon, President and Chief Executive Officer, Royal Bank of Canada, via videoconference."

SILVER to the Vancouver police, who appear (thus far) willing to let the tent city stand as a peaceful protest.

SILVER to Don Martin of the National Post for giving those British pundits what they deserve for their premature write-off of the 2010 Olympics "not even 100 hours old." Points off for the cheap shot at the end about premature output of a different sort.

BRONZE to The Vancouver Sun's investigative reporter Jeff Lee who cracked the story that the star-powered Today Show is broadcasting from Vancouver during the Games. "Magic is performed," writes Lee. "Operating in three locations, the hosts oscillate between an outdoor campfire pit, the central foyer and an upstairs dining room where the cooking segment is broadcast." And, "In the American world of breakfast news shows, The Today Show is king." Hey, every story can't be pure gold, even when you're the biggest B.C. paper's lead Olympics reporter. Lee also has freelanced for the IOC's magazine.

FACEPLANT for the B.C. Civil Liberties Association, which, when told by protest planners that its rights observers were "not welcome" at Saturday's protests, agreed to stay away. So who's calling the shots over there at an organization dedicated to keeping an honest eye on everyone's civil liberties? The folks in the balaclavas? On Monday David Eby said the BCCLA would revise its policy, and assign observers to all such events.

FACEPLANT for the malfunctioning ice machines in Richmond. A Zamboni shortage in B.C. during the Olympics Games. Who knew?

PENALTY BOX for El Nino. Blame the stubborn weather child (el nino means the little boy in Spanish) for ruining the fun for spectators at Cypress, as the number of tickets cancelled for snowboarding events there now totals 28,000. Rain has washed away snow, reports the CBC. "VANOC decided to cancel tickets for the area for safety reasons after staff began sinking through up to their knees in the spaces between the bales, said Caley Denton, VANOC's vice-president of ticketing." Add the well over a million dollars refunded to the mounting tab to be picked up by taxpayers.

PENALTY BOX for VANOC's transit boss. After months and months of hearing VANOC warn that TransLink would not be up to handling the Olympic crowds, we now see TransLink doing a fantastic job while VANOC's own bus system is awful. Spectators are getting stranded for hours at Cypress and Whistler, and are universally complaining about the long waits.

PENALTY BOX for promoters of a high-end Richmond real estate development, who've invited reporters to a "star-studded" cocktail party where they can test drive a Ferrari. The Feb. 18 party next door to the Olympic broadcast centre is being thrown by Harbour Green Place developers Aspac Developments, "celebrating the most exclusive neighbourhood in the most livable city in the world." There was just something about the unbridled capitalism dressed up as Olympic spirit in the invitation, combined with the offer of graft, that had one reporter saying, "I felt like I needed to take a shower after reading it."