GOLD to Teatro Tatro whose Magical Theatrical Vending Machine parody of the Olympics is a total riot for the family, playing outside the O Zone in Richmond for free to people waiting in line there. Not only are they getting the crowd engaged in the Olympiad, they earn top marks for transporting an art bus overseas from Slovakia and for their unflagging output of energy in a grueling schedule.

GOLD to the strategic geniuses who somehow (rumours of oil on the street) engineered a car crash involving the vice-president of the United States, sending U.S. Olympics heroes Peggy Fleming and Vonetta Flowers to the hospital -- the perfect way to use the Olympics spotlight to teach a skeptical American populace the virtues of Canadian public health care. A statement from the vice president's office said Flowers and Fleming "received minor injuries and were taken to a local hospital as a precaution. They were both evaluated and have since been released." That's the way we do it here. You're in, you're out, good as new, no muss, no fuss, no bill.

Sometimes the Vancouver Sun's Shelley Fralic makes a good point. It's usually by mistake. Monday, Fralic's column sang the praises of the Slovak pavilion, located at the Vancouver International Film Centre. "Word is Stephen Colbert is stopping by later this week," Fralic enthused. "He'll have to get by me first."

Fralic rhapsodized about the food and the friendly atmosphere. However, the first part of the column described her initial attempt to get in: "115 bucks, ma'am," Fralic was told. Happily for Shelley, she was evidently able to explain her importance and potential usefulness. Soon she was in, enjoying the great food and fun. "And if you think the price of admission is too steep," Fralic opined, "then you haven't spent any time in the Olympic houses that charge an arm and a leg just for a pint."

This from a woman who just told us she didn't pay. And there, however inadvertently, Fralic highlighted the true nature of most Olympic festivities: there's the insider experience, and then there's the rest of us. Massive line-ups and inflated prices don't usually show up in media reports, because media don't experience them. Thanks for the reminder, Shelley.

SILVER to CTV figure skating commentator David Pelletier for his on-air giggle fit at the sight of Ukrainian pair Tatiana Andreëvna Volosozhar and Stanislav Morozov. The Ukrainians, sporting some sort of blue Mylar pantsuits, were described by announcer Rod Black as "channeling their inner Avatar." However Pelletier loses valuable points for later declaring: "You can't show up at the Olympics dressed like that." Au contraire, David. Just look at your monitor.

SILVER to Vancouver Coun. Kerry Jang for climbing into one of the red tents homeless activists are handing out to people sleeping on the street. It's not clear how long Jang trained for the event, and he did admit a lack of endurance. "I was [in] there for 30 seconds and I didn't like it. I can't imagine people who have to stay out on the streets all the time. That's why we've been working so hard to try to get them inside." Jang said that he doesn't believe that the Games have waylaid housing problems.

BRONZE to the Integrated Security Unit for allowing the huge "Homes for All" banner to be unfurled from the Cambie bridge. Points off for not letting it hang there for more than 20 minutes.

BRONZE to Olympic street food. Strolling punters who do not wish to guzzle booze and holler will be looking for good, cheap fun food as their way into the street scene. Good luck to them. A city where street food generally consists of hot dogs now offers -- more hot dogs. Some Yaletown restaurants have set up kiosks to peddle their wares, but nine-dollar chili does not really cut it.

Last weekend the best food option downtown seemed to be an Asian food fair at the Plaza of Nations -- lots of good cheap eats, plenty of variety. When a friend was able to buy a Pepsi, it dawned that this was probably not an Olympic event at all, but a Chinese New Year celebration. And we get those every year, without the added security costs.

Left out is a contract UBC inked while trying to remain economically viable. "A secret deal signed between Coca-Cola and the university's administration in 1995 meant students were expected to quaff 36 million cans of Coke or Coke-owned brands over eight years, during which time no other company could set up on campus," an article in The Tyee reported three years ago. "When that proved too tall a task, the $8.5 million contract was extended for two years -- at no extra cost to the beverage giant -- while students tried to drink up the administration's end of the bargain."

Students at UBC and many other campuses have protested such deals, criticizing the environmental and human rights record of Coca-Cola, which gave Toope its Live Positively Award Monday afternoon.

FACEPLANT for The Tyee for giving Shane Koyczan a silver medal yesterday without giving Vancouver's poet laureate, Brad Cran, a gold for his principled stand against participating in any Olympic culture activities. His reason? A clause in the contract that forces artists to "...at all times refrain from making any negative or derogatory remarks respecting VANOC, the 2010 Olympic and Paralympic Games, the Olympic movement generally, Bell and/or other sponsors associated with VANOC," as he explained in an eloquent essay that invokes George Woodcock, an early Vancouver writer and anarchist. In fact, he may have earned the rare double gold for participating in Monday night's poetry night at the Olympic Tent Village homelessness protest.

FACEPLANT for Protest Message Creep. Shortly after Saturday's protest, Newsworld aired a phone interview with Alissa Westergarde-Thorpe of the Olympic Resistance Network. The result was rather confusing. Moments after attacking the Olympics as an environmental disaster, Westergarde-Thorpe took up the cause of the ordinary commuter, pointing out that Olympic traffic restrictions prevented people from driving to work or picking up their kids after school.

Hang in there, beleaguered motorists! The ORN are fighting for you!

FACEPLANT for U.S. women athletes defending their decisions http://www.examiner.com/x-35831-Celebrity-Headlines-Examiner~y2010m2d15-Sexy-olympic-athletes-Hannah-Teter-Lindsey-Vonn-defend-bikini-pics to appear in the Sports Illustrated swimsuit issue. It's presented as an empowering, feminist thing...which we suppose makes reading the issue basically the same as reading Ms.

On the other hand, you've got U.S. snowboarder Nate Holland tripping up as he tries to explain his deep aversion to comrades in tight pants.

PENALTY BOX Go there directly, whoever ordered a chain link fence erected around the Olympic torch. What, no coils of razor wire? 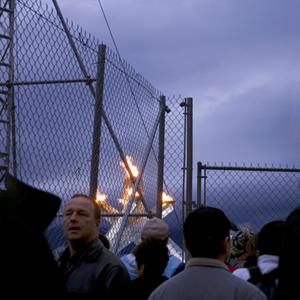