Bruce Laking has lived on Vancouver's Downtown Eastside for 56 years, off and on. Early Monday afternoon, he gestured to a bright red tent on the sidewalk. "Hey, how d'you like my new home?" Laking shouted to a friend. 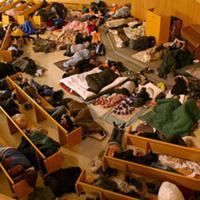 A Two-Year March Against Homelessness

Hundreds gathered today at Pigeon Park, a triangular slice of concrete in the city's most troubled neighbourhood. They rallied for solutions to homelessness and erected an "Olympics tent city" just down the road.

"We're not here for any violence -- we're here for love and peace," the Power of Women's Elaine Durocher told reporters, activists, homeless residents and city councillors. "We're here for the poor and poverty-stricken."

Native elders led a short march throughout the neighbourhood, beating solemnly on handheld drums. Someone pushed a stroller with the crowd. The baby calmly munched handfuls of popcorn from a small plastic bag. Yellow-jacketed police rode bikes alongside, joking with each other.

The walk ended at an empty, fence-fringed lot between Abbott and Carrall streets. Tents sprouted like mushrooms from the red clay and concrete amongst old sneakers and syringes.

Many of the shelters were bright red, the result of a Pivot Legal Society campaign to house Vancouver's homeless and draw attention to the issue. In coming weeks, organizers will distribute up to 500 tents.

Nobody's sure how long the tent city will last. Or where new ones will grow. For now, police keep a watchful eye.

As the Tyee's Monte Paulsen explains below, today's protest is merely the latest incarnation of a decades-old problem.

The provincial government bills British Columbia as the "Best Place on Earth" but rarely mentions that Vancouver is also among the least affordable places in the world to find a home.

Metro Vancouver, in particular, is plagued by market failure across the housing spectrum. Its poorest residents are becoming homeless, working-class parents cannot afford to rent appropriate apartments, and middle-income families cannot afford to buy ordinary homes. Between 10,000 and 15,000 people are currently homeless in British Columbia. That works out to two or three homeless Canadians for each of the roughly 5,000 athletes competing in this month's Olympic Winter Games.

The growth of homelessness in B.C. has been driven by a variety of factors.

Gentrification has been a leading cause. In Vancouver, for example, hundreds of residential hotel rooms have been lost to redevelopment. The low-end accommodations that remain have doubled in price, and now cost much more than the province pays welfare recipients. As a result, many of B.C.'s most vulnerable -- those suffering from mental illness, addiction or other disabilities -- have been driven into the streets.

Cities in the United Kingdom and the United States have successfully reduced homelessness through a "housing first" approach, where homeless individuals are moved from the streets into low-barrier supportive housing. The advantages of this proven approach are two-fold: First, people who live indoors seek treatment sooner and achieve better long-term outcomes than those who shuffle in and bounce out of inpatient treatment centres; second, people who live indoors use far less police, ambulance and health services than the homeless do, meaning that it costs taxpayers less to house them than to keep them homeless.

But unlike federal governments in the U.K., U.S. and Europe, the Canadian federal government led by Prime Minister Stephen Harper has steadfastly refused to fund housing first solutions, in much the same way it has repeatedly tried to shut down Vancouver's safe-injection site.

Indeed, Canada remains the only G8 nation with no national housing plan. If there is an overarching theme to the diverse housing protests scheduled throughout the next two weeks, it is an attempt to call international attention to this fact.

Single parents sleep on the sofa

Those 10,000 to 15,000 homeless people are just the visible tip of the province's housing iceberg. More than 600,000 British Columbians are living in housing that is inadequate, unsuitable or unaffordable.

That figure comes from Statistics Canada's 2006 estimation of "core housing needs." This term includes housing that is too run down or too crowded -- or, as is most often the case in B.C. --- consumes too large a share of the median household income.

StatsCan found 14.6 percent of all British Columbia households were in core housing need in 2006. That's 233,704 households, or about 619,561 people living in housing that costs more than they can reasonably afford.

Renters were almost twice as likely as homeowners to face affordability problems. In 2006, 43.7 percent of B.C. renters spent more than 30 percent of their household income on shelter.

The stats were even worse for the roughly 15 percent of Vancouver-area families headed by single parents. The median after-tax income for a single parent family headed by a woman was $34,350 a year in Metro Vancovuer. Using federal affordability guidelines, that works out to $859 a month for rent. But in Metro Vancouver, $859 doesn't even pay for the average one-bedroom apartment -- and it is about half what median two-bedroom units cost.

As a result, single parents sleep on the sofa every night in Vancouver.

And with less money left over to pay for food and other necessities, one in five British Columbia children live below the poverty line. In fact, the "Best Place on Earth" is home to Canada's highest rate of child poverty for the sixth year in a row.

Nor does housing market failure end with the working class.

Vancouver is the least affordable place to buy a house in the world, according to a recent report by the Winnipeg-Based Frontier Centre for Public Policy. Abbotsford, Kelowna and Victoria are also among the 40 least affordable housing markets.

Ordinary, two-income families earn $64,332 a year in Metro Vancouver, according to Statistics Canada. A typical bank will loan that family enough money to buy a $258,142 home.

That's the 2009 residential benchmark price as calculated by the MLSLink Housing Price Index. That figure averages condos, attached homes and detached homes throughout the region. Apartment properties averaged $382,573, while detached homes averaged $766,816. Half a home is all that ordinary Vancouver families can afford.

Many remain trapped in high-priced apartments for decades longer than they would in any other Canadian city. Business leaders warn that the high cost of housing has become a golden egg that threatens Vancouver's economic goose.

Whether or not these Olympics worsened the region's housing problems, it's clear that organizers have done next to nothing to help matters. The city and province officially declares as "non-binding" a promise to build social housing as part of the Olympic effort -- and investments by the Olympic organizing committee, VANOC, have been described as "chump change."

Since the election of Mayor Gregor Robertson in late 2008, the City of Vancouver has created hundreds of emergency shelter beds over the past two winters, but the city's own estimates show the effort to be insufficient -- and many of these are scheduled to be closed on April 30th after the Winter Games are through.

The province has purchased dozens of old residential hotels, as well as promised more than a dozen new buildings to house the homeless, but even these efforts are nowhere near what's needed to bring 10,000 British Columbians indoors.

The federal government has contributed little toward British Columbia's efforts to end homelessness, earning universal scorn from housing advocates. The hundreds of red tents given to the homeless this week are the start of a year-long effort to call attention to Ottawa's lack of a housing plan.

As the 2010 Winter Games unfold, politicians from all three levels of government navigate among middle-income and working-class voters who share an uncommon bond with the homeless -- they all feel insecure about their housing tenures.

It is amidst this curious gumbo of public compassion and private self-interest that this week's homeless protests are being launched.