The Vancouver School Board could close one of three remaining adult education centres as it makes cuts to eliminate a $2.1-million budget shortfall.

The cuts are part of a pattern that has seen adult basic education become more expensive and harder to access in the province, critics say.

“This time the cuts are even deeper than we would have ever imagined,” said Chris Murphy, former president of the Vancouver Elementary School Teachers’ Association (VESTA), the union representing adult education teachers, at a press conference this week.

Programs that let adults get a high school diploma or upgrade their qualifications so they could access post-secondary education were free until 2012, when the government began introducing tuition fees for some upgrading courses.

In 2015, government cuts to the $6.9-million annual budget for adult education programs at post-secondary institutions meant students started paying up to $1,600 per semester.

The government replaced the funding that year with $10.3 million in adult upgrading grants for low-income students. Critics say the income cut-off is too low to allow access for all adults who need to upgrade their skills.

School districts have continued to offer tuition-free programs for adults seeking high school diplomas, but in the past five years funding pressures and the need to balance the district budget has seen three of Vancouver’s six adult education centres closed.

“The Liberals are creating a social justice crisis, and are doing things that really fly in the face of poverty reduction,” Murphy said.

Gathering Place’s adult program would remain open with reduced hours and the South Hill Adult Education Centre programs would continue. The cuts would save the district about $500,000.

An earlier proposal called for all adult education programs to be delivered at South Hill. The board reconsidered after teachers and students said the south Vancouver location was too far from many students and not accessible for people with disabilities.

Raziel Aguilar, 19, is working towards his high school diploma at the Gathering Place in downtown Vancouver. The proposed budget only commits to funding Gathering Place for one year. If it closes, he would have to take two busses to attend the South Hill Education Centre near Fraser Street and 41st Avenue.

“It might seem like nothing, but it’s a lot because I work part-time,” said Aguilar, who attended the press conference. He said can’t afford a bus pass and “might need to get a full-time job.”

Aguilar would like to go to university and study drama. But the recent immigrant from Ecuador can’t do that without a high school diploma. “Education is a right, not a business,” he said, echoing the sign he carried at the press conference.

At a meeting Monday, the Vancouver School Board — which currently consists of government-appointed trustee Dianne Turner and student trustee Isabella Preite — heard reps from VESTA and the Vancouver Secondary Teachers’ Association call on the board to restore adult education funding and save money by delaying a decision to re-join the BC School Trustees’ Association, an $85,000 expense.

“I think we have to take a bigger view here,” he said. “Should public dollars pay for public institutions?”

The final budget will be presented at a VSB meeting this evening.

The district says the education centres are underused, with two out of three centres operating at just 55 per cent capacity this year.

But George Davison, head of the Federation of Post-Secondary Educators, says declining enrolment is likely a reaction to the introduction of tuition, and a poor reason to cut a program that costs little to run while contributing to overall post-secondary enrolment.

“It is an entry point into the whole education system,” he said. “We used to tell students to just walk in the door, we’ll give you some tests, place you where you can learn more, and you can then feed into any program in the institution and go on to get a degree, trade, whatever you want.”

The Tyee reached out to the Liberal party for their comment on adult education cuts, but did not receive a response by deadline. A Ministry of Advanced Education fact sheet released earlier this month pointed out that the number of students receiving adult upgrading grants, which are available to single students earning up to $24,144, has increased 69 per cent to 7,192 in 2015/16. That’s less than a third of the students enrolled in adult education that year. 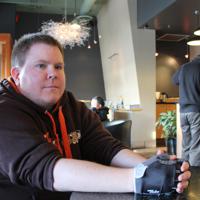 Davison adds that behind closed doors ministry officials are saying they’re paying $13 million in grants this year. If true, the adult education program is costing government almost double what it did when students didn’t pay tuition and enrolment was higher.

Both the NDP and BC Greens, which had candidates at the press conference, have promised to restore funding and remove tuition fees from adult education and English Language Learning programs.

Davison said cost is low and the benefits great. “In billions of dollars in budgets, it’s a rounding error. It’s not that expensive to do it.”