The BC Green Party released its education platform today, promising billions of dollars focused on what it’s calling a Strategy for Lifelong Learning.

“In a world of rapid technological change, the old notion that with a high school or university degree, that you’ll have a job for life, that no longer applies,” said Andrew Weaver, BC Green Party leader and the only sitting Green MLA, at a press conference in Vancouver.

“If we are to ensure that all British Columbians have access to well-paying jobs, not for a short time, but for a lifetime, then we need an education system that is designed for the emerging economy.”

The party’s vision echoes the current BC Liberal government’s view of education as training for jobs in a future economy.

But unlike the Liberal government’s Skills for Jobs Blueprint that “re-engineered” secondary and post-secondary education and training to align funding with in-demand jobs, the Greens’ platform is less prescriptive.

Instead of starting at high school and ending in post-secondary, the Green plan starts with early childhood education and ends with on-the-job-training and adult basic education.

Pledged education investments over the next four years include:

Although the platform goes into some detail on where new funding would come from, the Greens say a fully costed platform will be released later.

Absent from the platform is any investment in post-secondary operations funding or capital projects, including seismic upgrading and new schools for overcrowded districts like Coquitlam and Surrey.

“When you’re putting out a platform that balances the budget,” he said, “what’s critical is that you think about balancing the operating budget, which includes servicing any debt that you might take on to do the seismic upgradings.”

Weaver wouldn’t commit to finishing seismic work by government’s 2030 deadline as, “it would be me making up a date without having engaged with [stakeholders].”

The party pledges to spend $4.2 billion over four years on child care: free daycare for working parents with kids under three who earn less than $80,000; up to 25 hours of free early childhood education for three and four year-olds; and $500 a month for stay-at-home parents with a child under three. For families earning over $80,000 using the program, the cost will be covered by an increase in their annual taxes.

“Instead of getting a credit back, you’d owe a little bit more,” Weaver said.

The platform makes a business case for early childhood education, noting lifelong education and social benefits for children, as well as the greater return on investment as more parents return to work.

The funding will come from a combination of the $567 million government currently invests in several childcare programs, as well as unnamed federal funds and taxes paid by families earning over $80,000 annually who use the program.

Sharon Gregson, spokesperson for the BC $10-a-Day campaign for subsidized universal childcare, said she is pleased yet another provincial party is pledging to invest in early childhood education — the New Democratic Party has already come out in support of the $10-a-day plan.

“They have really now put the BC Liberals on the hot seat, because they have now had 16 years to do something about the crisis, and instead they’ve let it get worse and worse year after year,” she said.

“Early childhood education actually is what good childcare is, and vice versa,” Gregson said. “Why would it be free and complete access for children under three, and only 25 hours a week for three and four year olds?”

But Weaver says families who want more than 25 hours of early childhood education, which he compared to pre-school where children are “learning how to learn,” could pay for it themselves.

The rest goes towards increases in the annual education budget that mean an additional $1.48 billion in annual K-12 spending by 2021, on top of the $330 million government is investing annually to reinstate class size, composition, and staffing requirements stripped from teachers’ contracts in 2002.

In addition, the party is promising $140 million over three years for training teachers in the new Kindergarten to Grade 12 curriculum. That’s $40 million less than the BC Teachers’ Federation is asking for, but higher than the BC Liberals’ promised $100 million for curriculum prep.

The Greens join the NDP and Liberals by committing to maintaining operating funding for private schools, and also called for an end to political parties on school boards.

Other changes without additional funding include reviewing the education funding formula to target schools with the “greatest need”; increasing autonomy for school boards on how and where to spend money; and establishing a post-secondary education task force focused on making higher education more “relevant, accessible, and affordable.”

Post-secondary investments include $10 million over three years for needs-based student grants and up to $2,000 in annual tax relief for recent grads paying off tuition debt for five years. 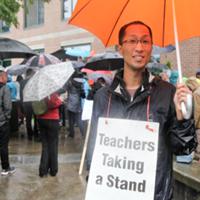 There was nothing about increasing operating funds, or a reduction in student loan interest payments, which the BC Federation of Students has been asking for and the recent BC Liberal budget pledged to partially deliver by lowering interest rates from 2.5 per cent plus prime to just prime rate.

Another $65 million over three years will fund high school and post-secondary co-op and work experience programs. The platform promises courses will “meet the needs of employers,” while helping students find a job within six months of graduation.

There is also $40 million in funding for on-the-job training, as well as retraining workers who lose jobs due to automation or “changing markets.”

“If we don’t update our education system to better prepare all British Columbians for the emerging economy,” Weaver said, “we’ll continue to see many of us struggle to earn stable and secure income throughout our lives.”