The B.C. government is adding an additional $330 million to its annual education budget to cover the cost of hiring 2,600 new teachers required to meet the court-ordered restoration of language stripped from teachers’ contracts in 2002.

In a conference call with reporters yesterday afternoon, Education Minister Mike Bernier announced the BC Teachers’ Federation, BC School Trustees Association, and the ministry had agreed to an additional $150 million in funding.

This comes on top of the $100 million interim hiring funds announced in January, plus $80 million from the ongoing Teacher Education Fund used to hire teachers as part of the 2014 teachers’ contract agreement, for a total of $330 million.

The funds will be a permanent addition to the education budget until the next teacher contract is signed. The current contract expires in 2019.

“School districts are in the process of putting their next year’s budget together now, which is why it was really important that we not only resolved this issue and moved forward, but we notified the school districts right away for their planning purposes,” Bernier said.

How the money, referred to by the minister as the “classroom enhancement fund,” will be divided between the province’s 60 school districts is yet to be determined. But the ministry has committed to funding the full cost of restoring the language stripped from teachers’ contracts in 2002 by then-education minister Christy Clark.

New Democratic Party Education Critic Rob Fleming said he doesn’t see this as a funding announcement, but “a court-ordered compliance announcement, forced onto [Premier] Christy Clark and government after 15 years of waging war on public school system,” he said.

“Having fired thousands of teachers, she’s now legally required to go back to learning supports in place under previous NDP government.”

The $330 million comes out of a contingency budget that Finance Minister Mike de Jong created in the 2017 budget, anticipating a settlement with the teachers’ union and school trustees.

It also remains independent of the ministry’s per-pupil funding model, said Bernier, “because the [contract] language is different district by district. So we have to make sure that we’re restoring the local language.

“It’s not based on the number of students they have. It’s based on the [contract] language: class size and composition levels.”

Bernier also announced an additional $30 million in one-time funding for “overhead costs” associated with hiring more teachers, such as buying new school furniture. He added that government would cover capital costs related to accommodating more teachers, though the costs won’t be known until teachers are hired.

The government will also maintain $20 million in annual funding for teaching assistants from the Learning Improvement Fund, which was created to address class size and composition issues in 2012.

“We’re pleased they were able to continue the $20 million for support staff,” said BC School Trustees Association President Teresa Rezansoff, adding there were concerns it would be cut to $10 million. “It would have [had] an impact on where districts could have teaching assistants.”

The funding announced today comes on top of the $1.1 billion in additional operating funds and the $2 billion capital fund for education spread out over the next three years, the majority of which was announced with the 2017 budget.

Fleming, the NDP education critic, nonetheless predicts school districts will continue to experience budget shortfalls as the money added to hire new teachers won’t be enough to cover unfunded costs like Medical Services Premiums and BC Hydro bills downloaded onto districts by the province. 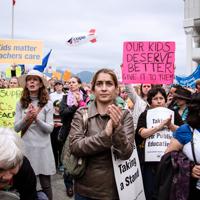 $50 Million for New Hires a ‘First Step’ to Restoring Contracts, Say BC Teachers

“I suspect a number of districts are going to be wrestling with debts when the writ drops,” he said, adding it will show B.C. parents just how much government “badly mismanaged” education.

Fleming also predicted it would be difficult to hire 2,600 new teachers by September: “[It will be] very difficult to put back together what’s been torn apart…. expect it will be very uneven for districts in how they can cope.”

The teachers’ union estimates contract stripping resulted in the loss of about 3,500 teaching positions. But Bernier said there are 60,000 to 65,000 fewer students in the public system than there were 15 years ago, so the same number of teachers isn’t necessary.

BC Teachers’ Federation President Glen Hansman was unavailable for comment. However, the teachers’ union issued a series of tweets critical of the funding.