“When you look at the $350 million in cost overruns just in 2015 alone on information technology spending by the province, we need to do a better job in our procurement efforts,” Horgan said.

“One way we can do that is by reducing the size of the contracts and allowing smaller companies to bid on those contracts,” he said. “We’ve been shutting out B.C. companies... and that has not given us better outcomes. In fact it’s given us large cost overruns over longer periods of time.” The government’s approach has favoured big multinational firms, he said.

The Tyee reported last week that despite promoting jobs in B.C.’s tech sector, the provincial government has signed giant contracts with multinational companies without requiring any of the work be done locally.

According to the NDP, local vendors have received less than $60 million out of $700 million spent on information technology outsourcing. The bulk has instead been spent with large companies including HP Advanced Solutions, Maximus, IBM and Deloitte.

Horgan did not specify how high a cap the party has in mind, nor did the background material for the announcement include a figure.

A spokesperson for Horgan said the NDP would consult with B.C.’s tech community to determine an appropriate cap. Other jurisdictions that already have similar caps in place have set them between $10 million and $20 million, she said.

Horgan said that along with the cap, an NDP government would also restrict the length of contracts and would not automatically renew them. “We want to make sure that every few years, as technology changes so rapidly, that we’re on the cutting edge rather than buying Windows 95 when we should be doing something more effective.” 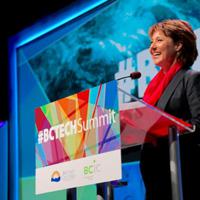 BC Boasts of Tech Sector Growth, But Doesn’t Insist on Local Jobs in Giant Projects

Premier Christy Clark dismissed the NDP proposal. “I thought it was a napkin they’d written it on the back of,” she said. “The NDP plan is so ephemeral, it’s a little bit difficult to understand exactly what they mean.”

The technology sector has grown to employ 100,000 people in the province, with wages 85 per cent above average, she said.

“You’ll see more details of what our government is proposing to do to grow the tech industry in the next few days, including around procurement, because we want to make sure we are creating more B.C. jobs,” said Clark, who is scheduled to speak at the BC Tech Summit in Vancouver today.

Asked if a cap on the size of government contracts is under consideration, Clark said, “What I will say is the procurement process has to be reformed with a mind to making sure that we are supporting more B.C. businesses and giving them a start.”