The British Columbia government has been promoting job growth in the province’s technology sector while signing giant information technology contracts that don’t require the work to be done locally.

“I think having a buy local provision is a really good idea,” said George Heyman, the NDP technology critic. “With the very sizeable information technology contracts that this government puts out, there’s a perfect opportunity to help small B.C. IT and tech companies grow.”

The Tyee has found more than 80 per cent of Deloitte Inc. staff working on one major contract are likely based in the U.S.

In January, the government highlighted that employment in the tech sector had grown by 2.9 per cent, a faster rate of job growth than in the rest of the economy.

But the B.C. government is itself a major purchaser of technology, signing large contracts to manage systems including the public service payroll, the Medical Service Plan, student information and finance ministry revenue.

A 2008 report from the Auditor General tallied 10 such contracts that added up to a commitment of $1.6 billion in government spending.

When The Tyee asked Bond in February whether the government had considered adding provisions to information technology contracts requiring the work to be done within B.C., she said she didn’t have an immediate answer.

A spokesperson for the technology, innovation and citizen’s services ministry later sent an emailed statement saying the BC Tech Strategy aims “to make it easier to do business with government, so that local companies have an opportunity to sell their tech to us.”

The government is “introducing modern tools” and connecting with the industry to discuss making it easier for companies to sell to the government, the statement said. That includes face-to-face meetings at the B.C. Tech Summit and offering small contracts — up to $10,000 — through the BC Developers’ Exchange, it said.

The government has also taken steps to make the procurement process easier and educate B.C. companies on how to bid on government contracts, it said.

The statement also said the government’s procurement processes have to be consistent with national and international trade agreements.

“These agreements ensure a fair and open marketplace for all companies to participate,” it said. “While companies from any jurisdiction may submit proposals, these companies have to comply with government of B.C. applicable policies and legislation including compliance with privacy requirements.”

It is unclear what portion of the work on B.C.’s major IT contracts is done within the province.

When The Tyee asked about one of those contracts last year, for the maintenance of the Integrated Case Management System, used by the Ministry of Children and Family Development and the Ministry of Social Development and Social Innovation, a ministry spokesperson suggested seeking the answer through a freedom of information request. The system had already cost $182 million to build.

The 196-page response to that request, recently received, included a contract between the provincial government and Deloitte Inc. for work on the computer system.

In an appendix the document lists 59 personnel, with names redacted, who will provide the service. More than 80 per cent of them are described as “Employee of Approved Subcontractor (Deloitte US).”

The column head includes “India” as a possibility, though none of the personnel listed are identified as being in India.

A spokesperson for Deloitte in Toronto asked for questions to be emailed so she could forward them to a colleague. No answers were available by publication time.

Shane Simpson, the NDP’s economic development critic, said the government should make every effort to keep jobs doing its technology work within B.C. “If taxpayers are paying for it, to the greatest degree possible they should stay in British Columbia,” he said.

While there’s been concern in the past about whether contracts allowed British Columbians’ personal data to be kept outside the province, there’s been little about where the work would be done, Simpson said. “I have seen nothing that suggests to me the government has put any requirements in these contracts that says some portion of that money has to be invested in B.C. jobs.”

Heyman said the provincial government has been slow to realize the sector’s potential. 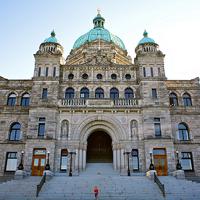 “The government is really trying to recast themselves as a big supporter of the tech sector,” he said. “If this government had paid more attention three, four, five, six, seven years ago to the needs of the post-secondary education system with respect to tech, we’d be much further ahead.”

With the rapid pace of tech change, it would make sense for the government to hire small, nimble companies with a presence in the province to do the work, instead of locking taxpayer dollars into long-term contracts with big multinational companies, he said.

Heyman added that with the government under scrutiny for its “Wild West” approach to political fundraising, it’s easy to draw the link to why they might prefer to do business with big companies. The public has little insight into what happens behind the scenes as these large contracts are negotiated, he said.

The Elections BC donation database shows Deloitte & Touche LLP and Deloitte Management Services LLP have given the BC Liberals nearly $53,000 since 2005. Nearly $40,000 of that was given in 2014, the same year the company won the ICM maintenance contract.