It was presented as the feather on the cap of the province’s new budget. Not only would this be the fifth-consecutive balanced budget, the government said. Not only would there be new investments in education (never mind the Supreme Court decision requiring some of these investments). Not only would the corporate tax rate be lowered on small business. All this — and British Columbians would finally see a reduction in Medical Services Plan premiums.

We asked you what you thought of this plan. Was it a great idea? Was it an empty election promise? Was it too little, too late? As it turns out, some 87 per cent of you were not impressed in the least.

MSP premiums have risen steadily under the current BC Liberal government — fees have more than doubled since 2000. Some, like NDP finance critic Carole James, were left wondering about the timing of the announcement with a provincial election looming on the not-so-distant horizon.

The BC Liberals say the promised reduction will reduce the burden on lower income families, cutting premiums in half for some two million B.C. residents — a savings of about $900 per year for a family of four.

MSP premiums have long been criticized as a damaging and regressive tax — lower-income residents pay a much higher portion of their income to MSP premiums than do the wealthy. We wanted to know what Tyee readers thought of the planned reduction. Will this plan be helpful in the long run?

There was certainly no shortage of skepticism when it came to the timing of this announcement. Tyee readers expressed their discontent — nearly a quarter think it’s an empty election promise, a “cynical bribe,” a “propaganda ad,” an “odious vote buying attempt,” a “dishonest election gimmick,” or, as one reader put it, a “flaccid carrot.”

The issue of what to do with MSP premiums was debated amongst readers. As it turns out, a solid 45 per cent of Tyee Readers want to see MSP premiums eliminated entirely:

Health care is a human right. It should not have a price tag. Dental, eyeglasses and drugs should be included.

This head tax should have been abolished long ago. This reduction is just a transparent election move. Get with it and do the job right or get out of the way and let someone else do it. Abolish MSP premiums!

Just a huge cash grab off the backs of struggling B.C. families. And now they’re going to throw us some crumbs?

Many readers thought that taxes should be raised to increase revenue, but were clear that a tax should be progressive — and definitely not the opposite.

Scrap it. Raise the income tax rate to cover it and adjust the tax scale so the rich start paying something closer to a fair share of the overall cost of government in general and the social contract in particular.

MSP premiums, if necessary to reinforce our national health care funding, should only be collected through a progressive taxation system. Flat fees are unfair. Our health care system needs to be upgraded and any reduction in funding would be counterproductive.

Premiums should be eliminated and funding replaced through an addition to B.C. progressive income tax. The Liberal plan is just another one of their convoluted ways of implementing what should be a good public policy decision as opposed to another re-election ploy.

Get rid of MSP entirely over time — but increase income tax, which balances revenue in a progressive way. And there is nothing wrong with a tax increase, if the money actually gets spent on health care (which, of course, is another issue).

Others were quick to point out that B.C. stands alone compared to the policies of other provinces:

The other provinces can manage without such taxes. Why cannot our incompetent bunch do the same?

This MSP should be done away with — just like all other provinces.

The only province in Canada that continues with an ultra-regressive tax, which is what MSP premiums are.

If B.C. has the strongest economy, then why is the province the last holdout on MSP? Shameful. And no B.C. citizen should fall for this cheap appeal to buy votes.

B.C. still will end up being the only province with MSP premiums. In case you haven’t noticed, this is the province that increased virtually all rates and fees for services whilst providing less service. If you judge good government by how they treat children in care, the aged, and the disadvantaged in society, then they are a failure.

And a few Tyee readers had some other suggestions about where to raise money to cut MSP premiums:

Stop the Site C dam instead (clearly not needed) and don’t build the Massey Bridge, saving billions. Then get rid of the MSP premiums. Easy.

After reading The Tyee’s recent article about the past 16 years of BC Liberal government wealth transfers from poor to rich, this MSP premium cut is insulting and pathetic. The $12 million in donations that the BC Liberals got from a number of donors that other western jurisdictions (the EU, most of Canada and U.S.) wouldn’t allow.... They can take that $12 million from their own coffers and use it to help the non-wealthy human beings of B.C. 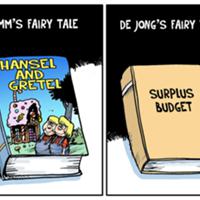 The BC Liberals’ Time-Bomb Budget

Not everyone was against the Liberals’ position on MSP premiums. Less than two per cent of Tyee readers want to keep MSP premiums, and two per cent were pleased the government had listened to voters’ calls for the reduction. Some readers pointed out the origins of MSP premiums:

Remember that the MSP premiums were started up by the former BC NDP government. But still the NDP won’t deal with its little problem of adopting neoliberal solutions.

Either way, it’s clear the majority of Tyee readers were skeptical, to say the least, of the proposed MSP reduction and didn’t have much confidence about what will happen if the Liberals win.

The BC Liberals are masters at bait and switch.

This is a Band-Aid — a “look good in the election” solution. We have no guarantee that next year’s budget will not have multiple cuts.

Any promise from this government that would cost money and benefit working people with a start date after the election is just smoke and mirrors.

And at least one reader had a suggestion for an MSP reduction hashtag.

The Tyee Poll is not a scientific poll, but rather is intended to get the pulse of Tyee readers and the wider community.