Why is B.C. the only remaining province to have a health tax where a family with an income just over $30,000 pays exactly the same amount of tax as one with an income in the millions? 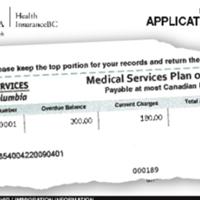 Is B.C. the last province to still use a regressive Medical Services Premium tax because the BC Liberals don't support taxation based on ability to pay, or is it because there isn't sufficient political demand to make a change?

Perhaps both, because not many people know that fewer than 40 per cent of B.C. families pay the tax out of their own pocket -- and MLAs aren't in that 40 per cent!

Good for Green MLA Andrew Weaver for joining the long-standing NDP call to eliminate the MSP tax. He managed to generate some publicity and discussion, which was generally sympathetic to the idea of eliminating the premium tax.

Ontario eliminated premiums on Jan. 1, 1990, when it switched to a payroll tax. In 2004, in addition to its payroll tax, Ontario added an income tax surcharge, calling it a premium even though it is nothing of the kind. It comes under income tax legislation, and it is collected as part of filing income tax in Ontario.

Alberta eliminated its premiums in 2009 without implementing any replacement tax. In its 2015 budget, Alberta introduced what it calls a health-care levy, although it is simply an income tax surcharge like Ontario's. Of course, the Alberta election will determine whether that budget is implemented. One of Alberta's budget documents described the tax and provided a comparison with B.C. and Ontario. It shows middle income families pay more in B.C.

Who pays out of pocket?

B.C. provides MSP premium tax assistance to families and individuals whose adjusted income is less than $30,000 (adjustments are $3,000 for each person in the family who is over 65, a child or disabled). Financial statements for the Medical Services Commission for the period ending March 31, 2013 reported $840.1 million in income covering people in receipt of premium assistance and $1.974 billion in other premium revenue (what other individuals and employers pay) for a total of $2.96 billion in premium income.

A further $0.955 billion was paid by government to the Commission to make up the full amount necessary to cover payments to physicians. For the period ending March 31, 2001, income for premium assistance was $357.9 million and other premium revenue was $895.6 million, for a total of $1.25 billion. For that year the government paid a further $864.8 million to the Commission to cover payments.

The data show that between 2001 and 2013, payment by government to cover premium assistance increased 135 per cent, other premium income increased 120 per cent, but the government’s general subsidy to top up the Commission’s revenue increased only 11 per cent. More than doubling the premium tax, the Liberals have steadily reduced government’s contribution from general revenue to the Commission; that’s continued through the 2015-16 budget with increases to the MSP tax.

When the government announced premium assistance for 2015, its release said nearly one million British Columbians receive MSP subsidies, including more than 800,000 residents who pay no MSP premiums. A freedom of information request produced data showing that for March 2014, 974,040 people received premium assistance (that counts just three people in families of three or more), of which 817,018 received 100 per cent coverage. In July 2014, B.C.'s population was estimated to be 4,631,302, so 17.6 per cent received full premium subsidy and another 3.4 per cent received partial subsidy.

An estimate of how many people have their premium tax paid by their employer can be made from data on the number who are enrolled with MSP as part of a group. That includes almost all of the roughly 300,000 direct and indirect (health and education) provincial public sector. When the minister of finance or the premier talk about paying the premium tax so as to appreciate the cost of health, keep in mind that they don't personally pay a dime; you pay their share as their employer.

A freedom of information requested produced a document showing 1,965,742 people covered as part of a group as of December 2014, that consists of 979,874 "account holders" and their dependants. The 42.4 per cent of the B.C. population that has MSP coverage through a group is probably about the number whose premium is paid by their employer or some other third party, such as a union benefit plan. Together with those receiving premium assistance, that means 40 per cent of B.C. families and individuals actually pay the premium tax out of their own pocket.

Now, who pays your MLA's MSP?

Elimination of the premium tax has different implications for each of the three categories: premium assistance, employer paid and individually paid. While it appears to be a trivial change for those who receive premium assistance, it is important to recognize that a big red tape burden for both government and thousands of poor people would be eliminated if it were no longer necessary to administer the assistance scheme.

The purpose of eliminating the premium tax is not to create a windfall for employers; however, when the Alberta government announced on April 22, 2008 that its premiums would be eliminated effective Jan. 1, 2009, its news release said there would be $1 billion in savings to Albertans and Alberta. Normandin Beaudry, a benefit consulting firm, wrote on its website: "As regards to collective agreements, it would be wise to consider removing all clauses that refer to the payment of these premiums to avoid any recourse or future obligation on the part of the employer. It is worth noting that several Ontario employers found themselves in court following the introduction of the Ontario Health Premium because their collective agreements provided for the payment of the individual premium that was previously in place."

In other words, Ontario eliminated premiums in 1990. But when it introduced an income surtax in 2004, calling it a premium, old wording that remained in some collective agreements led to grievances. If B.C. were to eliminate its premiums, dozens of collective agreements would have clauses that might require renegotiation and unions would likely want to capture the savings reaped by employers. None of that would have to be done before premiums were eliminated. Orderly renegotiation could occur as agreements expire.

Those who suffer the most as a result of the premium tax are the 40 per cent who pay the tax out of their own pocket. Some of their hardship is indicated by the extent of past due payments. A freedom of information request for those data revealed as of March 2015 those covered by "direct payment" were responsible for over $700 million in past due payments; $252 million (36 per cent) was past due over one year. A frequently asked questions section on the MSP website was recently removed. It used to refer to what to do when the government sends a collection agency after you. The same folks who are being chased by collection agencies for their MSP premium tax, pay enough tax so MLAs can get their MSP covered for free at taxpayers' expense! There's something very wrong about that.

It is unlikely that B.C.'s budget could take a hit of over $2 billion by eliminating the MSP tax without one or more replacement taxes being introduced. Those who enjoy employer-paid MSP would not be happy to see the cost shifted on to their personal income tax. A reasonable approach might be to announce at least a year in advance that the MSP tax would be replaced with a combination of a payroll tax and an income tax surcharge, as is done in Ontario. It would take courageous politicians to do that, since far fewer families personally pay MSP than those estimated to either already have it paid by government, plus those who have it paid by their employer. In other words, don't hold your breath waiting for a big change to the MSP tax. An alternative is to stop increasing the tax each year, and let it slowly shrink in real terms.