For years BC Hydro has blandly assured the taxpayers that the $8.8-billion Site C dam project scheduled to come online in 2024 is both needed and viable.

True? Let’s put it this way — in those seven short years disruptive energy technologies will upend not only the business case for this outdated megaproject, but perhaps even the need for BC Hydro itself.

Energy expert Tony Seba from Stanford University specializes in crunching numbers on disruptive energy issues. His most recent projections, detailed in a June 2017 presentation, illustrate just how far BC Hydro has shoved its head in the sand (or somewhere else).

A frequent criticism of renewable sources is that they are intermittent. When the wind doesn’t blow, for example, turbines don’t generate power. Without an economic way to store solar or wind energy you needed generation from sources like Site C or gas-fired power plants to ensure enough power to meet peak demand.

But to quote our most recent Nobel laureate for literature, “the times they are a-changing.”

Between 1995 and 2010, the cost of lithium ion batteries fell by 14 per cent each year. Since 2015, those costs reductions have accelerated to 20 per cent annually due to huge investments from the trillion-dollar automotive sector’s new interest in electric cars. Large scale grid-level battery storage is just starting to gain traction, but will soon transform how we consume electricity.

Last year utility giant Southern California Edison requested a large-scale battery facility after a disastrous leak at a gas storage facility in 2015 released 95,000 tons of methane into a local community. Tesla managed to install 20 megawatts of grid energy storage on the site in a mere 88 days. Compare that nimble timeline to the more than 50 years Site C has been on BC Hydro’s agenda.

According to Seba, the electrical grid itself is ripe for disruption. So-called peaker plants are brought online only to meet periods of high demand and are thus inefficient capital assets. Fully one-third of giant utility Consolidated Edison’s generating capacity sits idle 94 per cent of the time. That fragile model is about to be shattered by a disruptive new business approach akin to an Uber for energy storage.

Most North American energy consumers spend up to 50 per cent of their energy costs on what is called demand charges — paying higher prices for electricity at times of high use. New companies like Stem are now offering battery storage as a service to businesses. They install and maintain a battery behind your electrical meter with zero upfront cost. It stores electricity from the grid when it’s cheap and splits the resulting savings with their customers.

According to Seba, by 2020 this service would cost residential consumers about 20 cents per day for four hours of energy storage. Who wouldn’t want to pay $6 per month to cut their energy bill in half? This transformation may spell disaster for old school utility companies, since shaving peak demand will eliminate the most profitable part of their business model.

Then of course there are the plunging costs of solar energy. Back in 1977, solar cells cost about $77 per watt. They are now as low as 20 cents and dropping fast. The installed capacity of solar generation is doubling every two years.

Luddites might point out that solar generation now makes up less than two per cent of installed global capacity. Perhaps a mathematics refresher is in order.

A doubling every two years means that solar is on track to replace all installed global energy generation by 2030. Obviously there will be other sources of energy than solar in our future. However the overall economic trends for renewables are crushing for conventional energy sources.

Some of the biggest utility customers such as Apple, Google and Facebook are already investing heavily in renewable capacity to meet their own energy needs. Couple that with collapsing battery costs and storage-as-a-service and the business case for centralized utility companies starts to look very dubious.

We have heard a lot about grid parity, where solar generation costs meet or beat those of conventional sources. Deutsche Bank now believes that 80 per cent of energy markets are already there. Seba instead speaks of something he calls “God parity,” where rooftop solar generation and storage is cheaper than the cost of sending electricity over transmission lines — about four cents per kilowatt hour. At that point, even if utilities could generate electricity for free, they could not deliver it cheaper than consumers could make it themselves.

Would this not be a posterior puckering prospect for most utility companies? It already is. Power companies throughout the U.S. and Australia have been in pitched battles with their own customers for years over the existential threat from rooftop solar. Add in the recent availability of cheap battery storage and this may soon become a death spiral.

How close are we to this “God parity” of four cents per kilowatt hour? A new project in Dubai is generating solar at less than three cents a kilowatt hour. Tucson Electric just signed an agreement for a 300-megawatt solar plus battery storage project for only 4.5 cents a kilowatt hour. Incidentally, the former head of the Site C Joint Review Panel pegged the delivered energy costs of this 1950s era project at about three times that much if it ever gets built. 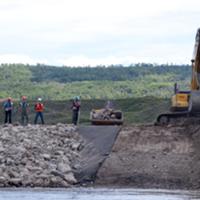 BC Hydro’s institutional myopia is obvious in our dismal deployment of emerging renewable technologies. How much utility level solar do we have in the province? Zero. In fact Canada’s entire solar capacity is less than New Jersey. Geothermal generation? Not a single kilowatt, even though B.C. has some of the best geothermal resources in North America and world class drilling expertise.

The Meikle Wind project that just opened in Tumbler Ridge brings provincial capacity of that renewable sector to 674 megawatts — about four per cent of our provincial total. Why isn’t BC Hydro also linking this wind capacity with innovative rail energy storage? The site happens to be close to 130 kilometres of rail lines with an elevation gain of approximately 900 metres.

In fact, new renewable investment of any kind before 2030 has already been nixed by BC Hydro. Why? An Eisenhower-era dinosaur named Site C.

The business case for Site C would be uneconomic today. By the time it is scheduled to open in 2024, the economics will be laughable. BC Hydro itself may well be swept aside by coming technological change. And given the way they have tried to cram this $8.8-billion boondoggle down the taxpayers’ throats, many British Columbians may be saying good riddance.