I awoke Wednesday to find myself traveling through another dimension, a land of shadow and not much substance, a dimension not of certainty but of questions, a world of red, orange, and Green, a journey into a land of pundits, prognostication, and pontificating. Am I in the Twilight Zone?

You are in Limbo. It’s the B.C. political section. Neither Heaven nor Hell but in between, the fate of the wishy-washy. With Christy Clark’s Liberals currently at 43 seats, the NDP at 41 and the Greens at three, pending recounts and the tallying of absentee ballots, B.C.’s political future is uncertain. A razor-thin Liberal majority, a Liberal-Green coalition, an NDP-Green government, or a decisive mixed martial arts cage match are all possibilities.

But this time around the left was split. And now Green leader Andrew Weaver is starring in a B.C. version of The Bachelor — suitors all around, swearing they’re here for the right reasons. Perhaps they could do this Survivor-style where a tie vote means the contenders are forced to make fire. Or in keeping with the Twilight Zone theme, Weaver could be cast as little Billy, the tyrant who banishes the unworthy to the cornfield. With three seats the Greens are not even recognized in the legislature as an official party, but do you want to be the party leader who mentions that to Weaver’s face? Mild-mannered Andrew Weaver has now been transformed into the mighty Green monster, Balance of Power Man.

As superhero gigs go, it’s not the best. Being a giant green monster has its advantages, certainly — nobody complains when you’re eating fried chicken and man-spreading on the SkyTrain — but once the rampage is over, people tend to blame you for stuff. Weaver has a wish list for the party that would win his support, but pitfalls await. Even in his enviable position there’s only so much Weaver can ask. If as reported his priorities are campaign finance reform and proportional representation, that leaves out environmental issues like the Site C dam and pipelines. How will Green supporters react if Weaver’s priorities turn out to be mostly about advancing the political future of the Green Party?

The BC Green Party is a bit of a cipher. It has the advantage of its name, the clearest brand in politics. But that name may lead voters to believe they know more about the party than they do. You can call your political party Beyonce, but that doesn’t automatically make you destiny’s child. 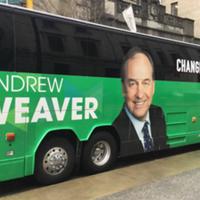 The Greens have already alienated some B.C. voters just by sapping enough support to divide the political left and give Clark another possible shot at governing. If Weaver chooses to back the Liberals, will that lead to a further divide? Will the B.C. environmental movement split into capital-G Greens and small-g greens who abandon Weaver’s party in disgust?

It doesn’t help that Weaver’s worst moment in an otherwise capable debate performance was his silly schoolyard taunting of NDP leader John Horgan: “You gonna get mad, John?” Add in the fact that the Liberals have slyly supported the vote-splitting Greens, at times even in ads, and Weaver might be expected to throw the party’s support behind Premier Clark, the hard-hatted champion of Site C. What will Dr. David Suzuki say then?

Close as the election was, the Apathy Party was the real winner once again. Turnout was just 57 per cent. B.C. has been condemned to Limbo by a lot of people who couldn’t be bothered. As for Dr. Steve, he at least has the satisfaction of knowing that the six votes he cast had a real impact. I trust those five deceased citizens are grateful for my assistance.