Five days before the election in British Columbia. Will there be a new premier at the helm? After 16 years of the Liberals in power we certainly need a new direction, a new premier, one who will truly care about the people and the richness of the lands and waters we have.

Not a premier like Christy Clark who serves big business, looks for revenue and jobs in our resources, and runs roughshod over First Nations rights by approving developments that destroy those rights. It is time for a change.

When Gordon Campbell’s Liberals came to power in 2001, it was with a fiery relationship with First Nations. He had campaigned on a referendum on treaties that was totally opposed by First Nations. But in 2005, the premier totally changed his stance on First Nations and endorsed “A New Relationship” vision, a new direction negotiated with and endorsed by the Union of BC Indian Chiefs Chief’s Council.

When Christy Clark came into power, she didn’t endorse the New Relationship and did not continue in her predecessor’s path. In fact, she did not have much appetite for working with First Nations even though First Nations are key to economic certainty in this province. Her way of dealing with First Nations is to sign on different kinds of agreements that provide things like tenure for forestry, and smaller amounts of revenue sharing.

On Tuesday, the Coast Protectors and the Union of BC Indian Chiefs launched a campaign called ABC, “Anyone But Clark.” They encouraged First Nations to get out and vote against Clark, whether it was for the Green Party or the NDP, to just get out there and make a difference. There were many reasons why this campaign was started and why First Nations feel this way.

Christy Clark has not addressed the big issues in this province. The issue of aboriginal title has not had any resolution. In 2014, the Supreme Court of Canada ruled that the Tsilhqot’in Nation had title to five per cent of their territory they had put before the court. The Tsilhqot’in and B.C. signed a memorandum of understanding, but have not been able to conclude those negotiations. Almost three years, and B.C. cannot come to an agreement on what the court already decided. If this were a business deal, B.C. would have had this completed within a year.

Not only has the Clark government not been able to settle with Tsilhqot’in on a Supreme Court of Canada ruling, they have not worked with First Nations in B.C. to figure out a process on determining how to deal with aboriginal title lands. Instead, they wait for the next case to rule on aboriginal title, as First Nations become more frustrated at the lack of cooperation in negotiations with the province.

The treaty process is still very slow and not yielding results for those First Nations in B.C. who really want to conclude final agreements for their future. B.C. refused to appoint a chief commissioner of the process for years, and yanked an offer of the position to George Abbott, a former cabinet minister of Gordon Campbell, at the last minute. The treaty commission limped along for several years without the chief commissioner, and the other commissioners valiantly tried to fill the gap. Still, there was renewed hope as the federal Liberals were elected and a new commitment was made to treaty making by all parties.

Settling aboriginal title is important to the economic certainty in this province but, despite that, First Nations’ right of consent has been totally ignored in all developments that Clark’s government has approved. Kinder Morgan’s Trans Mountain pipeline and the Site C dam are two of the most prominent projects approved. Throw in the Pacific NorthWest LNG and Woodfibre LNG projects, and Clark has alienated many First Nations, making reconciliation a meaningless word.

Clark rationalizes these projects as being in the public good, a legacy for the future (in the case of Site C) and the creation of needed jobs. But all the projects would create more greenhouse gases, and if built Pacific NorthWest LNG would account of our total allowable emissions under B.C.’s 2050 climate target. No wonder the climate leadership team’s recommendations were largely ignored; Clark has no vision for reducing carbon in this province.

The requirement for free, prior and informed consent, as mentioned in the Supreme Court of Canada cases including Delgamuukw and Haida, in the Declaration of Indigenous Rights and in the calls to action of the Truth and Reconciliation Commission, has not been accepted by this Liberal government.

The province uses the number of First Nations who have signed onto LNG revenue-sharing agreements as a sign that these projects can go forward. But every LNG project will affect First Nations territories differently, especially if an LNG facility is built on their lands or the proposed pipelines will affect sacred sites or ecosystems that sustain wildlife, birds and fish that First Nations people depend on.

These are very large issues that have caused First Nations leaders to start the “Anyone But Clark” campaign.

Add to them the lack of opportunity for First Nations to create clean energy. The B.C. government chose to proceed with Site C knowing that there would be little or no opportunity to create other forms of clean energy for the grid, an opportunity that First Nations have embraced. (In fact, BC Hydro’s Standing Offer Program, which is the only way to provide energy to the grid, has been allocated to 2019 and there is a long waitlist past that.) 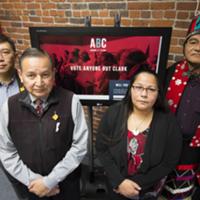 Clark Gov’t Has ‘Virtually Neglected’ the People of BC, Say Indigenous Leaders

In a recent clean energy survey of 105 First Nations, 98 per cent said they were involved in the clean energy industry or wanted to be. These 105 respondents were responsible for 78 operating projects and 49 in development. It’s a large endorsement for the industry, but there is no current opportunity to develop clean energy on the horizon. The respondents of the survey have spent approximately $35 million in projects to date and would spend another $3.3 billion in proposed 249 projects if there were opportunity. The shortsighted government is overlooking a huge investment for B.C. and a great economic opportunity for First Nations.

Will the campaign to get Christy Clark out motivate First Nations people to vote? Will all the unresolved important issues not being address or going against First Nations consent cause them to go to the polls? One can never know. In several ridings, if all eligible First Nation voters went to the polls, they could determine who won the seat. Almost 250,000 people voted in the advance polls last weekend.

There is interest in this election and a great desire to have a new government, a new direction and a different future than the one the current Liberal government is offering.