We tend to take the present status quo in education as eternal; but the British Columbia post-secondary system is still quite new and has changed dramatically since it began. It needs still more changes.

Until the 1960s, the University of British Columbia and Victoria College (a branch campus of McGill) offered the only real post-secondary opportunities here. Even UBC was lucky to survive the Depression: businessman George Kidd advised the government in 1932 to save money by shutting UBC down, with brighter students given scholarships to schools “elsewhere in the Dominion.”

As veterans returned home after the Second World War, many went to college or university tuition-free and with a stipend for living expenses. Here in B.C., the Cameron Commission Report of 1945 showed demand was intense for more accessible post-secondary education all over the province. The Socreds finally got around to it by making the University of Victoria a full-fledged university in 1963, founding BCIT in 1964 and launching Simon Fraser University and the first community college, VCC, in 1965.

W.A.C. Bennett preferred to spend money on megaprojects rather than schools, and he ushered in the new post-secondaries with as little money as he could get away with. Later governments followed his example.

When I moved to brand-new Cap College in 1968, I took a two-section teaching load in the fall so I could also pursue a master’s at Simon Fraser. My two sections earned me $400 a month ($2,800 today). Combined with my wife’s salary as an elementary teacher, we scraped through.

Tuition at Capilano College in 1968 was $20 per 3-credit course, or $100 for a full semester of five courses. That was the equivalent of $700 in 2017 dollars. Today the same five courses at Capilano University for a Canadian citizen or resident cost $1,878.

Community colleges had originally been funded by their communities, to serve their communities. Now they are funded by the province, which wants to pack as many students as possible into every classroom at minimal cost. A program that under-enrols, or that can deal with only a few students at a time, is automatically an “expensive” program and likely to be culled.

The colleges’ university transfer courses in the arts and sciences had been a good way to qualify for UBC and SFU while living at home and getting personalized instruction. Such courses began to become “expensive” as business-oriented programs attracted more students. The colleges became tax-funded subsidies for employers who no longer had to train their own workers. By the 1990s they were also turning into pedagogical shopping malls, where programs that couldn’t attract enough customers were soon replaced by other programs.

Not long after Gordon Campbell’s Liberals took over in 2001, they boosted tuition fees dramatically. As an instructor I was sure we’d drive students away, but Campbell was right: high tuition was no deterrent to demand.

He also taught administrators a lesson: just one college president protested about the tuition hike and other problems, and the Liberals made it clear that such complaints would be firing offences. Perhaps it’s a coincidence that since then the number of college administrators has grown and their salaries have soared.

According to the Capilano Faculty Association, “excluded employees” (those outside collective agreements) have almost doubled since 2002 and total excluded salaries have risen from $2.6 million to $6 million. Faculty have declined from three out of five employees to one out of two, while administrators have increased from six per cent to 10 per cent. The student population has grown just one per cent — but 13 per cent including international students.

And thereby hangs a tale. The predicament of B.C. students would have been even worse if not for the growing numbers of international students showing up on campus. They had to pay the full cost of their education — which also helped to fund extra classes for Canadian students.

By the early 2000s, college deans were flying (at their colleges’ expense) to education fairs in places like China, Korea and Japan, competing with other schools to recruit as many kids as possible. 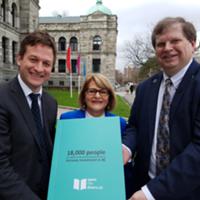 The transformation of some colleges to “teaching universities” was a marketing gimmick. Some parents of international students were glad to pay their children’s full tuition costs (plus living expenses and travel). But they wanted their kids to have a degree from a university, not a mere college. Gordon Campbell gave them what they wanted.

This was a sharp departure from the original vision of the colleges as servants of their local communities, providing programs those communities wanted. But as they grew bigger and costlier, successive governments had lost interest in funding them. The provincial share of funding began to shrink while the students’ share began to grow. Tuition fees now have a two per cent annual cap, but only because internationals take up the slack.

I mentioned earlier that Canadian students pay under $2,000 for a year’s tuition at Capilano; for an international student, however, a five-course semester at Cap costs $8,415 — the full, unsubsidized cost of instruction.

This is not to demonize international students. They’ve greatly enlivened our universities and colleges, and I found them a joy to teach. But the Liberals have treated them as a cash cow, a convenient way to keep provincial funding as low as possible.

This is a shortsighted policy, a rip-off more than an investment. International students may go home with a B.C. degree, but they won’t recall their education with much fondness. Meanwhile their Canadian classmates are staggering out of school with too much an average student debt of $30,000 — and the degrees aren’t even the guarantee of a good job anymore.

The system has to change if it’s to benefit both B.C. and students. In a coming article, I’ll look at some options future governments could consider.