That was the message Rob Fleming, NDP advanced education critic, delivered in the legislature Wednesday when he presented more than 18,000 signatures collected by the Federation of Post-Secondary Educators (FPSE) in favour of increased investment.

The signatures are part of the union’s Open Door campaign to draw attention to what they say is a 20 per cent cut to student funding at B.C.’s 25 public post-secondary institutions since 2002. The cuts equal about $350 million, compared with a current advanced education budget of $1.8 billion, the federation says.

The federation, which represents faculty at B.C. colleges and teaching universities, says as a result it’s harder for students to afford an education, citing a 2013 Bank of Montreal Student Survey that found B.C. students expected to graduate with an average $35,000 in debt — the highest in Canada. Yet almost 80 per cent of future jobs are expected to require a post-secondary degree.

Federation president George Davison said it’s “hard to say” what kind of impact 18,000 signatures will have in a province with more than three million registered voters.

“It’s an indication that people are willing to put their name on paper and have those names sent to the legislature in support of post-secondary education,” he said. The federation is still collecting signatures, he added.

Davison said the 20 per cent cuts have had differing effects on post-secondary institutions.

“The College of New Caledonia in Prince George had 135 faculty layoffs there in the last 16 years,” he said. “The institution that was a comprehensive community college, had nine academic divisions covering just about every subject imaginable, now is trades and health sciences, with international [education] on the side.”

The college, where Davison works, saw its operating grant increase to $28.7 million this year from $22.2 million in 2001, but it wasn’t steady growth. Funding peaked at $29.4 million in 2012/13, then dropped annually until it started climbing again this year. (The operating grants for all public post-secondary institutions since 2001/02 are available here.)

“We’ve increased operating grants to the 25 colleges, universities and institutions by 40 per cent since 2001, significantly greater than the rate of inflation,” he said, adding the government announced an additional $42 million for tech education earlier this week.

“Overall it’s a package where students get a great deal,” Wilkinson said. “We have a two per cent cap on tuition growth, so that the students get a very reasonable price of $2,500 a year to get a good quality education in the college system.” 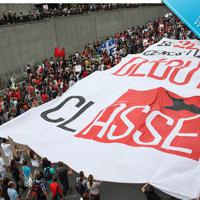 The Case for Free Post-Secondary Tuition

The federation says that while faculty positions have been cut, since 2002 senior administrative positions have increased 50 per cent and executives’ salaries doubled. In part this is due to the transition of five institutions from university colleges to teaching universities, and Thompson Rivers University’s change to a research university in 2008.

The union would also like to see the provincial government return to consulting with post-secondary institutions instead of making top-down changes.

“Things like the Skills for Jobs Blueprint was done with no consultation with institutions at all,” Davison said, referring to the 2014 document that prioritized funding trades training.

“Taking a portion of the operating grants and focusing it on the government’s priorities may not be the regional focus.”

While none of the provincial parties have released their post-secondary platforms yet, Davison says the situation was better under the previous NDP government, which froze tuition from 1997 to 2001 and worked in collaboration with educators on the future direction of post-secondary education.

The Tyee reached out to Fleming for comment but did not hear back by deadline.