British Columbia’s much-hyped liquefied natural gas (LNG) boom hasn’t done much except fill the BC Liberal Party’s coffers. In the last four years, the party has received over $1 million from fracking, gas pipeline and LNG companies.

This includes $338,041 from Encana, one of the largest fracking players in B.C.’s northeast, and $63,500 from Woodfibre LNG, who let Premier Christy Clark announce its final investment decision in November 2016.

Meanwhile, the government has made shipping fracked gas to Asia its top priority at the expense of local communities, the global climate and the public purse. Projects are stalled, up for sale or dead in the water all along the B.C. coast. That would be good news for the environment if it weren’t for the mess this obsession with LNG left behind.

British Columbia used to be the leading jurisdiction in North America on climate change. Thanks to the prospect of a brand new dirty fossil fuel industry, we’ve fallen far behind. Endless stalling tactics and shameful misinformation have been used to stop climate policy from doing exactly what it was designed to do: prevent the growth of an extremely high-carbon industry.

One of the first things the province did when LNG began to rear its head was to declare the gas “clean energy” so it would qualify under B.C.’s Clean Energy Act. This began an effort to paint our most polluting industry as somehow beneficial for the climate. It was all utter nonsense, as research from the Canadian Centre for Policy Alternatives shows that firing Chinese power plants with BC LNG is even worse over the short term than coal.

But that didn’t seem to matter.

It was already clear the government would miss its own 2020 target. So they assembled their Climate Leadership Team who worked for six months to propose a credible path to getting back on track. Instead, the province stalled another eight months before announcing that it would ignore the plan and focus on replanting forests — of dubious value to the climate.

Nothing exemplifies dubious value to the climate like the Site C dam, yet another “clean energy” project. Coming in at a whopping $9-billion cost to taxpayers, the dam’s original intent was to electrify a boom in fracking infrastructure in the northeast resulting from LNG development.

With no boom incoming, the government instead handed LNG companies an even bigger bailout. In November it approved a new “eDrive” hydro rate for LNG plants, lowering costs from $83.02 per megawatt hour to $53.60, or about half the expected cost of the power from Site C.

That publicly subsidized power worth $34 million a year was the deciding factor in Woodfibre LNG’s final investment decision, according to the company.

Bankrupting BC Hydro is only the start of the giveaways to the LNG industry. Pacific NorthWest LNG’s tax deal in 2015 saw its tax rates slashed in half for the next 20 years, and ensured they would pay hardly any tax until the plant has been paid off.*

That would likely take the first eight to 10 years of operations, which means taxpayers would effectively be on the hook for any lost revenues. 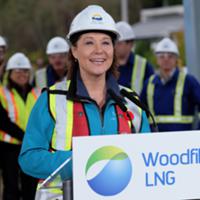 A blueprint for future agreements, it also promised to reimburse the company if any future governments raised taxes, eliminated fossil fuel subsidies or increased the carbon tax.

Despite the shocking lengths the government has gone to try and prop up its LNG plans, the industry is so far little more than a handful of empty lots.

About 30 minutes down a gravel access road on the side of the Douglas Channel there’s a clearing roughly the size of a soccer field — the site of Kitimat LNG. It’s been sitting there empty since the owner cleared the site in order to hold onto the permits it was granted in 2008.

In the meantime, the project’s owners have changed completely. Originally a partnership between U.S.-based Apache, Encana and EOG Resources, the latter two sold their stakes to Chevron in 2012. Then in 2014, Apache backed out and sold its 50 per cent stake to Australian Woodside.

If this is starting to sound like investors flipping a Vancouver condo, you’re right on the money. With so much uncertainty in the industry, LNG projects are becoming the latest speculative gamble for multinational fossil fuel companies. No surprise that as soon as Pacific NorthWest LNG got its approvals, rumours swirled that it too was up for sale.

Meeting our climate commitments, making responsible infrastructure investments, ensuring government coffers see their fair share and communities get the benefits of projects — all of these are indisputably in the public interest.

When the most powerful industry on the planet is able to throw unlimited money into our political process, it raises glaring questions about who the government is really representing.

On both sides of the border, it’s become painfully clear that to fight climate change we must first sever the fossil fuel industry’s hold on our democracy. It won’t be easy, but life itself depends on it.