The most intriguing Conservative leadership contender so far is Michael Chong, and I don't just say that because he's a half-Asian guy like me who favours carbon pricing and democratic reform. 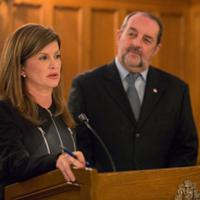 Last weekend the Manning Conference in Ottawa offered a chance to hear from five prospective leadership candidates, of which Chong may have the best mathematical chance of becoming leader.

As a fiscally conservative democrat who worries about climate change, Chong is part of an emerging faction of Green Tories. But his vision of Parliament does not exclude social conservatives, Libertarians or former progressive conservatives -- creating a large potential leadership coalition.

Michael Chong is best known for his maverick Private Member's bill, the Reform Act, which attracted unprecedented support from MPs of all parties. The bill works to weaken party discipline in Parliament and was seen as an act of defiance toward the Harper PMO. Part of Chong's pitch as leader is that he would continue to decentralize power.

''My view is that by lightening the party whip and moving power from the party leaders, including the prime minister, to elected Members of Parliament, members will be able to vote more freely and, in turn, better reflect the wishes of their constituents -- including those constituents that didn't vote for them,'' Chong said in an interview.

While he's open to changing the voting system, the Ontario MP stresses that sequencing is important. ''We need to reform the party nomination process, the way parties control things, as part of the debate on proportional representation.''

Having kept a low profile during the Harper years, Chong hit the stage in Ottawa with a powerful self-introduction in the form of a ''public narrative'' (also known as the ''Story of Self, Us, Now,'' taught by legendary U.S. organizer Marshall Ganz and employed to great effect by Barack Obama at the 2004 Democratic National Convention).

Showing a black-and-white photo of his Chinese father as a toddler, Chong told the story of two families -- one from Hong Kong, the other from the Netherlands. Both were defended by Canadian soldiers in the Second World War, later inspiring them to emigrate to Canada. Chong's father worked in lumber camps in B.C. to put himself through medical school then married Chong's mother, who is white.

It's a story of hard work, uphill battles, and love that is instantly recognizable to millions of Canadians.

And that's the point. ''The choice we face is to figure out how we are going to broaden the reach of our party,'' says Chong. ''I think that starts with telling our stories that Canadians can identify with and re-earning their trust.''

Chong is painfully aware of that lack of trust, especially on one crucial file: ''I think Conservatives need to rethink our positions on the environment, in particular on climate change.''

The battle over oil

Canadians for Clean Prosperity, a conservative NGO, released a survey in the lead up to the conference that found a startling pattern among former Conservative supporters. Fifty-three per cent of those that abandoned Harper between 2011 and 2015 were self-identified climate voters.

''The challenge for the CPC and their next leader is to give Canadians a credible, conservative action plan to address the threat of climate change,'' said executive director Mark Cameron in a release. ''Failure to do so could mean the continued decline of the Conservative vote share.''

Data from Elections Canada shows that across Canada, the Conservatives experienced a net loss of just 234,744 votes in the last election. But 149,075 of those lost votes were concentrated in the province of B.C., where unwanted pipeline and oil tanker projects became a symbol of Stephen Harper's disdain for the environment.

Some within the conservative movement are still in denial.

One conference panel featured ''skeptic'' Ross McKitrick, who questions the scientific consensus that humans are changing the climate. McKitrick showed slides of declining air pollution since the 1960s in Toronto and Montreal to argue in favour of building bitumen export pipelines. Another of McKitrick's slides showed a photo of a trophy hunter astride a dead grizzly bear, with the title ''Hunting the Big Game.'' The big game, he argued, is ''environmental alarmism,'' not carbon dioxide in the atmosphere.

But things are changing quickly in the conservative tent. Three years ago Ezra Levant pretended to fart on stage with Preston Manning, sarcastically apologizing for creating greenhouse gases. Then, the audience roared with laughter. This year, the unease over McKitrick's denier schtick was palpable.

''We're limiting our future by being so closed-minded,'' said Kailey Vokes afterward. A conservative activist from Keswick, Ont., Vokes expressed her frustration at the party's ongoing attack on carbon pricing in the House of Commons: ''I'm sick of hearing it. It's not really productive.''

''I did an internship at Queen's Park in 2010,'' she said in an interview. ''Preston Manning came and gave a presentation to the interns and he talked about Green Conservatism and I was like, yes! Finally, somebody speaking my language. That was six years ago and here we are at the Manning Conference and they bring up this topic every year, and still we can't seem to figure it out.''

Things may be reaching a tipping point. Whether or not Michael Chong runs for leader, the Conservative Party is likely to face a serious internal debate on carbon pricing and the future of oil.

At another panel this weekend, a staff member from Clean Prosperity got up and challenged spokesmen from the Fraser Institute and the Canadian Association of Petroleum Producers. Both were pleading for more pipelines, lower taxes and fewer rules to get Canadian oil ''to market.'' Unfortunately for the oil sands, the market, Kaitlin Szacki pointed out, doesn't seem to have room for oil that costs $50 or $60 to dig out of the ground.

Surprisingly, that point was reinforced by Roxanna Benoit, vice-president of public and government affairs at Enbridge. The energy transport company behind the controversial Northern Gateway pipeline proposal is now investing in wind and solar as it moves to eventually get out of the oil sands. Kaitlin Szacki

''You have to skate to where the puck is going,'' said Benoit, showing slides from the International Energy Agency predicting a decline in oil demand growth. ''If you accept that reality, then there's no upside in taking ideological positions on one form of energy over another. There's no upside to taking an ideological position on how long that transition will take. The shift to market diversification has been cast.''

Three years ago it was unthinkable: uncouple Stephen Harper's party from its single-minded devotion to raw bitumen exports? It was the sticky black blood in Conservative veins. But with the global crash in oil prices has come a crash in conservative electoral fortunes. Only Saskatchewan and British Columbia, it was pointed out repeatedly at the conference, still have right-wing governments.

If the Conservative leadership race is about building a party that could once again govern the country, delegates will have to grapple with a longer time horizon than the usual election cycle. That means not only coming to grips with climate change, but also offering solutions. As columnist Chantal Hébert said on the conference's opening panel, it's hard to be a viable modern party with no environmental policy.

That will be even more true by the 2019 election.

Whoever wins the Conservative leadership next spring will take the helm of an organization in the midst of an identity crisis. Another strongman leader like Harper would likely cause the party to splinter. By contrast, Michael Chong appears most able to hold the big blue tent together while growing the party's appeal.

One more point in Chong's favour: he has the ear of Preston Manning. When it comes to brokering coalitions, reading trends in the electorate, and grooming future leaders, no one is more influential within the conservative movement than the Reform Party founder.