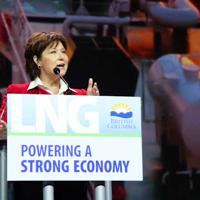 Imagine being a lousy poker player facing some of the world’s sharpest aces and you see the odds that the B.C. Liberals will lose big money to get giant liquefied natural gas companies to invest here.

The only consolation for the government is that taxpayers will pay for the LNG players’ winnings.

This week the B.C. Legislature resumes sitting to table legislation setting the taxes on LNG exports and the environmental standards that will have to be met by the companies considering building extremely expensive plants to process exports to Asia.

And the B.C. Liberals are already losing at your expense, as expert LNG card players see a mark at the table with more money than skill.

Premier Christy Clark is desperate for a deal, having bet everything in last year's provincial election on her ability to create an LNG nirvana in B.C., with a $100 billion windfall and 100,000 new jobs promised to voters.

Card sharks like the CEO of Malaysia's Petronas -- Shamsul Abbas -- played the province like a sucker last month, threatening publicly he was "ready to call off" its planned $11 billion Prince Rupert LNG plant because of the "lack of appropriate incentives."

"The project remains uncertain and I doubt we will be able to make a positive (final investment decision) by year-end," said the master player.

And Monday he was back at it, warning that unless B.C. lowered taxes, Petronas would delay the "marginal" LNG plant by 10 to 15 years!

"In our last portfolio review exercise, the current project economics appeared marginal," Shamsul said. "Missing this date will have the impact of having to defer our investments until the next LNG marketing window, anticipated in 10-15 years."

Stuck at the table

Can you feel the money leaving your wallet now?

That's because the B.C. Liberals quickly backtracked from earlier statements that there would be a seven per cent tax on LNG net income after capital costs are recovered to now saying it would only be "up to" seven per cent.

Finance Minister Mike de Jong says there "won't be any surprises" in the tax -- and that's likely true, since the only surprise would be if it remained at seven per cent.

Clark says she is "very confident that we are going to conclude that negotiation successfully."

So am I -- very confident that we are going to give up billions of dollars because Clark simply cannot afford to walk away from the table, especially after Apache announced it was giving up on B.C. and ending its equal partnership with Chevron for a $15 billion Kitimat LNG plant, leaving the project in doubt.

"We got back from the industry that the numbers we hit made sense," Coleman said last week.

Oh, I bet they made sense, since every tax point is worth billions to either B.C. or the LNG companies.

After Petronas first upped its ante by threatening to leave B.C., Coleman tried to keep a poker face.

"We'll probably laugh about this when it's all over," he said in response.

Actually, the last laugh will go to Petronas and the other LNG companies when they get exactly what they want from the B.C. Liberals -- and then chuckle all the way to the bank.