Asked who the three BC Green Party MLAs are most likely to collaborate with in the legislature, Sonia Furstenau responded with a story that involves cross-party allegiances forged during the fight she led to stop the dumping of contaminated soil in the Shawnigan Lake watershed.

As the issue gained profile, three city councillors visited the area from Port Moody, the Lower Mainland community that was a source of the soil, to see for themselves what was happening. One of them was Rick Glumac, who was himself elected Tuesday in Port Moody-Coquitlam running for the NDP.

When Furstenau, 46, was elected in Cowichan Valley this week running as a Green, Glumac called to congratulate her, she said. “My reaction to that was sheer delight.”

Furstenau was one of three Greens elected, along with Adam Olsen in Saanich North and the Islands and leader Andrew Weaver who was re-elected in Oak Bay-Gordon Head. After the initial count, with final results not expected for a couple weeks, the Liberals have 43 seats and the NDP 41, so neither party can win a vote in the legislature on its own.

Who the Greens would support if the minority result sticks has been the subject of much speculation. Retired University of Victoria professor Norman Ruff has been quoted saying the Greens would likely support the BC Liberals while columnist and former NDP strategist Bill Tieleman argues that an alliance with the NDP would be a better fit.

‘Everyone is being nice’

Furstenau said she’s heartened by how all the parties have been talking in the last few days about cooperation and collaboration. “That’s already changed politics in British Columbia.

“What I like right now is that everyone is being nice,” she said.

Bill Routley had represented Cowichan Valley for the NDP, but didn’t run again. Furstenau said she knew him from his help on the watershed issue as well. He called on Wednesday and they set up a meeting with him and his constituency staff to make the transition, she said.

And Alistair MacGregor, the MP for Cowichan-Malahat-Langford from the federal NDP, also called to congratulate her, she said. “This is what it should be like,” she said. “We’re all working in our communities toward the same goal. We’re going to do the best job when we put partisanship aside.”

Acknowledging that all of the people she had named were NDP politicians, Furstenau said, “I haven’t talked to any Liberals yet.”

She added, however, that two years ago when she took part in a campaign school at the B.C. legislature, BC Liberal speaker Linda Reid was supportive, telling her to “‘keep doing the work you’re doing in your community. You’re doing the right thing.’”

In the fight about contaminated soil, environment minister Mary Polak, who won re-election in Langley, was the face of the government.

Minority governments usually generate excellent results, Furstenau said. “It forces people to start working together,” she said. “We can move beyond the era when partisanship seemed to infuse everything.”

She said that banning big money and reforming the electoral system are key. “Good policy. That’s the priority here. Good policy that serves the people of British Columbia.”

The three Green MLAs are independent and will represent their communities, but they’ve been working together for a few years now. “This isn’t just three people who happened to get elected who are getting to know each other,” she said, noting that her mother officiated at Olsen’s wedding. “I consider them to be very dear friends as well as colleagues.”

On the all-important decision of what policies to support in the legislature, and whether they agree to collaborate with another party, they will act together, Furstenau said. “We will make decisions together,” she said. “Our values match. Our visions for this province all match. We’re all on the same page.”

Olsen, 41, is a former Central Saanich councillor who served as an interim leader of the BC Green Party after the 2013 election. 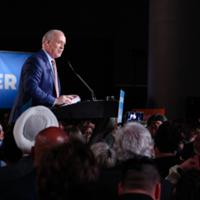 Clark Is Done; NDP and Greens Now Need to Deliver the Change BC Voted For

Olsen said they will represent their communities first while finding ways to work together. “I know Andrew and Sonia are very thoughtful. I’m very thoughtful. We’re very serious about doing what’s right for our province.”

Asked about Clark’s election night comments about the environment, which she made after running a campaign where she hardly uttered the word, Olsen instead talks about the Green Party.

“We’ve been committed to that from the very founding of our party,” he said. “The environment’s very important to all of us. The environment has not become more important to us over the last five years. It’s always been important ... We talked about intergenerational equity in this election.”

The presence of three Green MLAs will make a difference, he said. “The BC Greens are going to have an influence on the way other parties do business, their priorities and how they function.”